At present, to cool my T-Bird 1333 CPU, I am using an OCZ Gladiator II, with a 42 cubic feet, black label monster! Which, as per what you read on web sites, is VERY LOUD. The Quote “YOU GET USED TO AFTER A WHILE” kinda’ wore off after a bit, although I was blessed with very nice temperatures: 35-46C (depending on load and Ambient temperature) and was very stable 1430 MHz. Not bad for an Abit KT7 non-A or Raid, which is now maxed out on multipliers 12.5 and FSB of 115.

Anyhow, the noise prompted me to dip my toe in the water “as it were” and plumb for a water-cooling rig.

I spent a lot of time browsing the Web through almost endless information on the subject, and found that the BE Cooling’s offering of their Copper Waterblock seemed to stand out from the crowd, properly because of the ribbed water galleries inside the block, giving additional surface area – moreover, it only cost $30.

Mmm, looks nice – Beware of Swarf still inside block though!

BE Cooling also offered a nice solution for the pump and reservoir for $50. 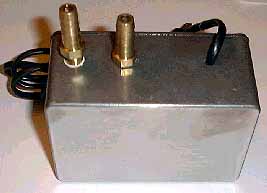 Not much more to say it’s true – seems to move around enough coolant as well.

The case was supplied by Overclock UK
And is as follows:

Next, I went to a local Junk Yard, and Asked the Chap there if he had any old Heater Matrixes [cores]? The Owner leaned over his desk, and almost magically, one appeared.

He puffed so hard down the holes his cheeks turned red; he just held that pose for too long (I had to hold back from laughter).

Anyhow, it passed the Junk Yard Man Blow test with flying colours! So it’s OK for me. I walked away with 2 of them – they originally lived in a Mk 4 Ford Escort, which seem to be just about the right size for the case. Better still, after I explained what I wanted them for, I only had to part with £10.00 for the pair ($14) – he must of felt sorry for me, although he did say “Get hot them computers, don’t they?”. He must have an Athlon as well, I thought.

I was totally gob smacked with these Heater Matrixes. Car manufacturers have over time evolved these to a very fine art, and I have struggled to find any aftermarket product which came even close to this quality. Also, I feel happier because there recycled. Be careful though – look for any signs of seepage and give them a very good flush out before using. 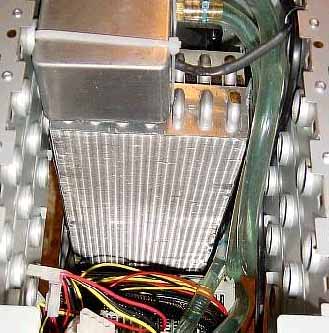 Wow! These guys have huge Cooling potential; count all them Fins!
Erm, yep, there’s 2 of them in there as well!

The Matrixes needed a little modification at the entry point; I used a hack saw to remove the 3″ strait plastic pipes which originally came out from the ends, then attached 2 copper micro bore 90 Degree bends, per matrix. These are firmly held in place with epoxy resin. However, before they were glued, both the copper 90 degree outlets and the inside of the plastic entry point were Keyed-up with emery paper – this gives a much nicer surface for the epoxy resin to stick to. 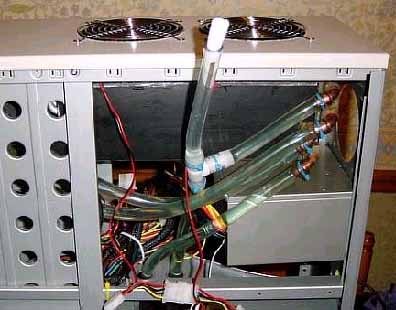 This is what they look like from the side. Note: hottest radiator (from CPU) is closest the top fans, keeping 2nd matrix uncontaminated from its heat.

I carefully cut out some “Plastic Card”, (Wonder material, from your local modelling shop) and proceeded to glue them in place, sealing the edges and ends with Clear Silicon. This will ensure the cool air that is sucked/blown through will not escape from the edges.

The Silicone also came in handy for sticking the matrixes to the pair of 120mm fans as well. I upturned the box and made sure the silicone squeezed up through the screw holes on the fans; then, with a wetted finger, I dabbed down the worm almost flush to the lip, effectively making a silicone bolt on each corner of the fans.

To be double sure when the silicone had fully cured, I flipped the box up the other way, and then ran two fine seams of silicone from the bottom of the fans to the top Heater Matrix, stopping all air leaks and giving additional adhesion.

The Fans I decided to use were the most powerful 120mm fans I could find:

Manufacturer: YS-Tech
Model: FD1212387S-11 120mm 4pin
Description: The daddy of the YS-Tech range is here :)Giving you even more CFM than before, these 38mm deep fans kick-out an incredible 135CFM at 8.52W.The most awesome performance we have seen yet. For full spec. visit YS-Tech

Again, supplied from Overclockers UK. These fans Rip! And yes – Metal Grill is advisable, because they will most certainly draw blood if your fingers get too close. I’ve used 4 of them, plus there is a hole for an additional 92mm fan in the back, so in total there will be 3 pushing filtered air into the case with the two mounted on the top of the heat exchangers sucking air out.

At full Bore (12 volts), these fans sound like a jet airplane; however, I intend to run these babies at either 5 or 7 volts. The theory is big fans moving at lowered voltages/rpms are almost silent. I may even go for an adjustable rheostat for total voltage control. I heard that a car dashboard dimmer switch would do the trick nicely (another trip to Junk Yard), but we’ll see.

The case Holes were cut using a drill, a Dremmel, time, patience, and safety goggles. This is really quite tricky – only advice I can give is take your time, and take your time. I said it twice because it’s important; if, like me, you took your time, the holes should look a little like this: 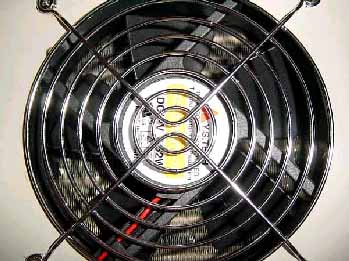 Nice clean edges – expect to take about 45 minutes per hole for a top job. (Still counting all them luvley fins). 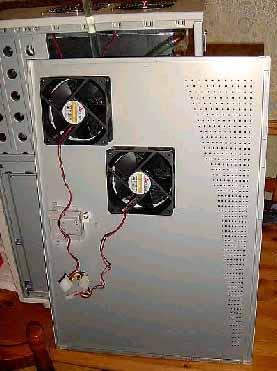 Here is the other two 120`s fans Dremmeled and mounted on the inside side of the case – plastic card will be used to block out all of them small holes in the case side. 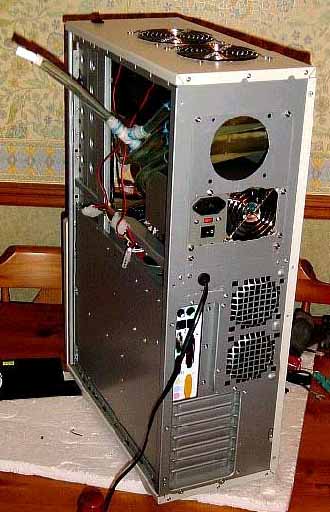 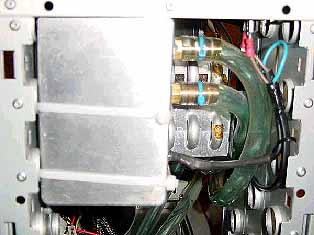 Rio pump and reservoir securely cable tied to the case; the 2 connectors going to the switch are mains live [i.e. house current], so they will have to be insulated very soon.

Here’s what she looks like from the outside with side panel on: 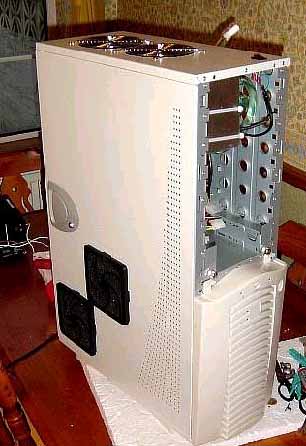 Notice top up tube is the highest point; any small bubbles left will collect there. 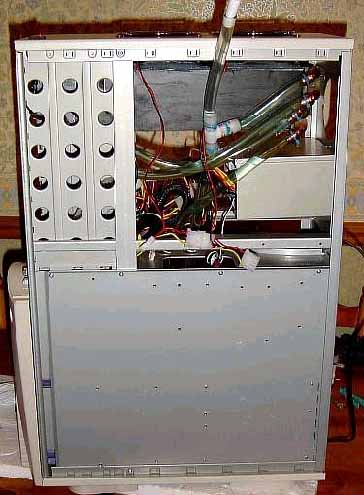 The Coolant mixture was made with 20% antifreeze to prevent corrosion, de-ionised water and a couple of ounces of Water Wetter. She holds around 2 litres of water, which may seem a lot, but the more head of coolant, the better.

Getting all the air out of them tubes was something else – it involved tilting, turning and topping switching on and off, leaving the bubbles to settle and doing it again. The tubes were cable tied only when all the air was removed. Sealing bung – it was made simple with the use of hardened silicone, which had been left and set in the nozzle. 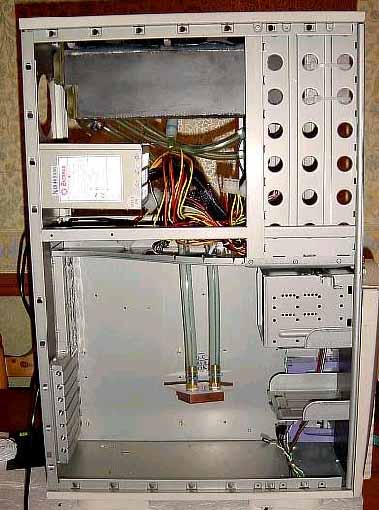 After a few days of solid testing with no leaks, she’s ready for the rest of the electronics.

I will use a new motherboard, which will support PC 2400 DDR, as I intend to squeeze as much as I can from the front side bus. The Asus A7V266 looks like a very nice solution, because I already have the Promise Fasttrack 100 TX2, so lack of RAID controller is not a concern. Also, these boards have a 5/1 PCI divider!

Wait for Part II and we`ll see what she can do.

Didn’t want to hack up any of my CPU coolers so I came up with this; they got me another 15 MHz on the old DDR 🙂 Email SurlyJoe