HyperX sent word today they are releasing a 128 GB DDR4-3000 MHz memory kit running at an impressive 3000 MHz. The kit is said to offer timings at 16-16-16-36, and consists of eight 16GB modules. Here is the press release we received today.

Fountain Valley, CA – May 11th , 2015 – HyperX®, a division of Kingston® Technology Company, Inc., the independent world leader in memory products, today announced that it has created the world’s fastest DDR4 128GB memory kit running at an astounding 3000MHz. The kit consists of eight 16GB HyperX Predator modules (16GB x 8) with ultra-tight 16-16-16-36 timings and XMP profiles for easy and stable overclocking. The accomplishment was achieved using the MSI X99 MPOWER motherboard in an eight module, quad-channel configuration along with an Intel® Core™ i7 5820K processor. 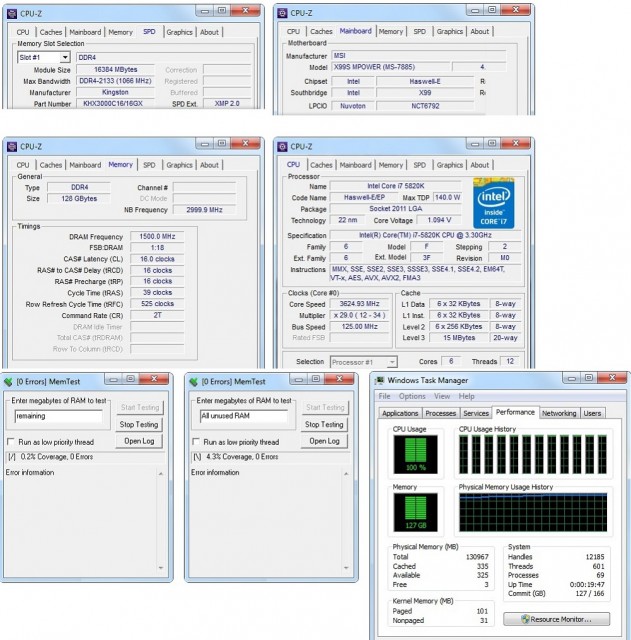 During Computex Taipei, HyperX will unleash a high-performance system featuring the upcoming 16GB modules powered by the recently released HyperX Predator M.2 PCIe SSD. The live demo will take place during the HyperX Roadshow Experience from June 4-7, 2015, at the ATT 4 FUN center, in Taipei. More details will be forthcoming about availability and pricing for HyperX Predator 16GB DDR4 modules and kits.

HyperX is the high-performance product division of Kingston Technology encompassing high-speed DDR4 and DDR3 memory, SSDs, USB Flash drives, headsets and mouse pads. Targeted at gamers, overclockers and enthusiasts, HyperX is known throughout the world for quality, performance and innovation. HyperX is committed to eSports as it sponsors over 20 teams globally and is the main sponsor of Intel Extreme Masters. HyperX can be found at many shows including Brasil Game Show, China Joy, DreamHack, gamescom and PAX.