I’ve been looking for a way to adequately cool a computer case that doesn’t make much noise so that it can be used as an entertainment center. It would be highly objectionable to be watching a DVD and have to put up with a noise background of many fans. Looking for another alternative, I reasoned that I needed a way to get the cool air outside the case directly to the CPU. No additional fans allowed.

The design rules are:

This project utilizes a cardboard Duct to direct cool air from outside of the computer case directly to the fans cooling the CPU. The air used by the CPU cooler is no longer preheated by elevated case temperatures. A secondary effect is improved case air circulation. The air brought in through the Duct circulates through the case and is exhausted out through venting, or exhaust ports. This improves overall cooling effectiveness without adding any additional fans, and generally, without an increase in audible noise.

The sample situation is:

This project involves a small case packed with some pretty good heat sources. The only other fan in the system is the power supply fan and it was exhausting air. After a little testing, I found it was better to have this fan configured as intake when used in conjunction with the Duct. The end result is a system that cools significantly better with the cover on as opposed to with the cover off. Want some numbers?

I went to Radio Shack and purchased a small indoor/outdoor thermometer. I wedged the little temp probe between the backside of the heatsink and the slot 1 CPU. It was in contact with the heatsink and obstructed from any direct airflow (completely isolated from the ducted air).

I booted up Win98SE, fired up NFS4 (Need for Speed: High Stakes), loaded up a game replay and just left it looping. This left the CPU and video card cranking away simulating a game environment. At this point, there was no case cover in place, but everything else was as it would be for later tests.

All temps in degrees Fahrenheit.

If I were dealing with more heat from a peltier cooler, I would probably turn all the fans over to exhaust all the heat coming off the CPU heatsink. This would reduce the case temps but sacrifice some CPU heatsink temp.

Hmmm, wonder how it would do with a 1.2GHz Tbird?

How do you make it?

Ok, lets get to the guts of the issue: The Alpha heatsink/fan cooler made this solution quite simple. Actually, any heatsink/fan that has a fan mounted similarly, whether single or dual fans, is an excellent candidate for this kind of modification.

Lets look at the finished project. Note that there are no case fans (it does have a power supply fan configured as intake). The area in the front of the case that is sometimes used for a second case fan is left open for use as an exhaust port. There is a Vent Cover covering the vent that is used by the Duct. This Vent Cover was purchased for $1.20 at the local Home Depot. More on that later. 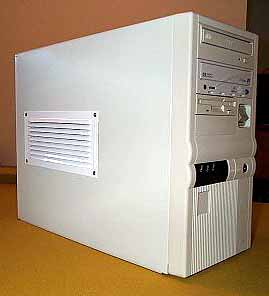 Lets start the disassembly. Here is the case with the Vent Cover removed. Note the first signs of what goes on inside. There is a rectangular cutout the size of the Duct – visible is the top of the Duct. 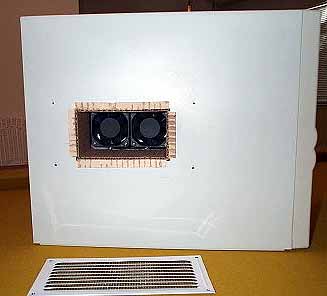 Here is the case with the Duct slipped out of its nesting place. It may be a crude looking duct but it is cheap and very effective. The key to the installation of the Duct is a clear path (no cables obstructing) to the fans on the heatsink. 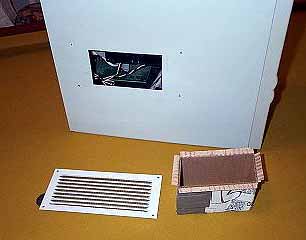 Now on to the Duct. The Duct was fabricated from corrugated box cardboard. It was sized for a .06″ clearance around the fan body(s). Two identical halves were pieced together and affixed using duct tape. A flap was created to keep the Duct from slipping through the cutout in the case. The corrugated part was removed from the flap to make it easy to mount flush. A kitchen cutting board is handy for this job. 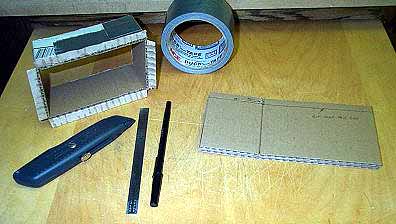 The Vent Cover was purchased from Home Depot in its large size as shown for $1.20. Home Depot also had this Vent Cover in Mill Finish (unpainted) for $1.00. It was reduced to the size used as shown using shears – very easy to do. 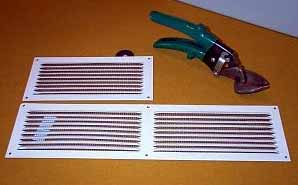 I took no special precautions on cable routing and I was amazed at the lack of hot spots within the case after implementing the Duct. Floppy disks left in the floppy drive and CDs left in the CDROMs for extended periods of time were no longer warm to the touch. And best of all, this case is very quiet.

SUMMARY: A very competent heatsink for Socket A cooling – Alpha class! You’ve all seen fans before – this is more interesting. Taisol has come up with a very nice heatsink – model # CGK742092 (you would think they could