The modification discussed in this article requires opening a power supply. There are dangerously high voltages inside and opening a power supply may cause injury and will void your warranty. Neither the author or Overclockers.com will be held liable for any damages or injury should anyone elect to try what’s described here.

I’ve been running the system discussed in this article for several months now. Having a RAID of four 7200rpm disks and two Athlon MP 2000+ CPUs stuffed into a small Antec SX600 series case has brought up some cooling issues.

The case has two intake fans and one exhaust fan, all 80mm. You can see a picture of the case I’m talking about here. I am using an Antec TruePower 550 watt power supply to run all of this.

With all of this stuff crammed into such a small space, ventilation is hard to come by. With two 50CFM intake fans and one 50CFM exhaust fan, I was still running into heat problems if I leave the side panel on with the computer running [email protected] on each CPU.

I had plenty of cool intake air being sucked in from my air conditioned room. I needed more exhaust to get it out of the case. I’m not much of a case modder, so I wanted a way to exhaust without cutting holes in the case.

The only other exit is the power supply. The TruePower 550 is just like any other AMD-specified dual fan ATX power supply. It has a larger 92mm fan on the bottom pulling air off the hot CPUs and into the power supply, then a smaller 80mm exhausting the case air and the warm PSU air out the back. These fans don’t do a lot for two reasons:

I figured that if I replaced the fans with higher volume models and connected them to the +12 output of the PSU, they would pump a lot more air and run at full speed. I found some replacement fans I had laying around: 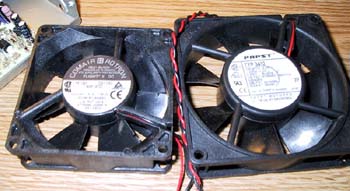 The 80mm is a Comair-Rotron FE12K3 Flight-II rated at 43CFM. The Papst model is a type 3414, rated at 55 CFM. I figured these would improve airflow a bit. These are both excellent fans, heavier and sturdier than your average 80x25mm computer fan. I had them on hand, but any old fan would work. 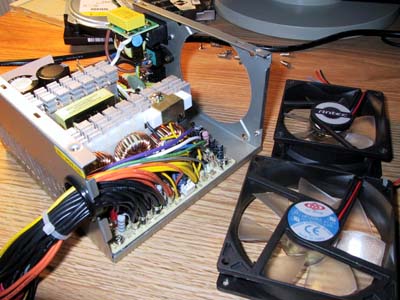 Next I used some splicing connectors from Radio Shack and tapped a +12 wire (yellow) and a ground wire (black). Now I could get a steady 12 volts to the fans, not the thermally regulated voltage from the normal fan circuitry. 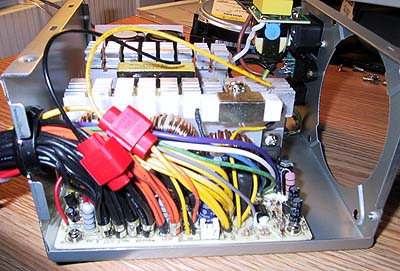 Then I soldered the fan wires on, put them in the case and put it all back together. It got me here: 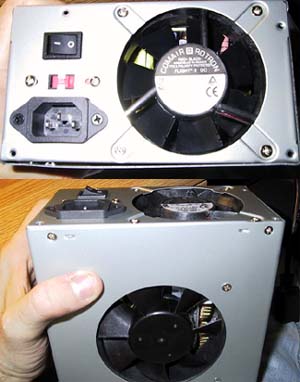 I omitted the grills on purpose. Even though they’re nice wire grills, I wanted as little airflow obstruction as possible. I keep the cabling in my case neat and nobody pokes around inside of it, so grills are unnecessary anyway.

I put the power supply back in the system, powered it up and let the PC begin doing its work folding proteins and being a file server. After two hours, my case temp was 29.5C (85F). My room temperature was the same.

The 92mm fan’s higher volume overpowers the 80mm fan, so there is some inefficiency in the design. Doing this again, I would use a higher volume 80mm fan and a lower volume 92mm fan, with the 80mm being equal or slightly greater in capacity than the 92mm. The back pressure the slower 80mm fan creates on the 92mm adds some excess noise and significantly impacts the efficiency of the whole thing.

In spite of this tiny imperfection, an almost 6C (10F) reduction in case temperature also lowered my CPU temperatures by about 3C on each CPU. The only drawback is a very slight increase in noise that’s barely noticeable. I was considering moving the innards of this system to a bigger case with better cooling, but now I’m satisfied with the temps.

Feel free to email me, or get a hold of me in the Overclockers.com forums as donny_paycheck.

A lot of people want or need to add heatsinks to devices that have no provisions for mounting one: video card memory chips, the clock generator on Asus P3V4X motherboards, some UltraATA controllers. Popular methods involve thermal tape (commonly nicknamed

The PolarFLO from Horse of Iron