Overclocking the retail version to the mid-1600s. — Joe.

SUMMARY: The fun is back! Intel’s Celeron 1200 (or PIII 1200) overclocks well and could be a good upgrade CPU. 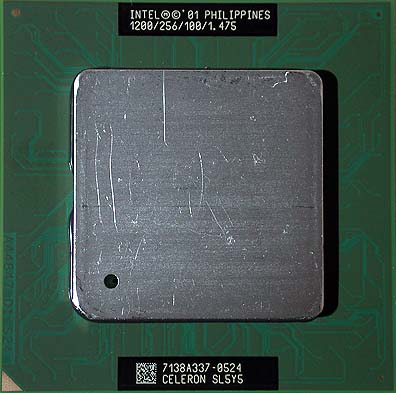 Where’s the CPU? Under the metal cap – like the old Pentium CPUs, except for the little air vent in the lower left hand corner; lapping anyone?

Intel’s new Celeron 1200 is, in fact, a 0.13 Tualatin, with the sole difference being that is runs at 100 MHz rather than 133 MHz (Ed has some background on it HERE). The only problem with this CPU is that, due to new voltage requirements, this CPU needs a Tualatin capable motherboard, so it’s not plug compatible. Apparently PowerLeap is making an adapter but it’s not cheap – something like $60.

James Anderson sent in his experience with a Celeron 1200 HERE. Rather than use air, I used watercooling.

The second thing I noticed was the minimal temp rise when stressed – about 2C over idle temps. According to Motherboard Monitor, idle temps were 37C and under Prime 95, 39C (these are on-die temps). Under stress, watercooling the CPU resulted in a rise of not more than 4.5C over ambient temps (measured at the waterblock’s base).

The third major item I noticed is that hiking the voltage beyond 1.65v did not make any difference in performance. The most stable speed I attained was 12 x 138; this required only 1.55 volts. Stability here is defined as running the UXD Burn-in suite for 12 or more hours with no errors.

The Iwill also consistently under volted the CPU – for example, setting it to DEFAULT voltage of 1.475 showed 1.42v in BIOS and Motherboard Monitor. I had no trouble setting various voltages.

For performance tests, I ran the CPU at the most stable low and high memory settings:

Slow memory settings do take their toll! I can’t see any reason to de-tune memory, at least with the system I had on hand. Looks like this CPU hit the wall around the high 1600s – upping voltage did not get me into 1700 territory with any stability. If this CPU is somewhat typical, 1600 (12 x 133) could be an easy 33% in-spec overclock.

Please note this is a RETAIL CPU – OEM CPUs may not do as well.

Intel’s Celeron 1200 looks like a nice CPU, all things considered – not expensive, overclocks well and decent performance. If you have an Intel system and want to “keep it in the family”, going the Celeron 1200 route might be the way to go.

It will require either a new motherboard or an adapter, in addition to the CPU. But if you like Intel and don’t want to spend gobs of money on an upgrade, for about $200 you could use your current system components and it should keep you “competitive” for at least another year. Let’s hope Intel keeps these around for a while. 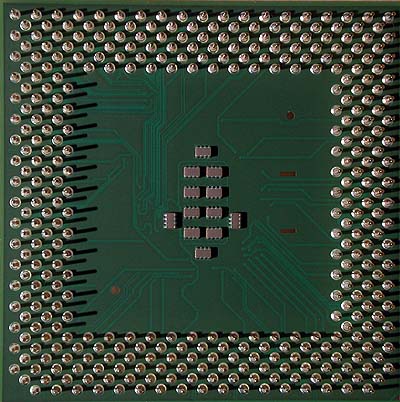 A long-range look ahead, and why you may want to save up for a while. — Ed

Or maybe not. I’m not the most experienced overclocker in the world. I did ruin a perfectly good Duron 800 a couple weeks ago, though. Like many people, my hands aren’t the steadiest in the world. So although I had

I know Overclockers.com is listing less expensive CPU’s in the CPU Databases, but seeing that in the near future that P3 450s will drop in price to $248 in lots of 1000 and SSE will be needed in some games,