The purpose of this article is to take a look at Intel’s Processor Datasheets and discern what might be possible overclocking targets for different CPU series. The approach I’m taking is not to look for extreme overclocks, but rather what to expect with pad modding CPUs to run at stable speeds with standard cooling on motherboards that lack changing FSB settings in BIOS.

The “E” series dual core and subsequent processors are the subject of this article. The first clue as to what to expect from the “E” series was found in the Pentium D dual core datasheets. These CPUs were Intel’s first desktop dual core CPUs using the LGA775 mount.

One indicator of what might be possible is to take a look at the FSB Frequencies in the Intel Datasheets: 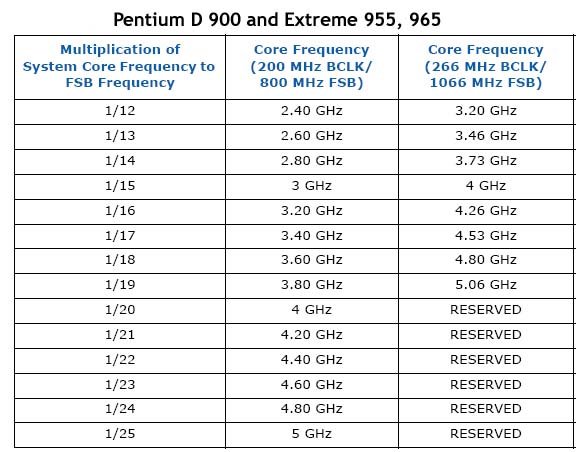 From this we speeds ranging from 2.4 to 5 GHz. Actual production CPUs topped out at 3.73 GHz. 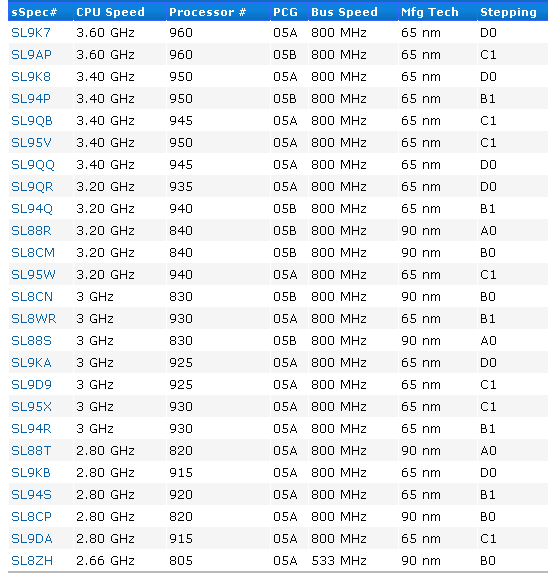 “E” Series overclocking turned out to be an easy overclock, not surprising considering the predecessor “D” series. The basic strategy I’m pursuing here is to identify easy, stable overclocking of low speed CPUs. One approach as to determining where a CPU Series might top out is to look at speeds in the preceding series. Based on the “D” series, it looks like 3.60 GHz is the extreme for the “E” series – back this off by 10-15% and we get 3 to 3.2 as an upper bound.

Another approach is to double the speed of the lowest CPU in a series – the E2140 came out at 1.6 GHz and doubling gets to 3.2 GHz; not a bad target! More likely back that off by about 10-15% for an overclock with stock cooling.

Intel’s FSB Frequencies range from 1.2 to 2.4 GHz based on the datasheet: 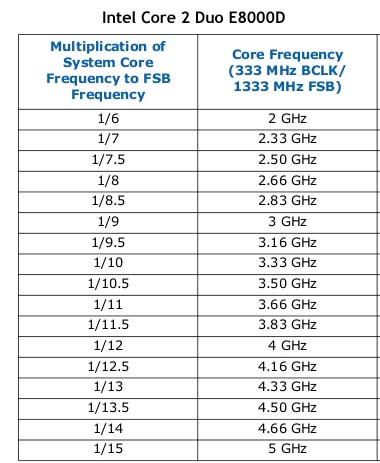 However, for pad modding the CPU, the E8000 series pad modding is only viable with a motherboard that will support 1600 MHz. The E6000 Series features a 266 and 333 MHz FSBs and the E4000 Series 200 MHz. The latter two series have more interesting options given their lower frequencies.

Intel dual core CPUs are great overclockers, especially for PCs with motherboards that lack overclocking settings, typical of systems from the likes of Dell, HP, etc. Pad-Modding CPUs in these PCs may turn a poky budget box into something with a little more punch at almost no cost.

How I Revived an Nforce2 Mobo With a Bad Bios

And our readers reply…. First, let me thank all who graciously responded – there are simply too many to publicly acknowledge! OK – so it turns out I was not so dumb after all. Replacing the 6.3 v, 1000 uf