Intel looks ahead and plans to invest $7 billion for new plants to produce 32 nm CPUs showing up late this year; AMD plans to introduce 32 nm parts most likely around 2011.

If ever there was a succint summary of the challenges facing AMD, this is it.

Chipzilla flexes its considerable financial muscle with a dose of cajones and places a $7 billion bet that the economy will start to pick up next year. AMD faces a delay in shareholder approval for its manufacturing spin-off to petro-dollar loaded Abu Dhabi.

Intel leap-frogs over its 45 nm CPUs and decides to launch 32 nm CPUs late this year – more cajones. AMD launches its moderately successful Phenom 45 nm CPUs and plans to have a 32 nm product around 2011.

Let’s put all this in some perspective – the PC market fell off a cliff last year, as reported by IDC:

“The decline of the PC processor market in 4Q08 was due to a precipitous drop in end system demand that quickly moved up the PC supply chain through OEMs and contract manufacturers to the processor vendors. While the fast reaction of the supply chain will help avoid significant inventories, demand remains so weak that IDC expects sequential processor unit shipment to decline in both 1Q09 and 2Q09. [my emphasis]”

Intel’s Atom CPU was the only bright spot in the picture, benefitting from the only PC segment showing strong growth – netbooks – which AMD has chosen not to address with a product. Intel is rolling out variations of the Atom which will yield more processing power – a good move and a validation that the netbook segment is not only here to stay, it is going to increasingly blur the line between netbooks and notebooks.

Nonetheless, at least the next two quarters are looking dismal, and right now it’s anyone’s guess as to how this year will shape up. In this environment, the safe course is to hunker down, trim costs substantially and wait. Intel, much to its credit, is taking the opposite tack:

“Intel sees the tough economic times as an opportunity for investment in the future, Otellini [Intel Pres/CEO] told the Economic Club of Washington, D.C. “Tough as these times are, we are not blinking,” he said. “Today, I am pleased to announce our intention to stamp the words, ‘made in America,’ on even more Intel products in the months and years to come.'”

Intel is literally shaking up the market with a very aggressive roadmap: 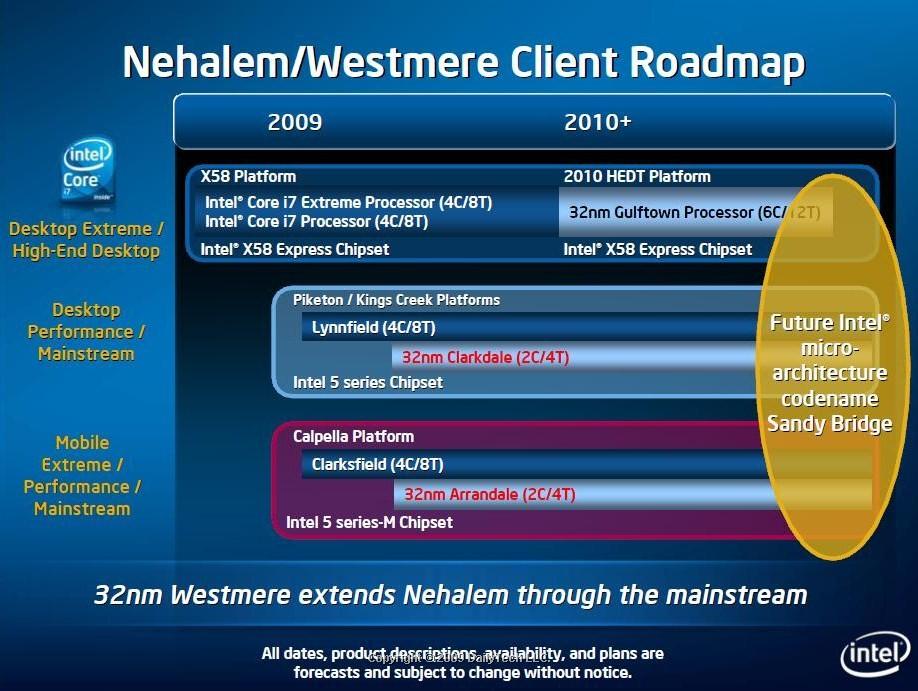 This move not only ups the best-power-CPU ante…

“Intel is reporting at least a 22 percent performance increase clock for clock over their 45nm process, and there are still many steppings to go before they go to market. Westmere also has seven new instructions, designed for accelerating encryption and decryption algorithms. All Nahalem and Westmere based processors will use DDR3 exclusively.”

Let’s be clear: The worst thing that can happen to PC consumers is for AMD to go belly-up. Intel is dominant and using its financial leverage to further cement its overwhelming position. AMD plays a role in keeping Intel “honest” to our benefit. AMD will have some share of the desktop market because right now its relative pricing to Intel is favorable to the Taiwan crowd. How long this lasts, who knows?

I think Anandtech had a very good summary of the CPU war in  this article:

“At the high end, if you can manage, the Core i7 is simply in a league of its own. Honestly, if I were spending close to $300 on a CPU today I’d do my best to make up for the differences in platform costs and go with an i7 over any Core 2 or Phenom II alternative…

Other than the clear cut i7 recommendation at the high end, thanks to aggressive price cuts and competitive CPUs, you can actually have your pick of which side you want to go with here. I’d say what it really boils down to is who can deliver the best retail pricing on CPUs and motherboards. Overclockers will probably prefer the Intel route as both Phenom II and Core 2 can overclock to similar levels, but Core 2 is faster at the same clock speed. Intel does have more room to drive prices down if it should so desire and perhaps it will, although I do worry about what will happen to AMD’s Phenom II strategy when Core i5 arrives later this year. While Phenom II is competitive with Core 2, remember that it’s an old architecture now. Turn to the Core i7 results for where AMD will need to start looking come this fall…”

And that’s the key point – Phenom II is old hat compared to what’s coming down the pike, and AMD does not have the resources to compete.

I pick up the New York Times early one morning, and see an eight-page ad announcing some grand opening (really extension) of a store, in fact, J&R, a place I’ve talked about for CD-Rs. Hmmm, quite a few specials here,