After all the overclocking triumphs with the Core line of processors, it is hard to believe that the latest Sandy Bridge CPUs from Intel will be more difficult to overclock. Bit-Tech.net is reporting that Intel has “designed the CPUs to deliberately limit overclocking” according to slides prepared by Intel:

A video to HKEPC and posted on YouTube (see from 2mins onwards) confirms the fact that only a 2-3 per cent OC via Base Clock adjustments will be possible. This is because Intel has tied the speed of every bus (USB, SATA, PCI, PCI-E, CPU cores, Uncore, memory etc) to a single internal clock generator issuing the basic 100MHz Base Clock.

This clock gen is integrated into the P67 motherboard chipset and transmits the clock signal to the CPU via the DMI bus. This means there’s no need for an external clock generator that used to allow completely separate control of all the individual hardware.

When you’re overclocking, you want to be able to push certain frequencies, such as the Base Clock and memory clock, but leave others, such as SATA, completely stable as they’re very sensitive to adjustment. Current motherboards allow multiple bus speeds because external clock generators are programmable via the BIOS. 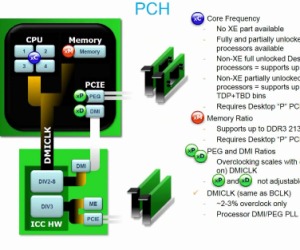 The report continues with more technical information and analysis. This fundamental design change will impact casual overclockers all the way to highly-regarded extreme benchmarkers. Don’t panic and switch to AMD just yet, motherboard manufacturers are looking for ways to circumvent the locked frequency. As Bit-Tech points out, locking the frequencies will essentially level the playing field among all motherboard manufacturers. By taking overclocking out of the equation, there is less reason to purchase a higher-end motherboard.

If the past is any indication, this may not be as much of an issue as anticipated. Intel was expected to carry out a similar plan to limit overclocking before the release of the Nehalems core.

Worst case scenario, Intel will still manufacture the unlocked K-series chips. End-users will pay a premium for those CPUs, but their overclocking potential will probably make up for the extra cost.

Will AMD reclaim the overclocking crown? Will motherboard manufacturers discover a workaround? All this remains to be seen. Stay tuned.