Sandy Bridge E will be arrive in Q4 2011 according to a leaked Intel roadmap. The slide below, posted by Xfastest.com, includes products through the first half of 2012.

Here is a quick breakdown of Sandy Bridge E specifications based on the leaked slides: 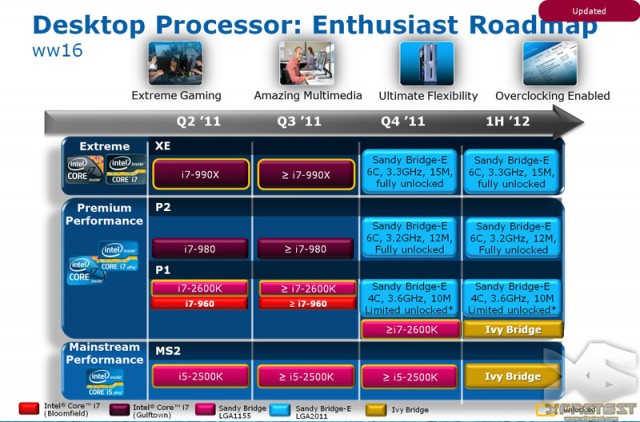 This slide confirms some of the information we reported several weeks ago, namely the number of cores and larger cache size. Just to recap, the X79 will feature:

With 32 PCI Express lanes (dual 16x or quad 8x) and 14 SATA ports (Ten native SATA 6Gbps ports), this platform should be able to handle just about everything you throw at it. One glaring omission is USB 3.0, which will likely be included via an external controller.

These CPUs should easily outperform anything currently on the market, but how do they overclock? It looks as though the top tier processors will be fully unlocked, ensuring that some overclocking will be possible.

The lowest Sandy Bridge-E will be “limited unlocked”, which could mean all the lower multipliers are unlocked, multipliers up to a certain number are unlocked or anything else imaginable. Hopefully more details will surface in the near future sinc the P1 codenamed CPU will be the cheapest of the lot. This will likely be the most appealing to overclockers assuming it is priced at about $315 like the i7-2600k.