Editor’s Note: Forum member The_Coolest has announced the release of Core Temp 1.0 RC2, just a few weeks after the Core Temp 1.0 RC1 release. Core Temp RC2 includes many improvements listed in the development change log, and it also has an important bug fix that improves the accuracy of Sandybridge temps. Most exciting however, he’s also launched Core Temp Monitor. It is a simple Android app which supports Android 2.1 and up, coming in a free or a paid version if you’d like to support further development.

Core Temp Monitor allows you to keep an eye on any the systems running Core Temp right from your Android phone or tablet, be it over WiFi or 3G/4G.

After updating to Core Temp 1.0 and installing the CoreTempRemoteServer plugin, you will need to make the necessary configurations to the server and your router/firewall. If you need help there, start a new thread in the Overclockers Cooling subforum and other users of the app will be happy to point you in the right direction.

When this is done, all you need to do is open Core Temp Monitor on your phone or tablet, press on Menu and add a new monitor with the proper configuration. 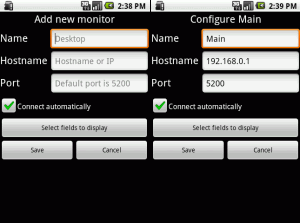 You can tap on a monitor to either expand or collapse it. 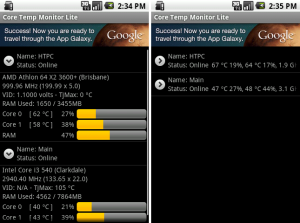 If you tap and hold on a monitor, you get some extra options. 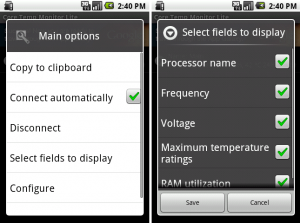 The app is available in two versions, a free “Lite” version and a standard paid version. The free version is limited to monitoring up to two computers and it displays an ad at the top.

This app originally started as a college project, but I saw that it has some potential and can be really useful to others, especially those running [email protected] and other DC farms.

I know that there are plenty of people who would also love to have this working with their Linux based systems. I think it’s doable and shouldn’t be that difficult, as Linux has lm-sensors and pretty much all of the information Core Temp provides can be retrieved quite easily. I would really like to work with a Linux developer to create a similar “server” side for Linux OS, so if anyone has experience with Linux programming feel free to drop me a line and we’ll talk.

– Arthur Liberman (aka The Coolest)

Downloading and installing now! Will report back once I got it going.

In the install, there is a prompt to install the yahoo toolbar, so you may want to watch for that and decline if you don't want it!

By the way, you can also join the developer's livechat here if you have questions or problems:
http://www.alcpu.com/CoreTemp/livechat.html

Once I get my Samsung Galaxy SII this week (:drool:) I'll give this a whirl :)

Thanks for the software but don't think I'll be using it as it is heavily bloated.
Other things and Yahoo toolbar was unchecked but it installed anyway.

Ya Sam, unfortunately thats apparently a bug with the InstallIQ system - personally I think Arthur should consider alternative installer solutions. No one likes foisted spyware, and its not a problem with his app exactly, but the installer system he's using - easy to replace, probably best to just replace it at least until they fix their garbage installer. :shrug: Most users, like you, don't care if its the app or the installer - they'll blame CoreTemp as the blame ultimately falls on the app developer.

You weren't the first to bring it up either, Muddocktor mentioned the same problem a few weeks ago: http://www.overclockers.com/forums/showpost.php?p=6939827&postcount=12

You need to click "More Downloads" then on the standalone downloads. This avoids the ****ty InstallIQ software.

When you run the installer, you have to click "Decline" on the toolbar offer, and it will only install Core Temp.

Replacing the installer is not possible. This company works directly with Yahoo and other advertisers, and Yahoo referred them to me after I tried contacting Yahoo, Google, Microsoft.
These guys require much higher downloads per month than what I currently have to sign a contract with, so I didn't have much of a choice.
It is also the only kind of installer that this company does, and unfortunately I don't have a way around it.

Besides the crappy installer the android app and the remote plugin are very simple to install and it works flawlessly. With 2 monitors running it was about as close to realtime as you can get over 3g.

Admittedly lots of things I don't know about installer limitations or features. But open sauce and used by various popular packages:
http://nsis.sourceforge.net/Main_Page

Not trying to sweat you Coolest, really trying to help. Also has monetization options:
http://www.installmonetizer.com/Publisher_download.php?name=NSIS&path=pdf/IMGuide.pdf&type=pdf

Here's a beta version of a Linux based server, which uses lm-sensors.
Currently 'k10temp' driver support is experimental but 'coretemp' and 'k8temp' seem to work.
Download

Requirements:
1. Mono with 'corelib2.0' and 'winforms2.0' if you want to use the WindowGui.
2. lm-sensors.
3. Intel: 'coretemp' driver for temperatures.
AMD: 'k8temp' for any pre-Phenom gen CPU and 'k10temp' for Phenom gen and later. (k10temp support is still experimental)
VIA: 'via-cputemp' driver for temperatures.
4. Android based device with Core Temp Monitor (Lite).
5. Network (for LAN) or Internet connection.

Configuration:
For WindowGui go to the "Settings" tab.
For ConsoleGui press 'c' then Enter for configuration screen.
You need to type in the name of the sensor you would like to use for VCore/VID. (run the ConsoleGui version from the terminal for a list of all sensors with names)
For TjMax sensor name, default is 'crit', as seen when you run 'sensors' command from the terminal and look at the 'coretemp' driver output.
Then you can adjust the update interval and the port the machine is going to be listening on.