First, let me thank Mr VW, Wedesco, LiQiCE and Lotsamula over at Anandtech Forums for the work needed to make this work.

If you got an Iomega drive and wish to turn it into a Plextor, go here.

You can now not only use Plextor firmware, you can change the name of the drive so it tells the world (and programs) that it is now a Plextor. (But before you do it, please read and accept the disclaimers stated at the aforementioned website.)

I’m writing this article because I ran into a problem some of you might, and suggest a fix to your problems.

I Couldn’t Do It Via Via

The firmware simply would not update no matter what I did on the Athlon system, Win98 or Win2k.

I very, very strongly suspect the reason for this are the Via ATA100 drivers being used in the MSI K7TPro 2A. My machine kept going to a different location than was indicated at the websites to update the firmware.

So what I did was put the drive into a machine that did not use those drivers (an Intel 815). Clicked the update program, bang, I had Plextor 1.07 firmware installed. Used the “change of identity” program to tell the burner it was a Plextor now, bang, it worked after a cold boot.

Put the burner back in the regular machine, no problem.

This is now what I get from what was an Iomega machine with 1.03 firmware a few days ago. 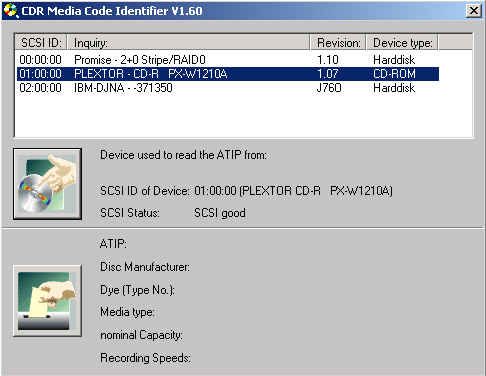 (In Win2K, the Via ATA100 drivers call all the IDE devices SCSI, even regular old hard drives.)

So What Should You Do?

If you are using the Via ATA100 drivers, and cannot get the firmware to update, you should either attempt the updates on a machine that doesn’t (much preferred), or (and this hasn’t been verified yet) use alternative ATA drivers to attempt the update.

If you’re scratching your head and saying, “But I used the Via ATA100 drivers and I had no problems updating,” tell me. Maybe it’s just another quirk
of the MSI K7TPro2A (which actually has been very well-behaved since I stopped making changes). If you aren’t using the Via ATA100 drivers, but are having the same problems with other Via boards (Athlon or otherwise), tell me, too.

Computing Event of the Year The Year of Cant and Can’t: If geeks had a Chinese-like calendar, 2005 would be called the Year of the Delay. Almost nothing came out on time and/or as expected. From Intel essentially taking the

Quite a while back, I spoke about the emergence of geek gangs. At that time, I made this comment: If you establish the concept of gangs in cyberspace, eventually, you’re bound to get some gangs with more discipline and less