Iwill was nice enough to send us a sample of their new SIDE RAID 100 card to try out. This card accommodates ATA100 drives and is backward compatible to other formats, so if you don’t have 100s now, you can “grow” into it.

RAID is now becoming much more popular as new motherboards build it in. The legitimate question to ask is “Do I need it?”. Here’s my take on it:

In addition, let’s say you have something like a SOYO 6BA+IV or ABIT BX6-2; these are great boards that continue to deliver top BX performance today (I have each one). You can extend the life of older boards by using a RAID card to bring drive performance up to snuff, even if you don’t use RAID features. Take my word for it – you will feel the performance difference.

OK – so how does this card stack up? The card itself looks pretty spare – basically two chips, two connectors, 5 capacitors and that’s it: 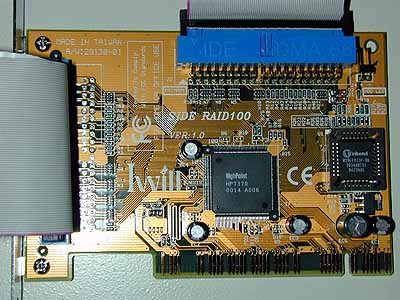 It says “ATA66” on the connector but it’s a RAID 100 card.
INSTALLING RAID

The one pain in setting up RAID STRIPING is that you have to reinstall the OS – not so with MIRRORING. You have to do this because when you set up a STRIPE, two drives act as one; when you PARTITION and FORMAT the STRIPED drives, the OS looks at them as one drive. Everything written to the two drives are now spread across both. The drawback is that if one drive fails, everything fails. You can STRIPE+MIRROR, but you need four drives to do this.

Anyhow, I thought “Why not use GHOST?” Should work – right? Well, it can be done for W98, but it’s not exactly straight forward. In fact, I would be hard pressed to tell you exactly how I did it! I will do it again and take scrupulous notes, but one thing you CAN NOT do is use the ATA 100 slots on the motherboard – they are read as SCSI devices as is the Iwill card.

Two SCSI devices just don’t like each other, so I used the IDE slot for the single drive and ghosted to the RAID card. It took a number of boots into W98, but finally it took.

Bottom line: Expect to do a reinstall.

For this test, I used the ASUS A7V with a DURON 650 running at 935 (8.5×110); I must say that we banged on this combo for two days without a hiccup. I used the new Leadtek GeForce 2MX (courtesy of NATA Computers) with two sets of drives – IBM 7200 rpm ATA100s and Western Digital 5400 rpm ATA 66s – I wanted to see how much of a difference ATA100 would make. I also ran benches for a single IBM ATA100 drive to see how much of a performance difference RAID STRIPING makes:

Anyone in the business of video or sound editing should invest in a RAID solution – it will make a difference. The Iwill SIDE RAID 100 is a good solution. If you need to just MIRROR drives for safety, almost any RAID card will do, although a RAID 100 will be faster overall.

For absolute top drive performance, RAID STRIPING with W2000 is a no-brainer. But if gaming is your thing, until we get solid W2000 drivers, stick to W98.

Thanks again to Iwill for sending this sample our way.

Ring Out The Old Or Ring In the New?

For those who were looking for a component-laden Christmas, things aren’t looking too hot. On the Intel side, it’s coal for Christmas, but given that it’s been The Year of Coal over there, that’s hardly surprising. That leaves AMD, and

What I Want For Christmas

First thing I have to do is move Christmas. Santa can’t deliver what I want by December, besides, you always get better deals off-season. 🙂 So let’s move Christmas to sometime next summer. That’s enough rest for Santa. What do

The Court Decided, Not the Media You can’t report court cases like sports scores, especially cases like this one. The decision is 125 pages long. You can’t read, much less comprehend, something like that in three minutes or less, but