SUMMARY: The worst thing about this board is its name; aside from that, Iwill ranks right up there with the ASUS P3V4X and SOYO 6VCA.

Iwill was kind enough to send a sample of their VD133 Pro motherboard; this is a VIA 133A 694X/686A chipset with built-in Iwill RAID. I am going to do this review in two parts; Part I will look at the board without RAID enabled, and PART II with.

The VD133 Pro is a socket 370 board supporting CuMine, Celeron and Cyrix chips. The board uses the ICS 9248-98 PLL chip, the same as the SOYO 6VCA, although the FSBs are slightly different:

What I found odd was that the chip supports 142, 146 and 148 FSBs but they are not in BIOS; I am checking with Iwill as to why these are not enabled.

In addition, there are jumpers to adjust Vcore by 5% or 10% and VIO to 3.4, 3.6 or 3.8 volts. These jumpers are located close by the DIMM slots at the top of the board (circled in red, pic below). There are no settings in BIOS.

Jumpers are circled in red

This board supports 8 drives – two drive sockets are located on the extreme right side and two where you would expect to see a PCI or ISA slot. Due to this location, there are only 5 PCI slots and AGP and AMR slots. The drive slots are all ATA66 compatible driven by an HPT 368 chip (pic below). There is a jumper next to the right side of the fourth PCI slot which disables RAID, although why you would do that is beyond me. 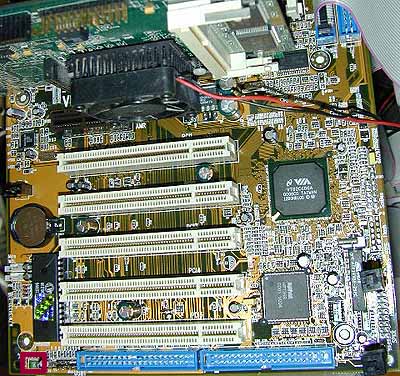 At the extreme left hand bottom corner, the red box shows the green LED which indicates Power On; the video card is a Matrox G200 which I used to load W98SE, then switched to the LeadTek GeForce 2 GTS*.

One thing I liked about this board is the amount of real estate above the AGP slot – lots of room to dabble in CPU or video card cooling schemes (pic below). Note that there is no “greenie” on the 684X chip; however, there are holes in the board to mount one should you choose. I felt the chip and it does not get too warm, but it can’t hurt to add cooling to it. 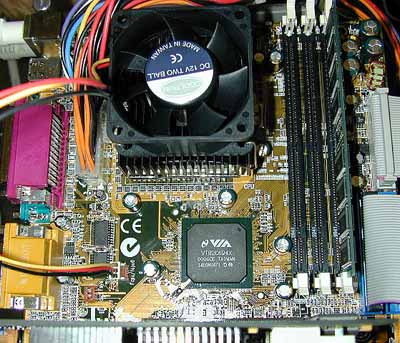 Iwill released a new BIOS (Award) and I tested the board with it. I am using a PIII 600E at 133 MHz with 128 MB HSDRAM (7ns) and the LeadTek GeForce 2 GTS, W98SE fresh install. My first task was to find out how the Iwill handles memory bandwidth. Running the board with SDRAM set to Turbo at 800 MHz gave me the following SiSandra results:

Kind of puny. So I loaded Oda’s WPCREDIT and found that, surprise, 4-way interleave was NOT enabled. I enabled it with the following results:

Look at those numbers closely. Using the same CPU and RAM on the ASUS and SOYO, the Iwill bests the ASUS by 4.5%/1.8% and the SOYO by 6.5%/2.5%. This is BX performance; I don’t know how Iwill tweaked the board compared to the others, but they must be doing something right. I hope Iwill will release a BIOS with 4-way interleaving; I don’t see how they could not.

Let’s push it a little and see how it reacts. The following table shows results for SiSandra 2000 and 3DMark 2000 Pro benchmarks at 133 MHz and 140 MHz (800 and 844). The board will post at 144 MHz into Windows but can run Prime95 only for about 5 minutes before failing – not crashing, but failing Prime95. This is at 1.82 volts. Perhaps with some better cooling, stable higher FSBs might be possible (water block is next).

Nothing shabby here! The LeadTek GeForce 2 GTS is one sweet-running card; during the 3DMark benches, some scenes ran at almost 300 fps. I had no stability issues at 140 MHz with Prime95 or 3DMark.

So far, so good. The benchmarks are quite good; I am anxious to see what other reviewers come up with in comparison to other highly rated boards. I think we can conclude that the Iwill, without RAID, turns in some impressive numbers. The next task is to see how it handles RAID.

The key question: Is the total package worth it? Stay tuned.

Thanks again to Iwill for sending us this board to test.

*Maybe you do this, but I found the easiest way to install a new card is to load the drivers first; then switch the cards. When Windows finds the new card and asks for a location for the new drivers, hit “Skip File” and it loads them no sweat.

For whatever reason, the Iwill VD133 PRO packed it in after 3 days of testing – probably a blown power transistor. This turned out to be fortunate: Iwill sent a replacement board – Version 1.2. The first board I had was Version 1.1.

I’ll continue testing with striped drives, but so far for all-around performance, the Iwill VD133 PRO with RAID is going to be hard to beat.

In continuing to test out the Iwill VD133 Pro, I ran benchmarks to compare performance with and without RAID enabled. Enabling RAID on this board is very easy; there is a RAID setup which can be accessed during boot-up by hitting Control H. This puts you into the on-board RAID BIOS.

However, you can not simply enable Striping – you must do a fresh install, including FDISK and FORMAT. This is because Windows recognizes the drive as one large one, not two separate. In this case using Western Digital 8.4Gs, it was recognized as one 16G drive.

With the exception of Quake, other benchmarks are relatively the same.

I also decided to see how much of a difference a PIII 600E would make compared to the CeleMine 533A:

Note the high Burst rate with the 533A with 4-way memory enabled, but at the expense of CPU Utilization – a whopping 37.8%. Looks like the cache-challenged CeleMine has to work pretty hard in this instance; under this scenario, the CPU hit may negate any drive advantage.

Mirroring is the least impact on performance – sort of what you would expect. I use mirroring on my “main” machine and have not noticed any performance hit.

Striping is another story, although it looks like the hit is selective. I would have expected some difference as there must be “arbitration” between the two drives to sequence data flows, so it is not unreasonable to see some degradation. I was surprised to see it was not an across-the-board hit, but selective.

I also noticed that with striping I could not consistently load files into WPCREDIT – it would freeze, although I could alter the chipset without any problems using the program each time. Odd.

Overall, it comes down to a question of what you’re looking for:

The Iwill Pro is starting to hit the “Review Trail” and is besting the ASUS P3V4X, as we demonstrated in our earlier reviews – nice to see we did not have an aberration. We received the Iwill Pro Lite and tested it to compare against its more expensive brother.

This is not a trivial difference – the Pro outperforms the Lite by 15.3%/15.0%; The ASUS P3V4X out-performs the Pro Lite by 12.3%/12.0% but just on this one benchmark; on all others it performs as the Pro did, so with this one exception, the Iwill Pro Lite bests the ASUS P3V4X.

Unfortunately I do not have the PIII 600E I used in the earlier tests and the one I used here could not make 140 FSB reliably, so I have no benchmarks at that speed. However, SiSoft Sandra memory marks at 140 FSB were 421/474, about 10 points higher than the Pro (although the difference here is not significant).

Just some quick pics to show the physical differences. The most noticeable, of course, are the missing RAID slots and HPT chip. 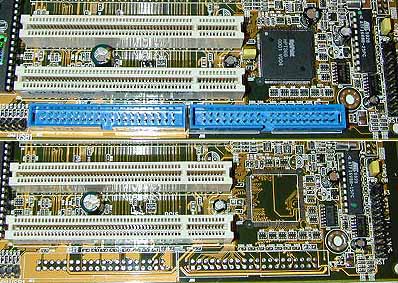 Now you see it, now you don’t.

In addition, there is a minor change on the upper left hand side of the board – this amounts to a re-positioning although one capacitor is smaller on the Pro Lite. 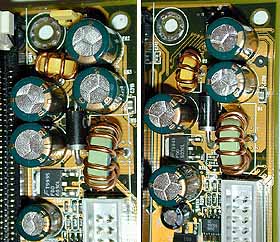 Can you spot the change?.

There is a sticker on the board labeled “VD133PL”; if you peel it off, the silk screen on the board reads “VD 133 PRO”. I would guess this is pretty convincing evidence that in fact the board is the same less the RAID slots.

I measured the temp on the PLL and 694X chips while benchmarking; the PLL chip got up to 41 C and the 694X to 38 C. I think it might help to put heatsinks on both chips. Location has a lot to do with these temps – air from the heatsink fan moves cooler air over both chips. If you use water cooling on this (or any other) board, active cooling of at least the AGP chipset is highly recommended.

The Iwill Pro Lite under-performs in Quake but otherwise bests the ASUS in the same manner as the PRO. Whether future BIOS revisions can close the gap is pure conjecture.

Overall, the Iwill Pro Lite tips the scales in its favor as an all-around better choice.

PS: Also note that this board uses a thermistor in the socket, as shown below: 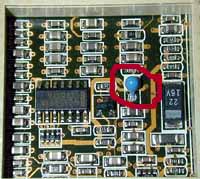 Thermistor in the socket.

There is a major flaw with the ABIT KT7 and KT7 raid boards for anyone considering Digital Video Editing. After 3 weeks of my own tweaking and testing and hours of long distance calling to tech support for Abit and

Somewhat radical mod, not for the faint of heart – Joe