SUMMARY: A hybrid heatsink – copper bottom, aluminum top – that performs very well with the Delta 38, unacceptable with the stock fan.

I received this heatsink from Jamitech Corp to test out – it’s marketed as the Speeze 5E34B3. It’s an aluminum extrusion unit with a copper base. The clip is an absolute bear to get on – a screwdriver is a must. 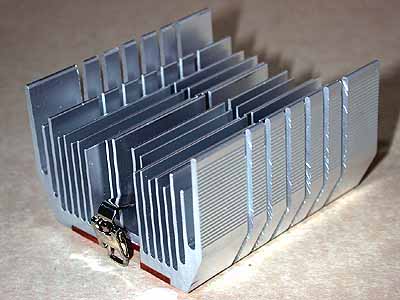 The copper base is a bolt-on – 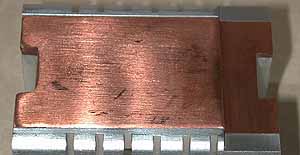 there are two screws that appear to affix it to the aluminum body.

The fan is pretty anemic – real quiet (54 dBA measured 8″ from the fan’s intake); it’s unmarked. The fan spins at about 4200 rpm, and from their website, it looks like it’s probably a 20 cfm unit – not going to cut it for serious cooling and a typical “OEM” fan.

I prepared the Speeze by boring a hole completely through its base so I could epoxy a thermocouple above the CPU. The thermocouple is attached to an Omega HH23 Digital Thermometer. Ambient temps were measured with a thermocouple placed about 1 inch from the fan’s intake.

I first tested on a simulator (50.1 watts) with both the stock and Delta 38 fans; based on these results, I decided not to use the stock fan for motherboard testing. For motherboard testing, I used Prime 95 to stress the CPU on an Iwill KK266, running a T-Bird 1133 @ 1330 (82.7 watts). Arctic Silver grease was used in all tests.

Surprisingly, the Delta 38 propels the Speeze into very competitive territory, although at the usual expense of unacceptable noise levels. Increasingly, it looks like the bar is being lowered to around 0.25 C.W and lower as the “performance heatsink” threshold.

Even so, understand what you can expect with a 0.25 heatsink:

For a CPU radiating 75 watts, this means the 0.25 heatsink will hold CPU temps to an increase of about 19 C; if your system temp is 35 C, you will see CPU temps of 54 C. If you want temps around ambient, you have to move to watercooling or, alternatively, aircooled peltier solutions; IMHO, the former is a better approach than the latter.