Like most overclockers, I began at a very wee age (at least 6 months ago) when I bought my first Athlon. Once I had assembled my Athlon 700 with an K7V mobo, I was shocked at the 94F temperature on the motherboard. I immediately began looking for solutions, from card coolers to bay coolers, until I created an atrocity that could easily have convicted me of first degree eye-slaughter. And even after 7 fans, the temperature had not improved at all. 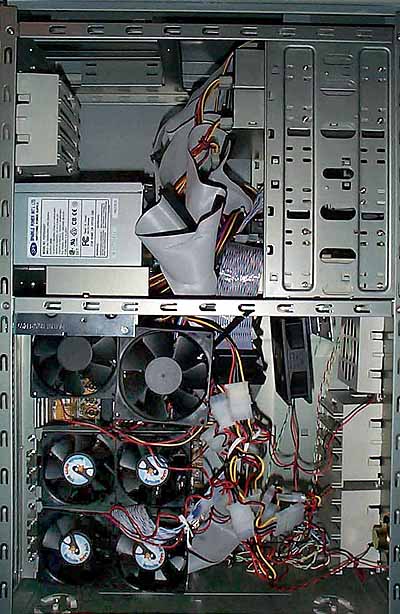 The case BEFORE improvements.

After throwing a tantrum, I began scouring sites to find out more information. I finally began to realize that the problem was not the amount of fans, but the airflow.

I was then introduced to blowholes on the Overclockers.com forum. This seemed like the way to go for me.

I then began researching the Biggest Fans I could put in my beast and found by salvation at 120 x 120 x 38mm fans. These were the little darlings I had been craving. I went to 3dcool and bought 7 of them. Yes, yes, I know: Overkill. Just remember, you’re reading about a guy whose grand-daddy used a small electric engine and airplane propeller as a household fan with no grill and 2 small children. 🙂

Now, I knew noise was going to be a factor – especially after hearing the word crazy being repeated over and over again by the 3dcool.com guys when I made my phone purchase – but I didn’t listen.

By now, I sold my Athlon and replaced it with a PIII 933 on a Cusl2 and a Golden ORB.

My case remained the same, however; the lovely and gracious Supermicro 750a. I grabbed my jigsaw and went to work. I drilled 7 120mm holes to make room; 4 over the motherboard and processor for intake and 3 up top – 1 on each side and one on top, all directly above the Power Supply.

How I mounted these fans is the key to everything. As we all know, vibration gets a whole lot worse the higher the fan’s rpm, so I hung them. 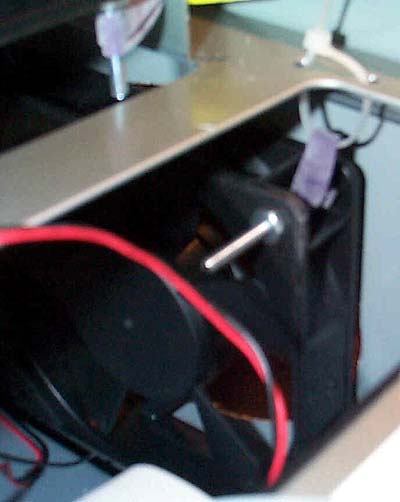 That’s right, I hung them inside my case using Inner tube Bike Tire Rubber. The reason for this particular rubber I used is because #1, its 100% Laytex and #2, it was only 5 bucks :). I cut each into half inch thick rings which I threaded though between the two screw holes, threaded the rubber rig through the middle, and locked on the other side with locking washers. Once secure, I took cable ties and took advantage of the precut holes in My Supermicro case by threading the cable tie through the hole and through the rubber loop and let it hang. The cable ties allowed me to adjust the position of each fan. 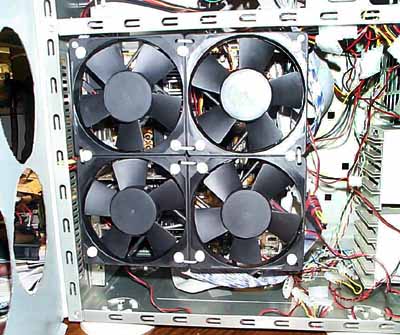 For the 4 fans on the bottom, I tied them all together using cable ties to further reduce the vibration they might produce making one giant fan of the four.

The result was 7 hanging beauties dangling in the air. I also kept the 92 mm provided by Supermicro over the power supply up top exiting the back and added one more 92mm fan next to the CPU, blowing out from the side.

For my Quantum 10KII 70GB beast, I mounted him in the last 5 1/4 bay in the he front of the case and mounted a Just Cooler Twin Turbo directly above it.

The noise was still very loud, although greatly reduced because of my design, but it was still too loud for me. I added 2 stainless steel enclosures 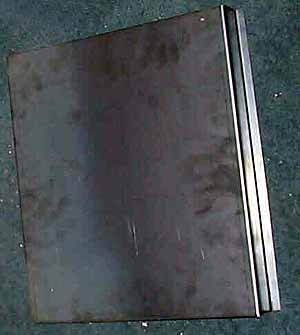 lined with a substance made out of the inner tree bark (yes, I hate nature) that is a natural noise reducer. The enclosures open from the front because the fans are in the back of the case. 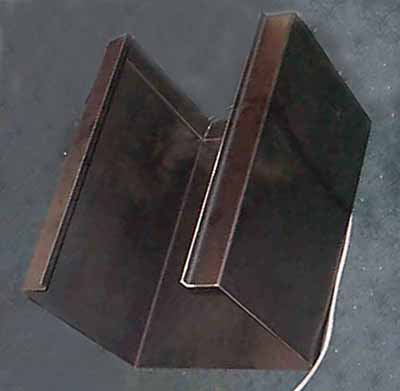 Each fan has at least 2 inches of headroom around it from the enclosures to grab all the air they want (or to blow out).

The 120s each blow 131 cfm each, the 92s 50 cfm each, the Golden ORB 20 cfm, and the just cooler Twin Turbo, 80cfm. That’s 1,117 cfm running through one case. Crazy? You bet your sweet ass it is but with the mountings and enclosures, the small amount of noise surprises a lot of people. 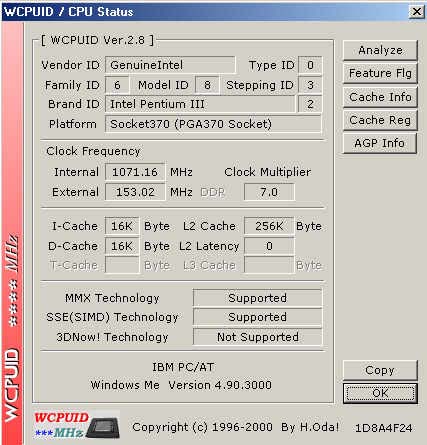 Overclocking now is not a problem. I can get to 1050 MHz easy and on a good day, if I sacrifice enough Duron chips to the Intel gods, I can hit 1071 MHz stable.

The 45 lb weight shown below is only there to show how strong I made these enclosures. 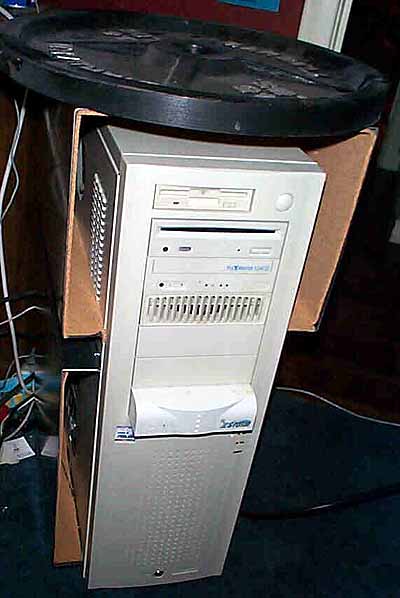 Now, you may be thinking, “Fans? …What’s so interesting about fans?” Or you may not even be that fussed, just a tad curious. Whatever guys, fans are incredibly versatile. Hopefully this review will show a bit about how diverse the fan market is and what’s on offer for people.

I use a similar method to adhere a cpu to a waterblock/heatsink that is not permanent. I apply thermal compound as normal and a small amount of Type 150 silicon on each corner of the cpu. The cpu is placed