Having done significant DDR memory and AMD A64 CPU testing on AMD setups, I was wondering how that experience would relate to my new Core 2 Duo E6600 setup. What would be the dominate overclocking factors? To see I ran a series of tests using SuperPi (1M digits) as a performance metric.


In the past, memory speed and timings have played a reasonable part in performance. To reach maximum performance, you would overclock both the memory and CPU. With 32-bit processors such as the AMD XP, DDR memory performance and settings had a more significant effect (5-6% max) than with the 64-bit CPUs that followed (2-3% max). How would the C2D with DDR2 perform and if different would the approach to overclocking change?


Several tests were run. In general, the results reported are the average of 5 tests. Exceptions to that are noted as appropriate. Tests included the following:


You do get better performance with higher CPU speed, see Figure 1 – no surprise here of course. Memory speed and timings are held constant in Figure 1. You can also observe that there is minimal effect of the FSB speed when the CPU and memory speeds are fixed, ie running the Northbridge faster alone doesn’t provide any advantage except at lower FSB speeds. 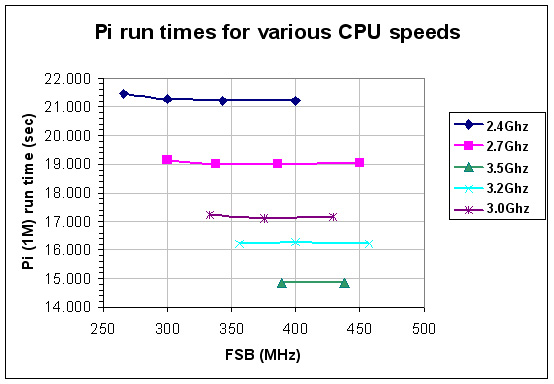 
Figure 2 shows the gains of higher memory speed at a three different CPU speeds that were 3.5 GHz, 3.0 GHz and 2.4 GHz. Memory timings are held constant in these studies. As you can see, higher memory speed does improve performance. But the difference between memory at 800 and 1000 is minimal, on the order of 1.5% or less (see details below). 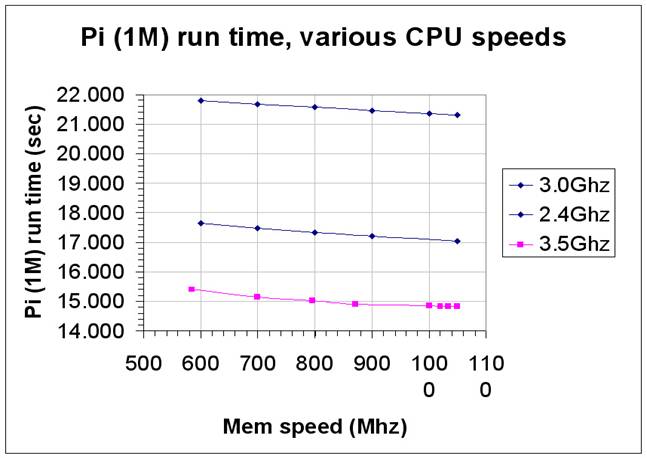 
Next, info/data on the effects of memory timings is given HERE. An interesting detective story is associated with the initial part of investigation. The table shows results using my Mushkin that is rated at 4-5-4-11. Two sets of tests associated with memory timings are shown. One test ran Pi using 1M digits with 5 samples and the other 2M digits with 10 samples. The 1M case is often used as a reference test by a number of folks including myself.

To make a long story short, the results using 1M digits and 5 samples do not produce results that we would expect. For example, 5-5-5-12 is faster than 4-4-4-11, very questionable result. However if you look at the standard deviations of the tests (called sigma in table), you see that the variability (as represented by sigma) indicates that while the results aren’t what we expect, it is a reasonable result (If you have a collection of data from a Normal Distribution then approximately 66% of the data should fall within one standard deviation of the mean).

Thus 66% of the average values would lie between 14.7689 (average – sigma) and 14.8835 (average + sigma) if I had an infinite number of tests. My result for 5-5-5-12 lies within that spread, so I can’t say it is wrong. Thus my metric as applied to this question doesn’t appear to be good enough! You must always make sure your measurement reflects what you think it does.

From this point, I conclude I required a better metric to measure the effect of memory timings. For this reason, I conducted the Pi test set with 2M digits and 10 samples. It took half a day testing to run those cases in combo with a few “honey-do”s too. Looking at those results in the table, they are more typical of what we expect – ie the ordering of what is important is typical for the various settings.

Results (Bang for the Buck Results)


A little more comparative info is shown in Figures 3 and 4.

Figure 3 shows performance as a function of CPU speed for two cases, memory run at ~1066 and ~600, which are the extreme memory speeds I’ve tested. As you can see, at 3 GHz the performance difference due memory speed is ~3.7%, which would require an additional overclock of 100 MHz for the 600 memory to be equivalent. Depending of the cost difference between 600 and 1066, you would have to decide if the performance payback value is worth the extra cost for you. 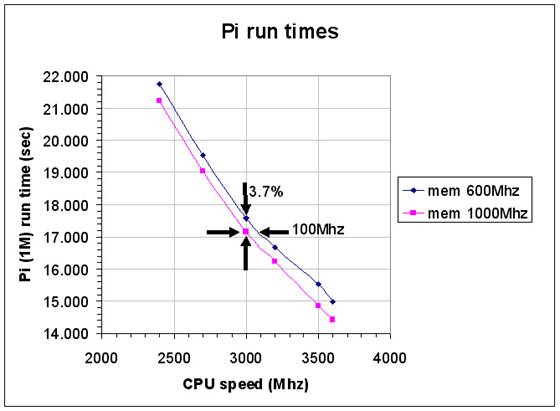 Figure 4 shows in greater detail part of a previous plot. From this plot you can observe that if you bought 800 memory, you would get 2/3 of the potential gain between 600 and 1066. Thus 800 might be a good option for you if the price difference for the 1000 speed is too high. 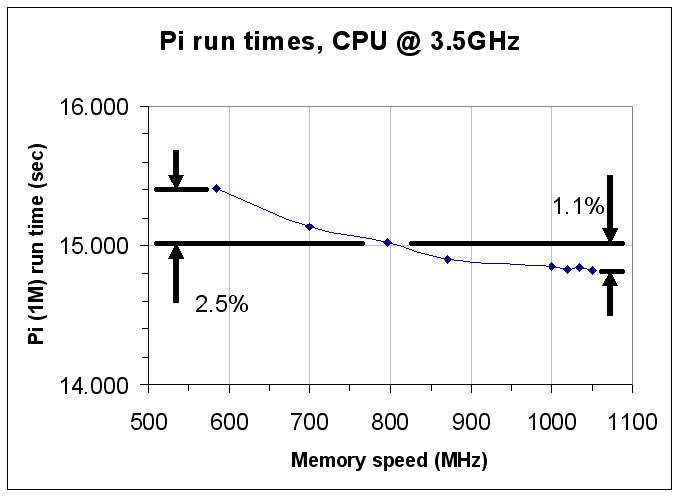 Looking at the table noted above, you can see that buying memory with 4-4-4-N timings would give you a gain of ~0.5% in performance over memory with 5-5-5-N timings. Again, you need to decide value.


From these studies , I conclude:


From my previous experiences with DDR to my current experience with DDR2, I find the newer memory combined with the newer CPUs and motherboards to be much easier to overclock. Basically with my current setup using DDR2, I can plug the memory into the motherboard, then go ahead and overclock the CPU while keeping the memory near its rated speed and timings.

The memory speed and timings can be further refined, but payback for your efforts are limited to a percent or two in performance – something you’ll never see in day-to-day work. You can also spend more money on faster-tighter memory, but above memory speeds of ~800Mhz the payback appears to be debatable (realize that I’ve not tested the super fast memory available today, but I see no reason to expect significant benefit with my current CPU and cooling).

Today, G.Skill announced the Trident Z5 RGB DDR5-6000 CL30 memory kits will be available in the second quarter of 2022. The kit will be sold as a 64GB set (32GBx2) and feature a low CAS latency of 30. G.Skill’s Trident Z line-up has been a staple in the overclocking and gaming community for years and the DDR5 variant is expected to continue this legacy. Pricing has not been announced as of this writing. For additional information please read G.Skill’s official press release below.

Manufacturers the world over are all gearing up for the launch of Intel’s upcoming Sandy Bridge – E platform based on the X79 chipset. G.Skill is ahead of the game and has already sent us one of their brand new quad-channel memory kits!

The premium DDR4 memory market just became a whole lot more interesting! A new kit of memory from Corsair has landed in our hands, and we are going to take a good look at this memory to see what makes it noteworthy. Corsair has added a new member to their flagship Dominator line. Today, we are looking at the Corsair Dominator Platinum RGB. This new Dominator module, which was first introduced back in 2010, has been redesigned from the ground up to achieve the highest Intel XMP standards for modern DDR4 memory.

Thanks to input from various members of the benching team, this article has had some corrections made to the HTML powering the page, and its now accessible in its entirety. Due to site upgrades in the past year, it was originally missing large portions of its contents. While its a bit of an old article its still a relevant topic, I've been going through updating some old articles to make sure they are available for all visitors, which as a side effect also creates discussion threads for old articles which previously didn't have comments enabled.

This article in particular has great testing, and some especially interesting supporting evidence. Though dated at this point, interesting stuff!

great work Matt! thanks for the fix :thup:

Study the past if you would define the future.

Awesome! Thanks for fixing it imog, i'm going to read through this in great detail.

I'd love to see a modernized version of the data collection, if anyone is up for running the tests. :)

This is stuff thats often discussed, but rarely supported with actual numbers implying exactly what sort of impact these settings have.

I'd love to see a modernized version of the data collection, if anyone is up for running the tests. :)

This is stuff thats often discussed, but rarely supported with actual numbers implying exactly what sort of impact these settings have.

I've been mostly folding over the last couple years but don't really have a farm to make much of an increase in score. Plus my interest lies in understanding of how things tick and tweaking to get the max. out of the hardware so I've joined the beaching team.

MIAHALLEN has built an excellent overclocking guide for the Intel CPUs so I see no need to reinvent that. I will start testing various setting and developing the results much as done in this original study. It'll take awhile to do the testing at a statistical level; I like to see "real" differences. Plus I'm sure there are a number of side roads that will be of interest.