First Look: If you like fans and LEDs, you’ll love this one. 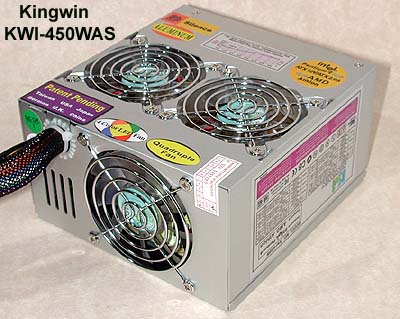 The good guys at Kingwin were nice enough to send us a sample of their latest power supply offering, the Kingwin 450 Watt Power Supply, model # KWI-450WAS, housed in an aluminum case. What’s notable about this unit is that it’s cooled by four fans, all of which can be varied from Full On, Low or Temperature Controlled. The noise difference is considerable – four fans blasting away creates a racket.

The four fans are located front, rear and two on the top: 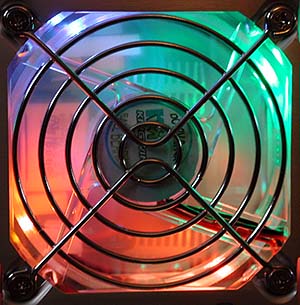 I guess four must be a theme here.

There is a three position switch located at the rear of the PS to control fan speeds. All four fans (double ball bearings) are speed controlled by this switch, which features settings for A Auto, T Turbo, and L Low.

The Turbo setting is all the fans full blast, Low sets the fans at one low speed, and Auto lets the temp controller do its thing. When first starting up, Turbo is the loudest by far, followed by Low with Auto the lowest – barely discernible from three feet away. Depending on how hot your case and the PS becomes (a function of the load), the Auto setting may or may not give the lowest noise.

Opening the PS (NOTE: VOIDS your warranty and dangerous!) 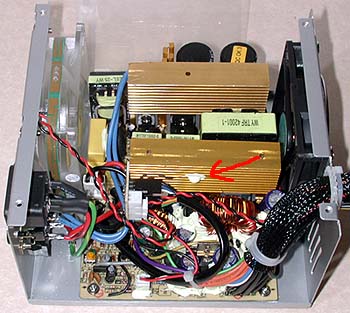 reveals two nice size heatsinks; the arrow points to the thermistor, which is glued to one of the heatsinks; it’s used to monitor temps and control fan speeds in Auto.

I measured fan noise with a Radio Shack sound meter three feet from the rear of the PS (free standing – not in a case); at Turbo it measured 57 dBA, at Low 51 dBA, and at Auto, the reading was less than 50 dBA – very quiet (Note: Room temp at startup was 18 C).

I can’t conceive of anyone buying this unit except to use it mostly in Auto (temp controlled) mode. The following graph shows fan rpms vs temps:

I think the effective range is most likely from about 20 C to 50 C. If the PS temp is passing 50 C, either it’s really under-powered relative to your PC or your case is on fire.

To check out fan speeds and temps, I tried the Kingwin on Auto with a Shuttle AK31. After running Prime 95 for about 30 minutes, it was still ticking away with low noise – exit air was 3.0 C over intake air (22.4 C in vs 25.4 C out). Switching to other speeds resulted in higher fan speeds:

Hmmm… not much relationship to the graph on the PS. Reading off the graph, fans at Auto should be spinning at about 1300 rpm – both the 70 and 80 mm fans were well beyond that – about 2100 rpm. The graph appears to be somewhat optimistic. I think the Turbo setting is a non-starter – very noisy.

Brett Wasserman is in the process of developing a Power Supply Test Bed, so detail testing (voltages, line noise, etc) will be posted soon.

My gut reaction is that adding a fourth fan is a bit of overkill, although I really like the way it opens up the PS interior to air flow. If I were to hack it, I think I’d add some resistors to the 70mm fans to slow them down to something like 1000 rpm and leave the two 80mms alone; this should move air over the heatsinks and keep noise even lower at Auto. I think a better approach manufacturers might consider is to use a quiet 120mm fan rather than two 70s.

Brett will do detail testing, but at first glance, Kingwin’s 450 Watt Power Supply KWI-450WAS looks like a good low-noise choice. Assuming you have adequate intake vents, a four fan PS might be an easy way to increase airflow for cooler interior temps.

To Hell With The Horse

Not Worth The Wait Any More If you buy the right TBird, you can get 1.4-1.5Ghz now. Given what AMD has said, Palomino is starting to look like something coming out around Labor Day (production 3Q ’00, and I’ve never

Some Considerations on Thermal Transfer: Variations on a Theme

Good mounting bracket design could prove to have a noticeable impact on thermal transfer. The conclusion of my previous article led me to consider some further considerations for heatsink and waterblock designers. A designer needs to consider two factors: First,

Some decades ago, some serious scientists “proved” that it was impossible for a bumblebee to fly. All that proved is that the scientists didn’t know everything that needed to be known. Pretty much the same sentiment ought to hit you