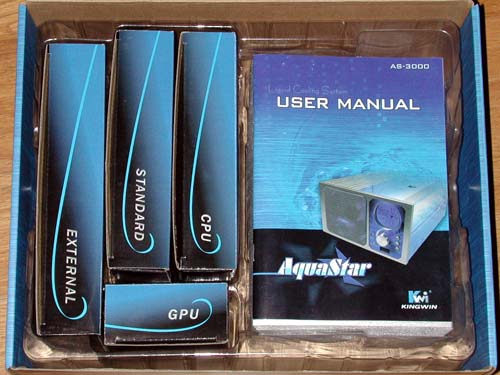 The good guys at Kingwin sent us the Kingwin AquaStar AS-3000
watercooling kit to try out. It ships in a box with parts for just about any CPU and GPU mounting option – internal or external configuration. In addition, this is the first kit I’ve seen that ships with a noise sensor.

The base unit is the size of two CD ROMs: 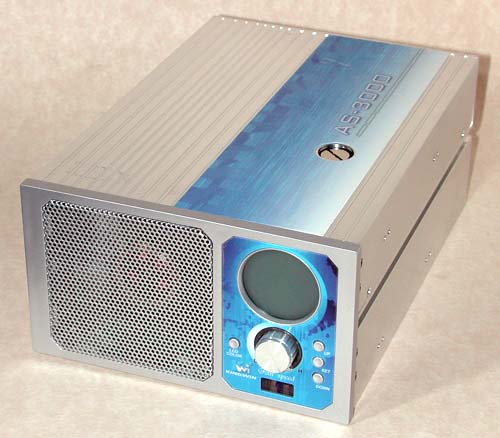 The display, when powered, shows all the critical data you’ll need: 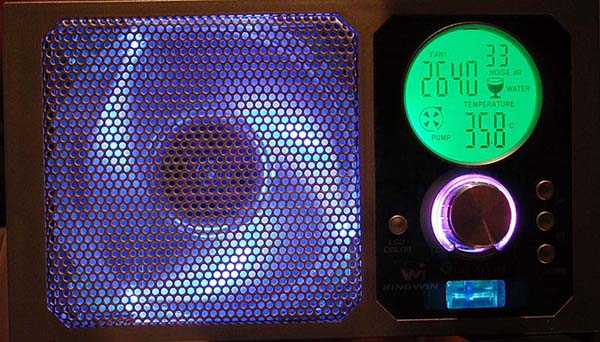 You can set 7 colors for the LED panel – red, green, dark blue, yellow, light blue, pink and purple; or you can leave it and it will automatically switch among the 7 colors. The waterflow monitor is at the lower right hand side of the case – I did find that at low fan speeds, it made a noticeable ticking noise; the LED behind it flashes all 7 colors.

The back shows the rear exhaust fan, connectors for the tubes and the connector for the multi-function power cable: 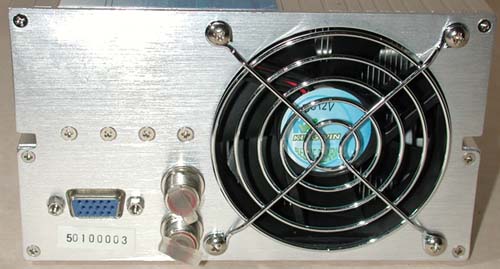 The top of the unit has the fill plug – unscrew and fill with the supplied fluid and distilled water: 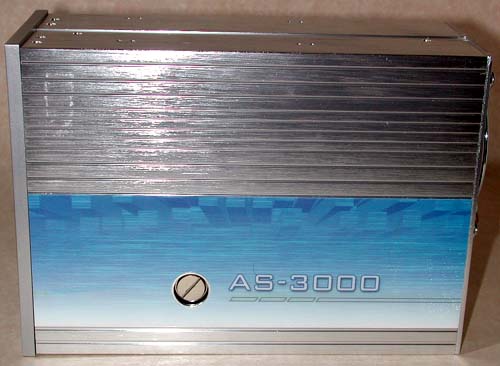 The CPU waterblock ships with mounts for about any CPU configuration: 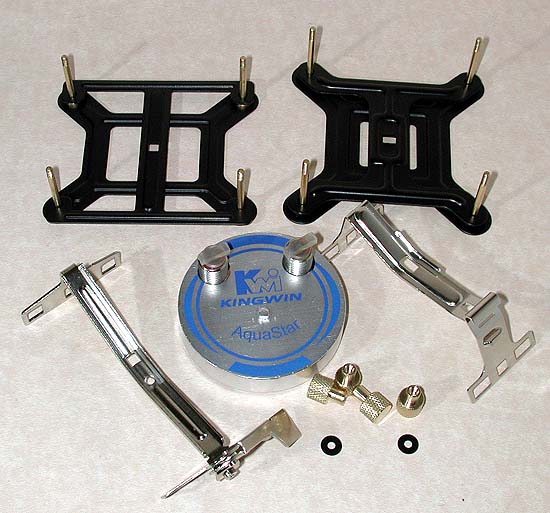 The base is polished – no apparent polishing or finishing marks: 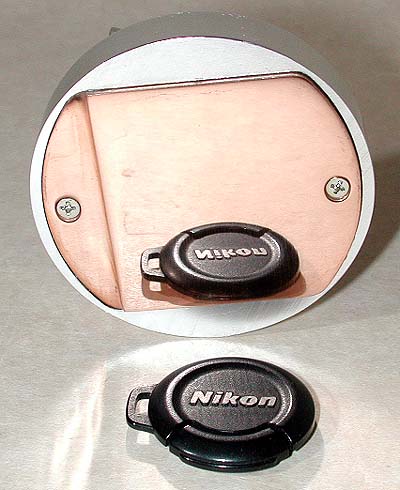 The GPU waterblock ships with multiple mounting options and a centering plug also: 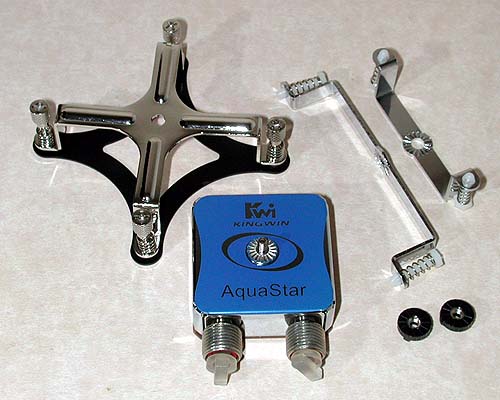 And similarly, the base is polished: 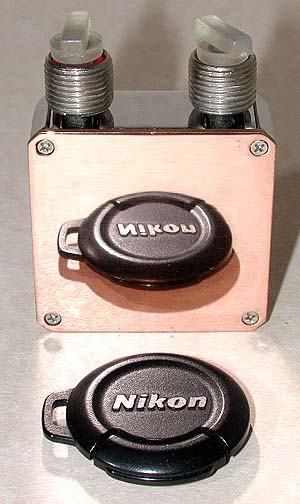 These are the parts for internal mounting: 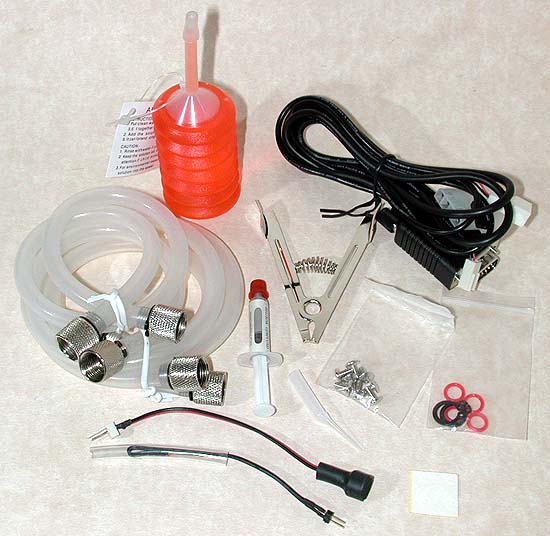 And these are the extra parts for external mounting: 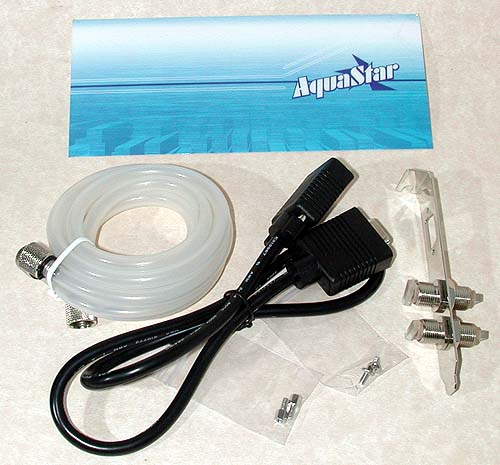 This is a VERY complete kit – there’s enough hardware included to meet just about every cooling option you might want to cover.
{mospagebreak}

KingWin’s AquaStar AS-3000 kit was tested using the CPU Die Simulator; I ran the fans at the lowest and highest settings to give a range of results.

¹Measured by thermistor taped to bottom of waterblock.

KingWin’s AquaStar AS-3000 kit ranks in the middle of all kits (Heatsink Ranking) tested to date with fans on high. The lower the noise, the lower the performance – no surprise here.

KingWin’s AquaStar AS-3000 is a good entry-level kit – its flexibility is very good and performance is good for a kit this size. The only negative I saw was that the mechanical waterflow monitor makes a ticking noise that’s apparent at low fan speeds.
{mospagebreak}

I decided to test the GPU waterblock that comes with the kit separately – I wanted to see what it could do by itself.

KingWin’s AquaStar AS-3000 GPU waterblock was tested using the CPU Die Simulator; I ran the fans at the lowest and highest settings to give a range of results.

¹Measured by thermistor taped to bottom of waterblock.

Not much different from the CPU cooler – only about 3-4ºC worse under the same conditions.

KingWin’s AquaStar AS-3000 GPU waterblock holds its own compared to the CPU waterblock – not substantially worse. For GPU cooling, it will do lots better than the stock coolers.
{mospagebreak}

I tested the KingWin’s GPU waterblock as a CPU waterblock to see how it performed – as it turned out, not too far off from the CPU waterblock (GPU Test Results). My ulterior motive was to try to adapt the GPU waterblock for laptop CPU cooling – its size looked just right for the tight confines of a laptop.

I scrounged around the odd-parts box but could not find a clamp that would fit Asus’s Z71A hole pattern – it measured 71 mm across, so I made a clamp using a piece of aluminum. The screws were way too short and luckily I found some I could use that came with an Asetek chipset clamp; it’s not the most elegant setup but will do for a test run (the problem is that the screws are very small metric, and they are a pain to find on short notice). 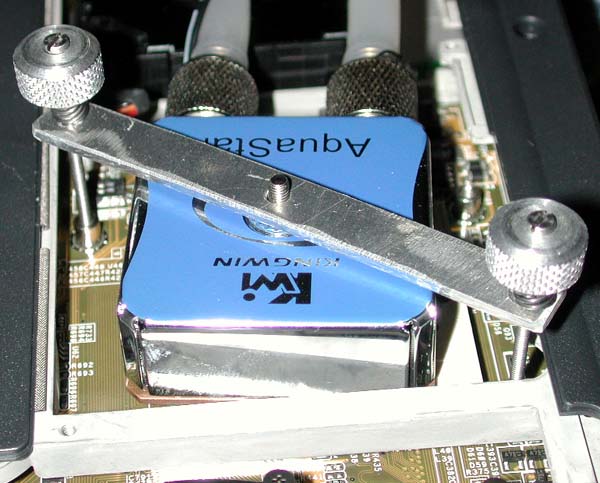 Since this was a “concept” test, I only secured the waterblock with two bolts – for a more permanent setup, I would use all four.

To test this setup, I ran Prime 95 with the waterblock in place and then again using the stock heatsink. Ambient temps averaged 26ºC; I ran the watercooling system with the fans on high. I left the CPU fan attached to avoid any problems with the system not sensing a CPU fan. 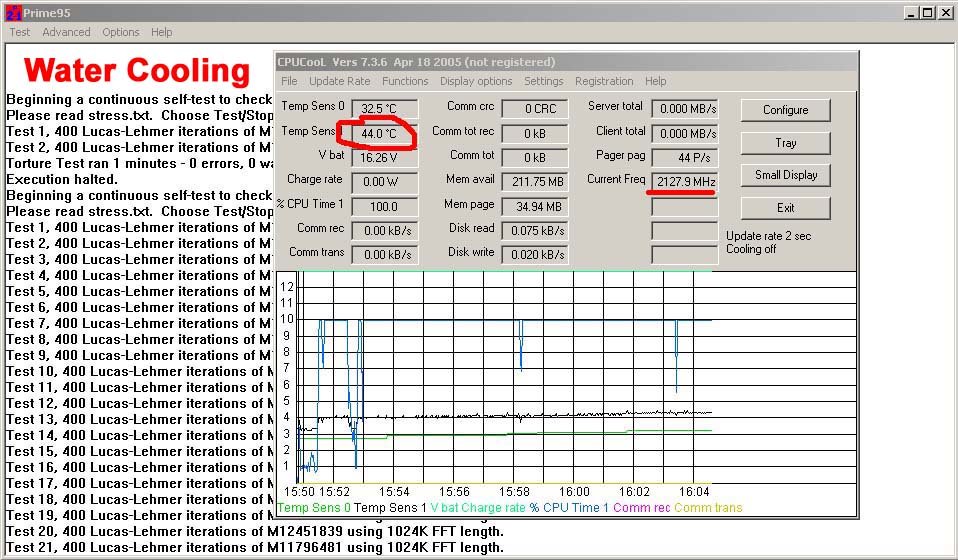 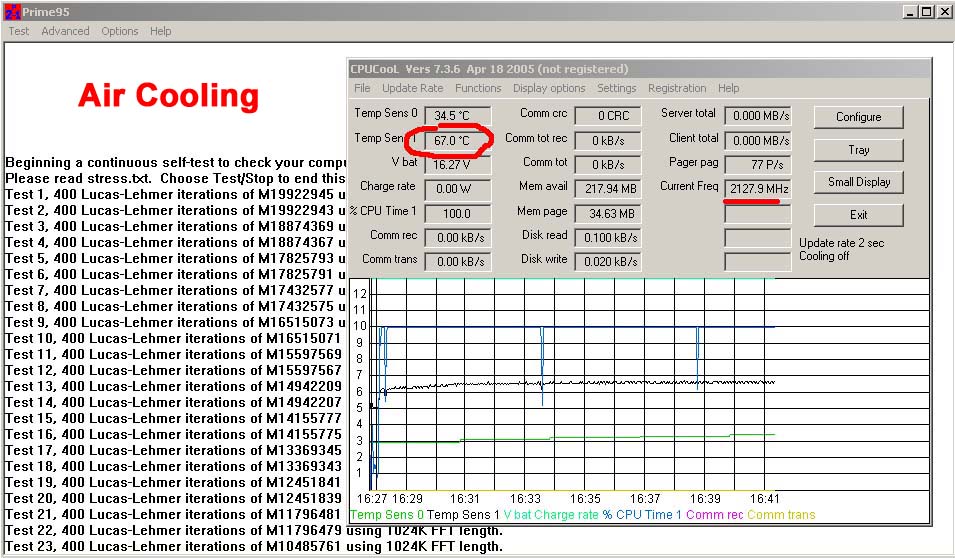 A difference of 23ºC – substantial to say the least. I checked the CPU grease pattern after the test: 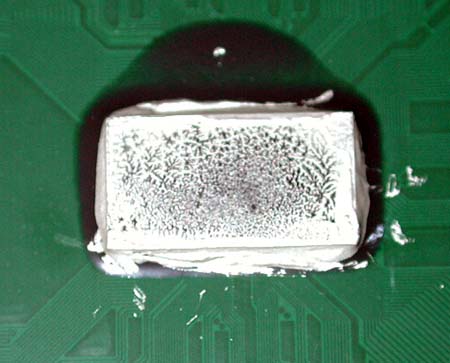 I did not run the waterblock test too long – both system fans were off during the test, and while there is no problem with the CPU fan, I was not comfortable with the chipset fan off as well – apparently the “controlling” factor is CPU temps for both fans. As I was stressing the system with Prime 95, I did not want to push the chipset too far without adequate cooling (if I were to do this long term, I’d get another GPU cooler for the chipset).

Considering the “cooling overhead” in a watercooling system and the moderate requirement of some laptop CPUs, KingWin’s AquaStar AS-3000 makes a very nice laptop watercooling system; for laptops running desktop CPUs, this may be the only way to keep temps in line. I had to use an external 12 volt power supply to run it – no internal connections possible.

Watercooling the Asus Z71A is a snap, as the CPU is so easy to access. Most other laptops are not so easy and as such watercooling may not be an option. However, in some high temp environments, adapting a good watercooling kit might be the way to solve persistent overheating issues. Not a portable solution by any means, but for a hot DTR, not a bad way to go.

Thanks again to Kingwin for sending this our way.
{mospagebreak}

I tested the KingWin AquaStar AS-3000 both with and without the GPU waterblock in the loop to determine its impace on performance.

KingWin’s AquaStar AS-3000 CPU and GPU waterblocks were tested using the CPU Die Simulator; I ran the fans at the lowest and highest settings to give a range of results. I first tested the system with the CPU waterblock only and then added the GPU waterblock and restested.

CPU Only, Fans On High

CPU Only, Fans On Low

At the highest fan setting, there was minimal difference; as fan speeds were reduced, the impact was much more pronounced, although the 0.03 C/W difference was at high stress; under idle or low stress conditions, the difference will be minimal.
{mospagebreak}

Always curious about how things are put together, I took the AquaStar 3000 apart to see how it’s constructed. Removing the top 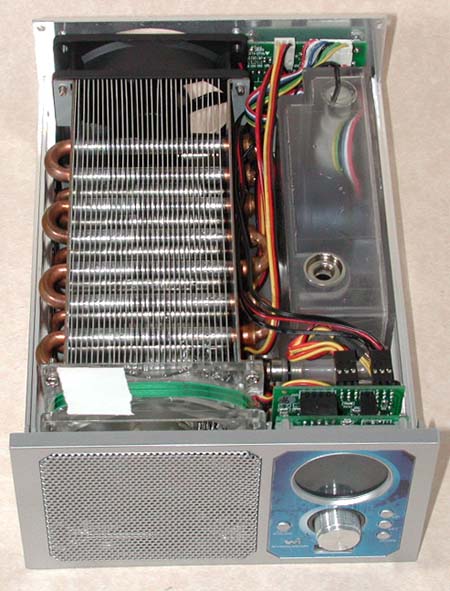 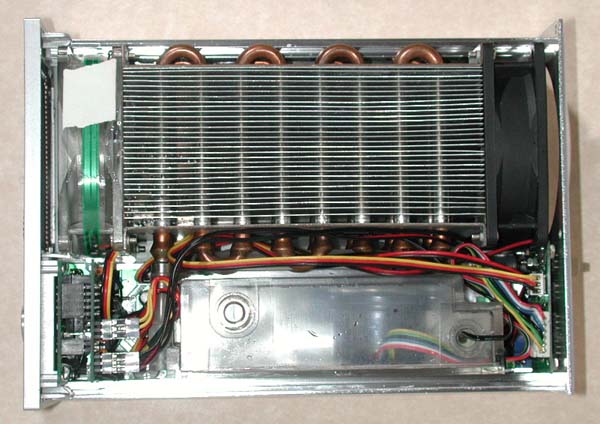 A very compact package – I removed the front panel for a better view: 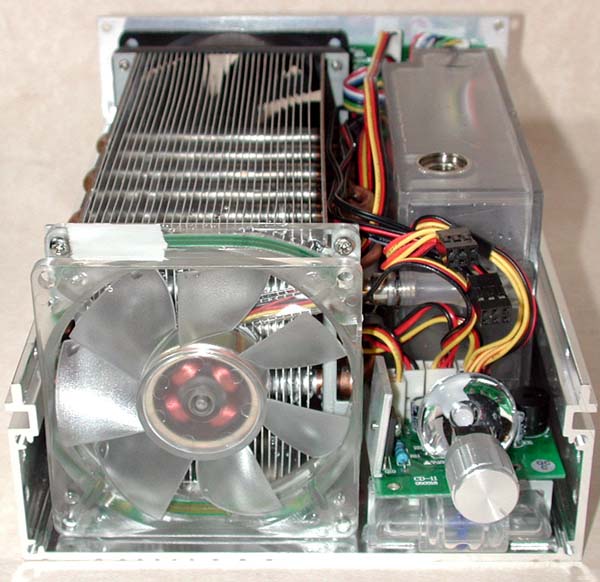 The fans blow from front to back: 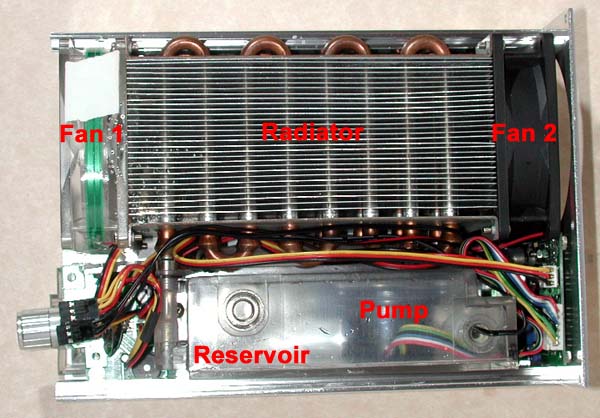 Typical of entry level watercooling kits, the pump is on the small side – it’s submerged in the reservoir. There is also the water level monitor; note that the fill opening sticks through a hole in the top – if water overflows, it will wind up inside the case, so be careful when adding water. 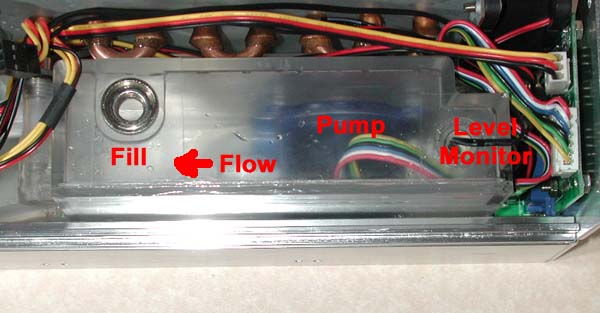 Lifting the front PCB a bit reveals the waterflow monitor: 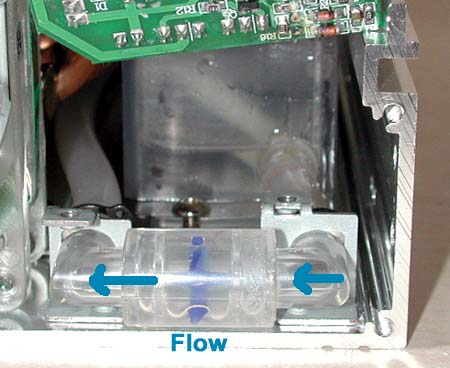 It’s a simple vane in the tubing leading from the waterpump. The radiator has two levels of copper tubing for a total of 16 pipes exposed to the radiator’s cooling fins. Note that there are LOTS of 180º bends – this results in high resistance; with a small waterpump such as this, waterflow through the system is modest at best.

Also note the the tubing is horizontal to airflow – this is not an optimal arrangement. The back of the cover contains a second PCB for the LCD and control functions: 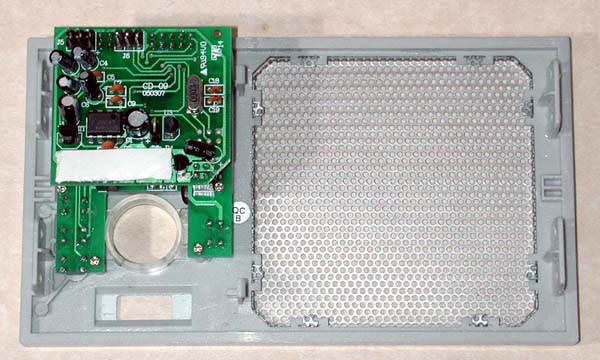 This is a two layer board: 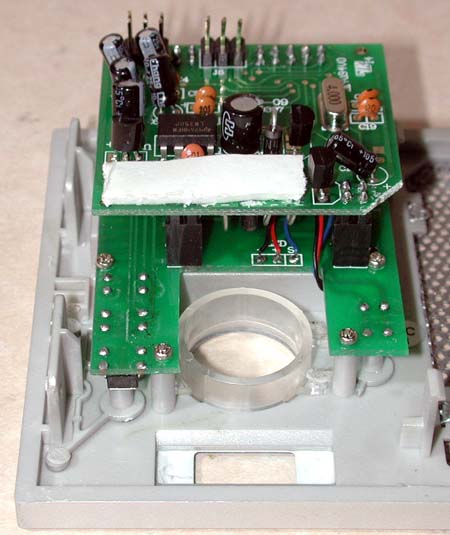 KingWin’s AquaStar 3000 is a typical entry-level watercooling kit – I would buy this kit and use it for what it is, a OK solution for average system cooling. While it might be possible to upgrade some components, such as the waterpump, the improvements in performance are usually not worth the expense.

I am a reader of your site for about two years and along the way have learned a great deal on overclocking from your site. I am 34 years old and an engineering tech for an oil navigation electronics firm.