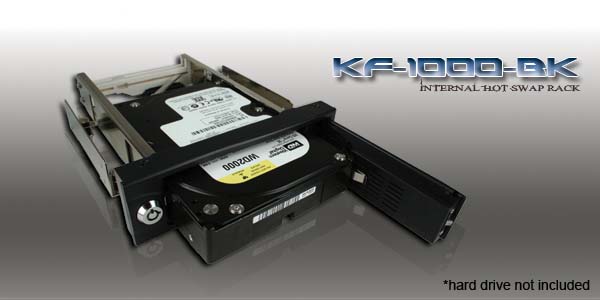 I recently upgraded my computer from a 4x 200GB Seagate RAID-5 system to a 4x 500GB Western Digital RAID-5 system. In the past I could always count on DVDs to be burned for every image/video I took, but it didn’t take long until the thought of restoring over 100 discs from different backup sets discouraged me. When you take into account the needs of a true recovery effort – keeping a copy of the data elsewhere – DVDs quickly become an unacceptable option. 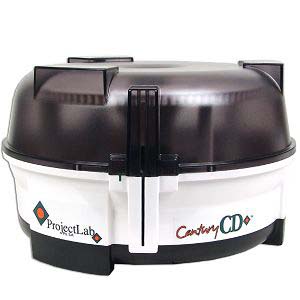 I set about looking for cheap, reliable, and fast external storage solutions so that I could ‘offsite’ the whole unit at my father-in-law’s home. He stores his duplicate records at my home, I store mine at his. It’s a strategy I recommend to all photographers that shoot digital – just imagine how miserable you’d be if you lost EVERY photo you’d ever taken (35K so far for me).

USB/FireWire is slow and requires a new unit be purchased for each upgrade – you pay for the cost of the interface, cable, and power supply on every purchase. Worse, I have had several horrendous experiences with LaCie 1 TB drives at work – a failure rate of around 20%. Lastly, my Windows 2000 box seems to suffer sporadically from the dreaded ‘Delayed Write Failure’ problem common to some USB/FireWire setups. All these issues contributed to removing any external USB/FireWire devices from the running.

Another possibility is a removable rack-style drive. I have nearly 20 unused ‘PATA’ racks with slide-out carriers that could be used in the past. Each drive requires its own carrier and that’s usually a small fee, but has added protection from dirt, grime, and fingers. These carrier racks run about $25 a piece in SATA format (why go backwards?) and the carriers were running about $15 each. The more times you swap a drive in and out of the carrier, the greater the chances you’ll damage it – and I’m too cheap to consider buying all the carriers I need. 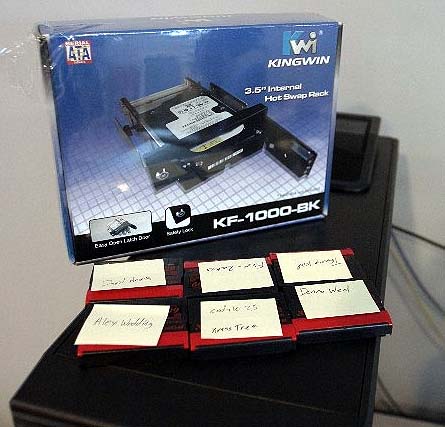 About the time Frys.com ran 500GB drives on sale for 90$ I ran across a photo of a ‘carrier-less’ drive bay – the bare hard drive literally would slip into the bay and be locked in place. I searched and found several models at different price points – the cheapest being the Kingwin KF-1000 (-BK for black). 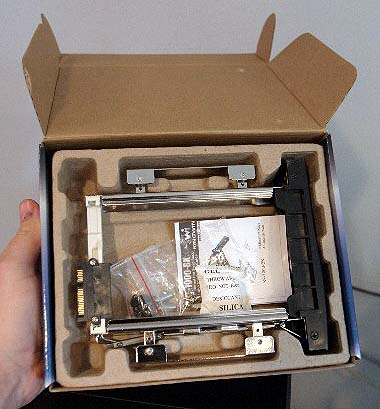 I received the package – nothing fancy on the outside or inside. Notice the way the rack operates: upon unlocking/opening the front (some force required), a cantilevered rod pushes the drive smoothly off the SATA connectors and disconnects it from both the power supply and the signal cable. This motion is smooth with a drive present, but somewhat jerky without one. 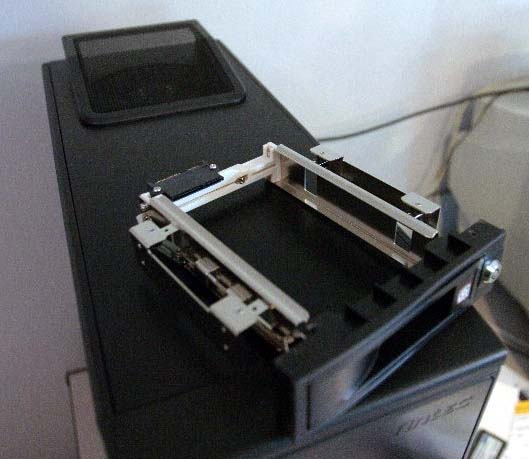 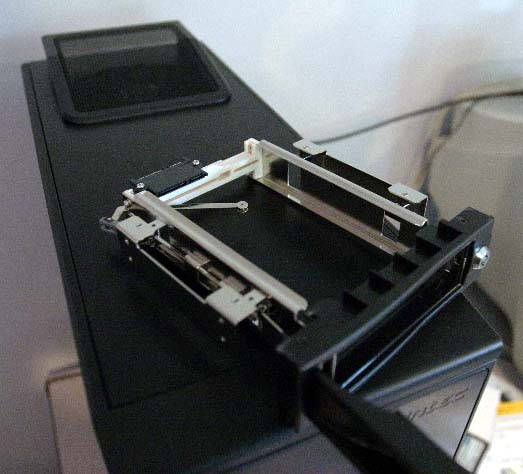 The 5.25″ mounting brackets were connected via grommets and were flexible – this sound isolation attempt led to difficulties when mounting in the rail system. Since the hot-swap rack was attached only at two points along the bottom of the rack via flexible grommets, the lockable rails would sometimes flex inwards. This made sliding the rack into the P180B case very difficult.

With dedication, some finger mashing and a sharp little rap, the drive bay was successfully mounted quite secure and snug. The rack didn’t flex or wiggle upon insertion of the drive and the slide rails, once secured, didn’t
seem to be affected by the flexible grommets that caused such consternation earlier. 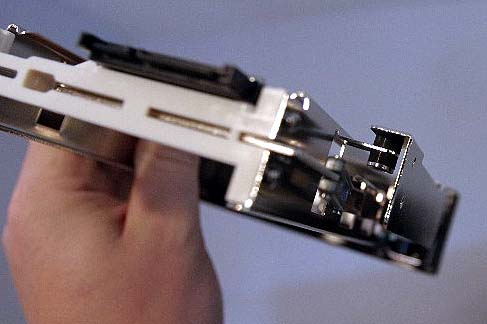 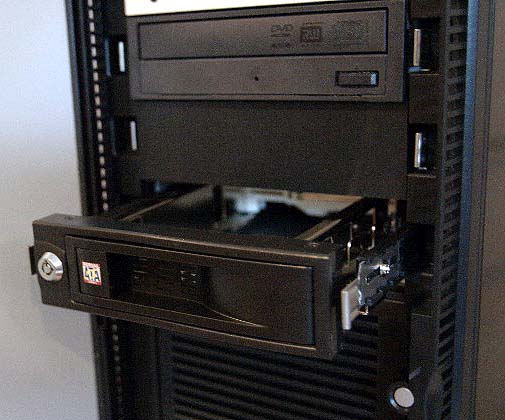 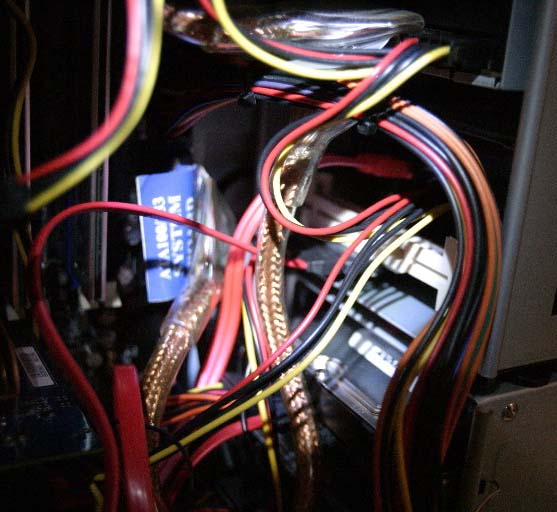 Cable management inside my case is a nightmare – too many long cables, too little space – but I show this picture to demonstrate that you’ll need a SATA power connector and nimble fingers to reach across the case to get to the other side. 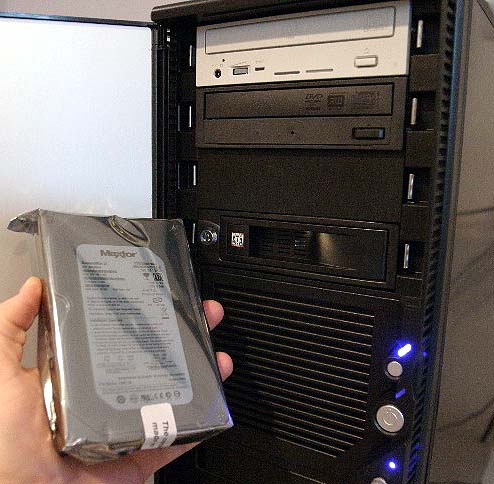 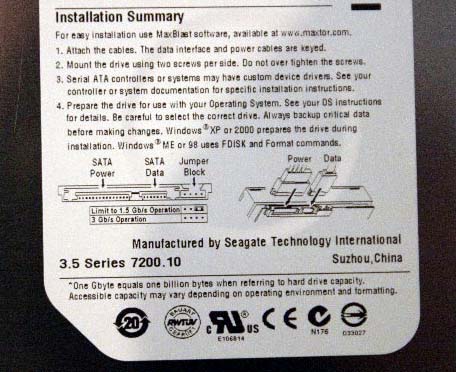 Don’t forget to remove the ‘bottleneck’ jumper – why limit yourself to 1.5 GB/s? 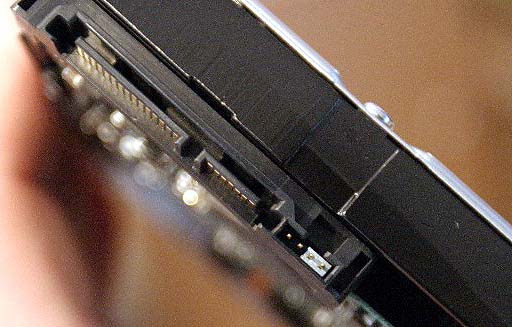 Once the case is reassembled, it’s time to power it up – but I’m not going to insert the drive yet – I want to test the ‘hot swap’ nature. Windows boots normally, then slide the drive in as far as it will go. The rack cantilever will start to shut, so just push it in the rest of the way. 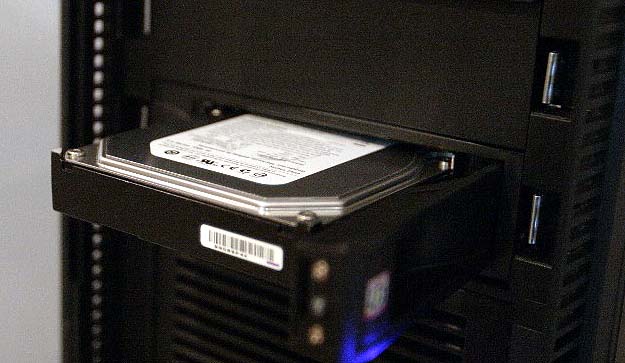 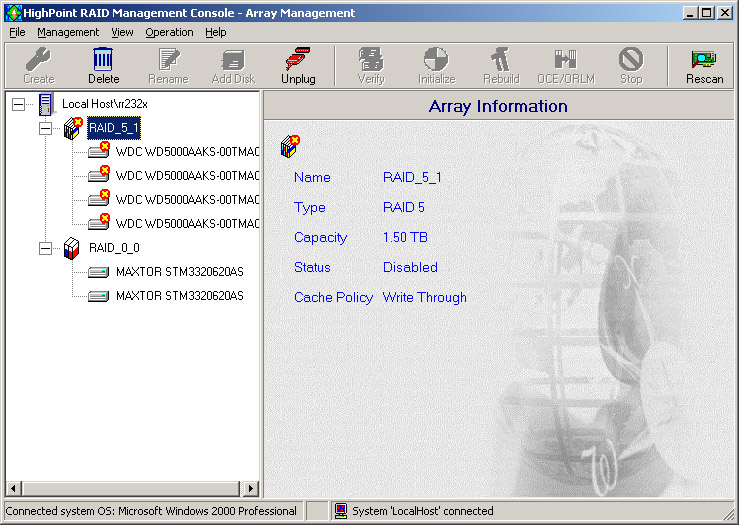 The computer recognized the hard drive all right, but it disconnected the RAID-5 array the SECOND I snapped the door shut. I don’t know if this was mechanical failure, a power interruption or what, but with the RAID card screaming drive failure (via a loud, rather annoying beeping sound), I decided discretion was the better part of valor – reboot.

A review of the System Log shows 4x simultaneous drive failures that would be consistent with a momentary power drop on that rail. When I rebooted, the system my drives were recognized. I’m not testing the hot swap again so soon. 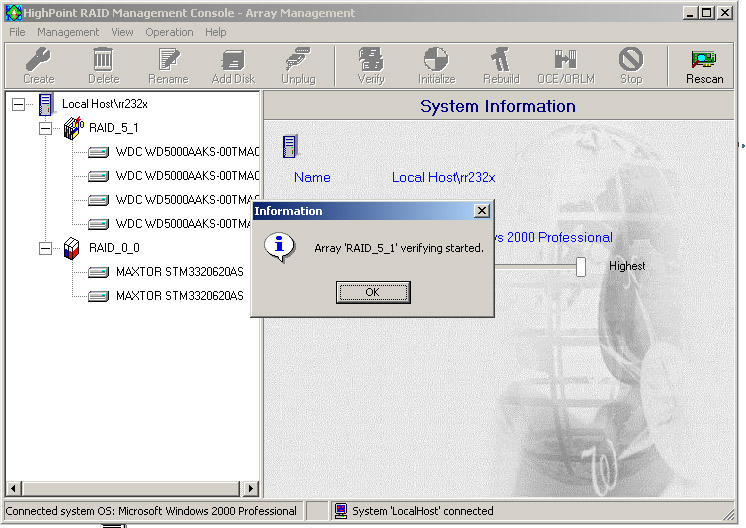 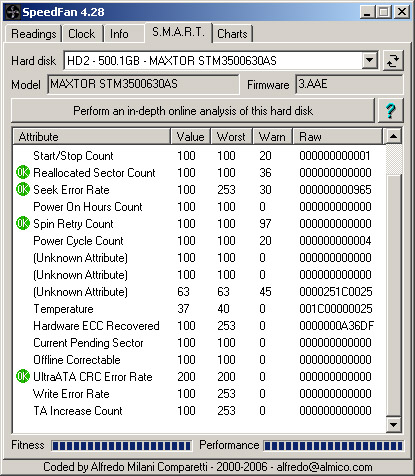 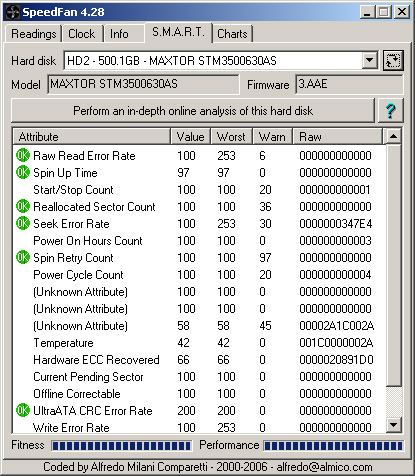 After 2 hours of backing up the C drive using Nero, the temperature has risen to 42ºC – still decent for an enclosure with no fan and on par with the RAID-0 array drives when they’re active.

My usual routine for replicating files is to copy them over and then run a program called MD5Summer, thereby creating a hash for every file. With raw camera images, this is very simple and quick (it takes a few minutes per directory), but on a whole drive it can take hours. All it can do is tell me that a file changed from when it was copied, and it’s somewhat manual in operation.

This is how I copied all the files over from the RAID-5 array to the backup drive – I already maintain individual MD5
checksums (every CF card that comes in gets checksummed and backed up before I even touch the data – safety first!) for each date, so it’s very easy to cascade them into a larger file. 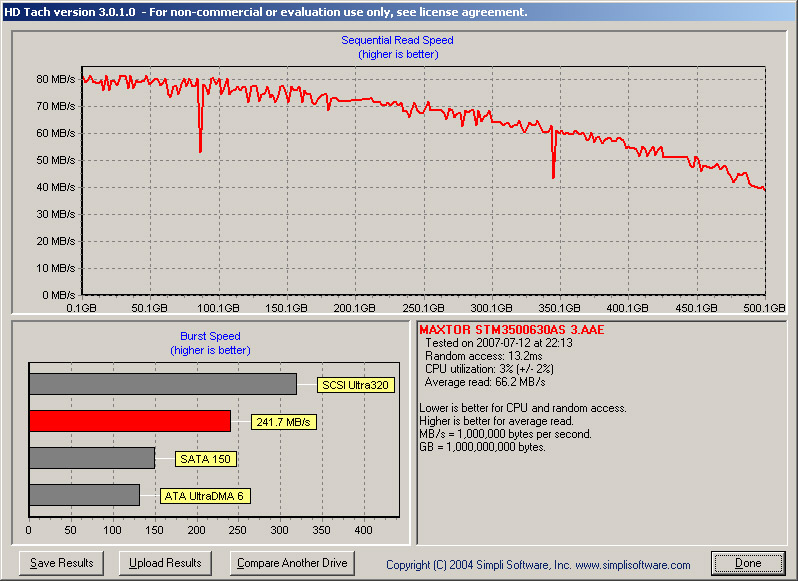 A benchmark of the 500 GB drive is provided to show what the average sustained transfer is so that we can determine how long it should take to sequentially copy all of the files from one batch to the other.

The drive itself could not be heard over the medium fans inside the computer, but the head seeks could be heard as the files were copied; however, this drive wasn’t isolated other than the rubber grommets, and it was still quieter than the hard-mounted boot drive in the machine (it uses large, fan-style heatsinks to mount in the 5.25″ bay).

One difficult concept that most individuals have trouble with (and I constantly run into this at work) is the absolute magnitude of the data sizes involved. Yes, everyone knows that 1 MB is one floppy disk, and that 1024 floppy disks is 1 GB. A 500 GB drive is therefore 512,000 floppy disks. That 1.5TB RAID-5 array is 1.5 million floppy disks.

Moving large quantities of data around requires a significant amount of time and the sizes are so much larger the human brain can grasp them intuitively. It took slightly less than two hours to transfer the 307GB of raw data from the RAID-5 array to the 500GB Maxtor, giving an approximate rate of 2.57 GB/min, or about 45 MB/second. I then transferred another 50GB folder of raw video from a RAID-0 array to the drive, which even at 3/4 full it still transferred at 53 MB/sec, MUCH faster than a standard USB external drive. 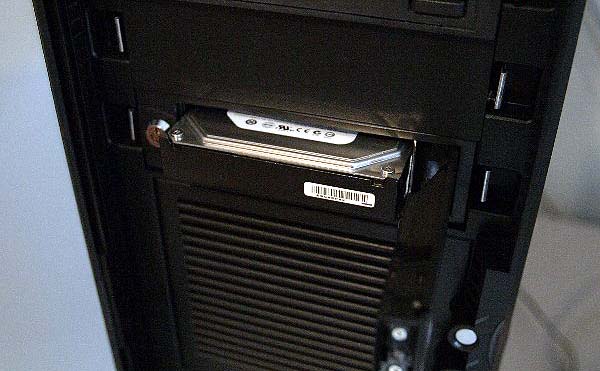 Using the “Remove Hardware” option, I ejected the drive, let it spin down, then opened the clip on the door to eject it. No hardware failure was seen and the ejection was rather smooth. The drive was warm to the touch as you’d expect but not hot. Sealed in its own anti-static bag and placed back in the original box, it now heads to my father-in-law’s home for safekeeping.

Kingwin’s KF-1000 Internal SATA II hot-swap rack fulfilled all my expectations (except for that power interruption, but who knows really what caused that) and did the job admirably. Since it’s naturally vented, I expect to see a small increase in airflow through the front slots. I wish there was a small removable filter but that’s easily taken care of with a nylon scrubbing pad.

I would recommend this device to anyone that looks to do large, offsite backups.

Pros: Everything about this unit worked well. Best of all the price-point won’t bring up the low-cost HDs that are appearing on the market.

Cons: Drive insertion might cause momentary interruptions, but it may be my technique. It’s easy enough to reboot regardless after adding in this device. More slots for air would be welcome but that may compromise structural stability.

I went looking for a Santa today. I wanted him to give me a C1 stepping chip. I went to three retail stores. I hate going to computer stores, because I know what I am likely to get before even Read More

Intel said that they were going to work on power reduction in its next stepping of the PIV. Well, the D0 stepping is now available for socket 775 PIVs, and so are the datasheets for them. If you look at Read More

Not a long while ago, on September 29th, the new, current version of the most popular video cards benchmark software, 3DMark05, was released. The software has gone through a long way since her first versions, 3DMark99 and 3DMark2000 (which have Read More