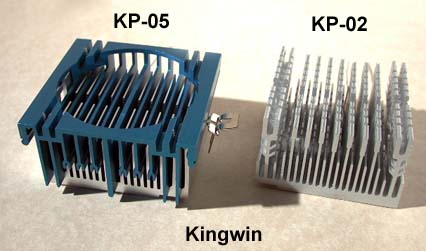 Construction of the KP-02 looks like an extrusion with ridges and outcroppings designed to increase surface area. The KP-05 is more interesting: It is a two piece heatsink with the separate pieces pressed together to form one unit. Cooling performance on such a unit relies to some degree on the quality of the bond between the two units. Best would be something like soldering, worst would be a sloppy press fit. The joints on the KP-05 seem tight, but I can’t tell you what it looks like at the microscopic level.

Both heatsinks are very quiet – the spec is 31 dBA and, in use, it’s a whisper.

However, quiet comes at a price – lower airflow means lower performance. To give an idea of what to expect with a higher cfm fan, I tested each with a 28 cfm ADDA 60×25 mm fan and also tried a Papst 33 cfm unit on the larger KP-05. Both heatsinks measure about 60mm square, so they cover the socket’s footprint.

The clips are not bad – not finger busters like some we’ve seen, but as a matter of routine, I do use a needle nose pliers to set Socket A clips; these were pretty easy.

I drilled a hole in each heatsink’s base above the CPU’s core and epoxied a thermocouple inside the hole. Temps were measured with the Omega HH23 Digital Thermometer. Ambient temps were measured with a thermocouple placed about 1 inch from the fan’s intake. I used Prime 95 to stress the CPU on an Iwill KK26, running a Duron 800 @ 800, radiating 41.7 watts, Arctic Silver grease. Considering the size of these heatsinks, I did not want to push them too far.

Kingwin’s C/W specs on the KP-02 range from 0.38 to 0.74, and the KP-05 from 0.35 to 0.71, the higher C/Ws presumably being what to expect for a 1.3-5 GHz T-Bird. A range such as this is refreshing to see (most specify only one C/W) as it presents a more accurate picture of what to expect from these heatsinks. It does indicate that there is not a lot of headroom in these, which, just looking at them, is to be expected. I personally would not be too comfortable with either of these on a T-Bird over 1 GHz.

Although I did not test them for Socket 370 CPUs, the lower cooling requirements for Intel’s PIII Flip Chips may make the Kingwins a competitive cooling option. For example, a PIII 700 radiates half of what the Duron 800 does. Next test is on a PIII to see how it does.


EK-WW block for P4 and OPTERON