SUMMARY: An effective noise control tool at a reasonable price. 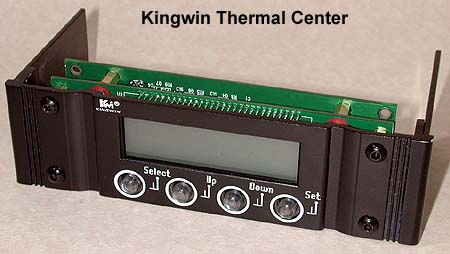 The good guys at Kingwin were nice enough to send a sample of their Thermal Center to test out. The outstanding feature of this unit is the ability to control the speed of three fans by temperature probes – I’ll cover this is some depth below.

The large round receptacle is for a battery which keeps all settings, including current time, from being lost at shutdown. 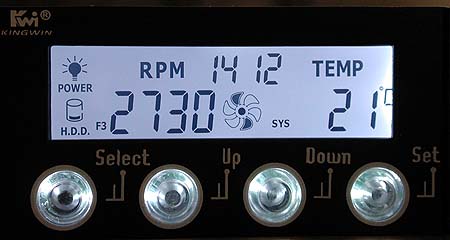 the LCD is a pleasing blue background showing current time, fan RPM, temperature and Power and HD indicator lights – these are hooked up to the motherboard’s pins for these functions. In AUTO mode, the display cycles through each of the three fans every 5 seconds. You can also manually set the unit to display only one item – CPU for example – continuously.

There are two PCBs in the unit:

The rear PCB contains the fan voltage regulators while the front houses the LCD and control circuitry.

The unit ships with all the parts needed: 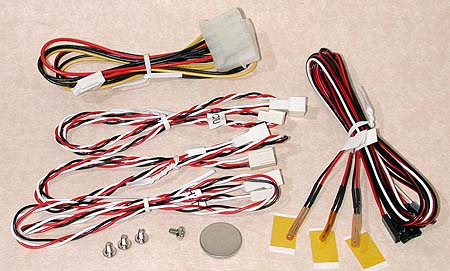 The feature that I find noteworthy with this unit is the ability to link fan speeds to temperature. The following graph 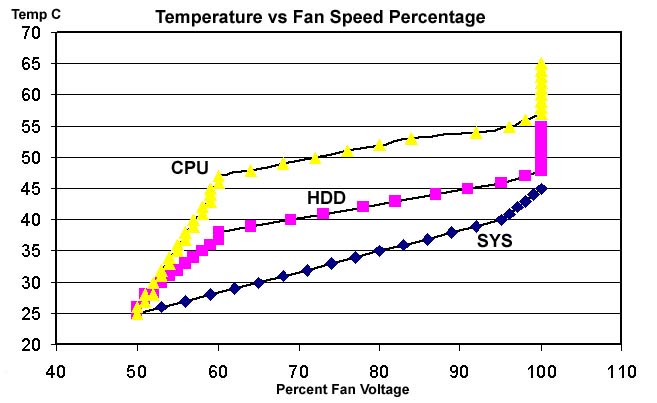 shows the ranges pre-set in the unit. There are three different profiles, labelled CPU, HD and SYS. Fan speeds are controlled by varying voltage from 50 to 100%, and each profile has a different temperature range:

However, if you look closely at the graph, you’ll see that fan voltages are truncated at the upper end. If you take the effective range for fan voltages as from 50 to 95% (the effective performance difference between 95 to 100% is negligible), the temp ranges are as follows:

Frankly, I think these are better ranges anyhow, so I’m not complaining.

It is possible to set different temperature points within these ranges; for example, instead of the 40ºC range in the CPU function, you could set the alarm at 35ºC. While this will then run the fan at 100% power @ 35ºC, it will also sound the alarm. I don’t see this as a desirable method to change fan speeds (very noisy) instead of using the preset temp ranges.

The lower temperature could be an issue if you have high case temps, although with three temp profiles, users should be able to find a workable profile for CPU cooling.

I get a lot of emails asking for the impossible – a very quiet heatsink fan with great performance. Sorry, the laws of physics preclude this holy grail. However, what you can do with this unit is couple fan speeds with temperature, so that when you need performance (= higher fan speed), you get it. When the CPU is at idle of not being stressed, which is MOST of the time, fan speeds decrease to very tolerable noise levels (obviously depending on the fan).

To test this out, I used a Vantec heatsink on a P4 1500. I placed the temp probe touching the edge of the CPU; the only modification I made was to cut the temp probe’s tip such that the thermistor was closer to the edge. I used the SYS temp profile (for a narrower temp range) with the following results:

The “Kingwin” entries are with the unit enabled, the others without.
¹ Noise is measured 8″ from the fan’s intake with a sound meter – 50 dBA is fairly quiet 3′ away.
CPU Case Temp are temps measured at the top of the CPU case; Ambient Temps are measured 1″ from the fan’s intake; MBM Temps are CPU diode temps; Kingwin Temp and RPM are displayed on the LCD; Actual RPMs are measured with a digital tachometer.

Highlighted in red are what I feel are the significant findings. Under stress, I had essentially the same performance results at lower noise. At idle, the difference is considerable, as you would expect. Under “normal” use, most users will hear much less noise without sacrificing performance.

Note that the LCD’s displayed rpms are erratic at low voltages – I have seen this with other fans, so you may see rpms in some instances which are not real. The unit appears to scan at a high rate such that as soon as temps increase, the fan speeds up.

For those of you who are looking for effective CPU cooling performance and low noise, IMHO linking fan speeds to temperature is the way to go. Coupling this unit with an aggressive heatsink/fan should allow 24/7 users to sleep at night (assuming the CPU is at idle) while still getting good performance under stress.

With a price of about $30, Kingwin’s Thermal Center looks like a cost effective solution for noise control.

Thanks again to Kingwin for sending this our way – a nice product. It’s available for purchase HERE.

SUMMARY: Very quiet, but very subdued performance; Lasagnas are great coolers for GPUs and Northbridge chips but needs serious steroids to be of real interest as a CPU overclocking cooler. TennMax makes a great little CPU/chip cooler called the TennMax