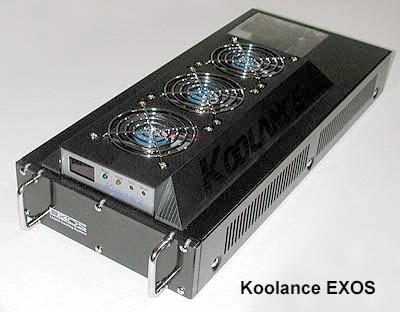 The good guys at Koolance were nice enough to send a sample (via Infotech Systems) of their latest watercooling entry, the Koolance EXOS. The first thing you notice from the picture above is that there is no case – this is an external watercooling system which can be attached to any case. Finally! It took a while, but this product was inevitable.

I’m going to first give you a look at what’s included and I’ll report back on performance by mid-week.

The top unit houses the

The EXOS comes in a neat box: 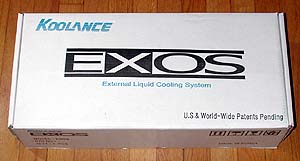 Opening the cover reveals all the included hardware, with the top unit under it: 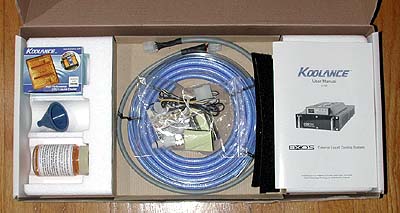 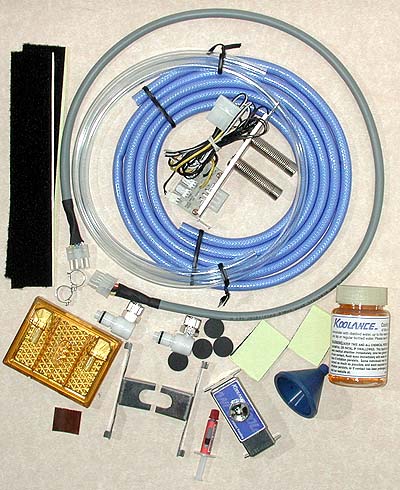 The waterblock is optional – included was Koolance’s CPU 200 Gold (rated for 200 watts); also optional is a strap to secure the unit to your case. I would rather bolt the unit to the top – looks doable (I am not going to open up the unit until after I run the tests). The waterblock 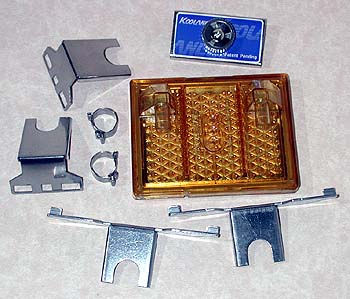 includes mounting brackets for both Socket A/370 and P 4 and two hose clamps. The waterblock features a plastic top; visible is the pyramid shaped top of the base – increases turbulence and cooling area: 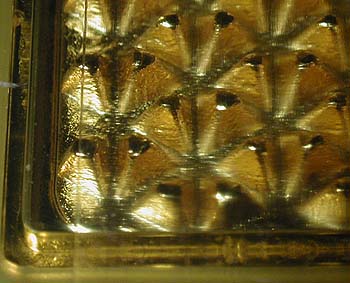 The base is highly polished: 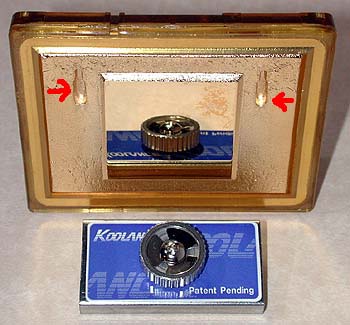 The arrows point to depressions in the base for the CPU temp Probe.

The EXOS sits on top of a case with tubing routed through a slot cover: 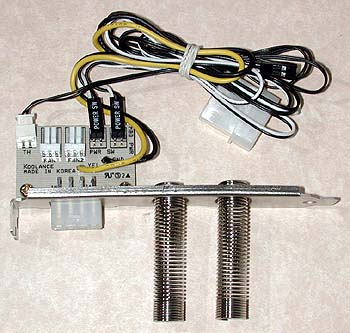 The Slot Cover has attachments for

The springs are to feed the tubing from the cooling unit through the case to the waterblock. There is a power cable which connects the small PCB board to the top unit – this feeds data back to the master control unit to regulate fan speeds. The front 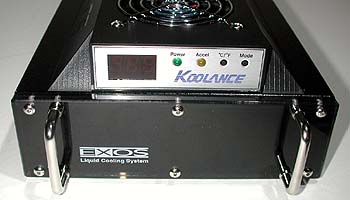 In addition, there is an audio alarm if temps hit 50C and a hard shutdown if temps hit 53C. Temps are monitored by the CPU Temp Probe which is fitted to the waterblock’s base. 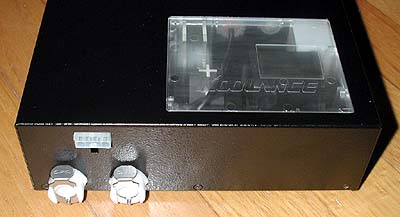 is at the back of the unit and features two 12v pumps. The reservoir is clearly visible; the fill plug is underneath.

Overall, looks like a nice unit. I’ll report back with performance tests about mid-week. The unit will be available October 25th.
{mospagebreak}

First thing to do is connect up the hoses. In this test I just cut the blue “external” tubing in two and screwed one quick connect plug on each piece – these then connect to the back of the unit. 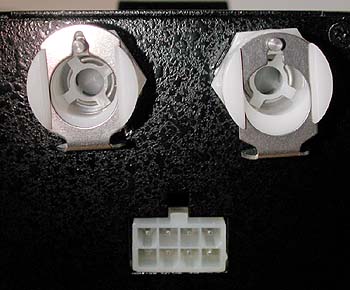 Quick connect fittings for tubing and system power; the tubing fittings freely rotate to any direction.

I then connected the other end of the tubing to the waterblock. I did not use the clamps provided by Koolance as I really prefer ones that I can screw on and off. Nothing wrong with the Koolance clamps, just my preference. I should point out that the Koolance clamps are more difficult to remove than screw clamps.

The tubing is small so I fitted a “collar” around the tubing so that the screw clamps could easily fit.

Once assembled, turn the system over and fill the unit with liquid: 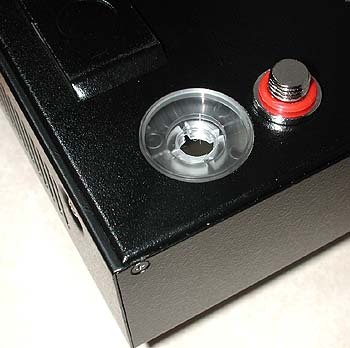 Shut down the power, fill again and power up, repeating these steps until the reservoir stays full under power. At this point, the system is ready to go.

I ran the assembled the system overnight to check for leaks – no problems. All assembled and ready to go, it looks like this: 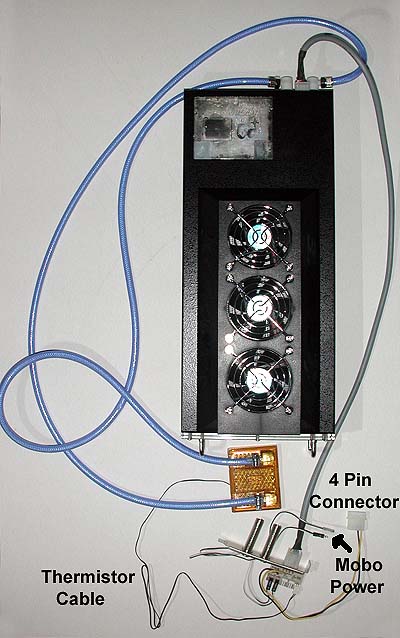 It took me about an hour to set it up, including time to adapt the screw clamps to the waterblock. I think almost anyone can fully assemble this system up in under three hours (including reading the manual completely). With overnight testing, you should be able to convert any case to watercooling in 24 hours – with no case cutting.

To turn the EXOS on and off, the “Mobo Power” plugs connect to the case’s power plug and motherboard power pins. Since the system is all 12 volt powered, it powers up when you hit the case’s power button. Running Mode 1, the EXOS draws about 15 watts, and with the fans running 100%, 20 watts.

There is an audio alarm that goes off at 50 C, and then the system shuts down at 53 C.

With the fans running in Mode 1 (45%), the EXOS is whisper quiet. If you have case, GPU and northbridge fans, you will hear those before you hear the EXOS. At 100% power, I measured noise at just about 50 dBA three feet away – about as noisy as three case fans.

As a side note, I also noticed a very slight plastic-type odor from the unit under power. Not objectionable, just something I noticed. I would suspect this is because it’s new and will fade over time.

The mounting clip is a joy to use – the CPU 200 includes brackets for both Socket A/370 and P 4. Once the socket or bracket lugs are engaged, you turn the knurled knob until it clicks – that’s it! You can’t over tighten, so no danger of breaking socket lugs with this system.

The Koolance CPU 200 waterblock has a large footprint – it measures 83 x 64 mm (3 1/4″ x 2 1/2″). I found that it would not fit on my Shuttle AK31 due to a clearance problem with the fan on the Northbridge. Users should carefully measure socket clearances before committing to using this waterblock. P 4 motherboards are not a problem.

Koolance uses two 12 volt waterpumps in the reservoir – I would really prefer one high cfm pump instead. However, if you’re out to mod the EXOS, I kind of think it defeats the purpose and you might as well go for a “roll-your-own” setup – you’ll probably wind up paying more to mod the EXOS than starting from scratch.
{mospagebreak}

I tested the EXOS with the Koolance CPU 200 waterblock. Users may substitute other waterblocks, but should note that adapting larger nipples to 1/4″ ID tubing is required.

The Koolance EXOS was first tested on the CPU Die Simulator which gives results that are unaffected by motherboard influences. I then tested it on an Iwill KK266+ and Acorp 4S845A as examples of what users might see on their systems.

Overall, the Koolance EXOS is nicely packaged, easy to install and delivers an excellent balance of low noise and CPU cooling.

The most difficult task in setting up the EXOS is installing the clamps on the waterblock – on a scale of 1 – 10, maybe a 2.

Based on these tests, I see no need to run the EXOS at full blast (Mode 3). At over 120 watts, the EXOS waterblock temp just made it to 35 C. In the summer with higher ambient temps, it will be noisier, but nowhere near Delta 38 noise levels. Mode 2 should be fine for all conditions.

Thanks again to Koolance for sending this our way. The EXOS will be available from The Heatsink Factory
and Infotech Systems around November 15.
{mospagebreak}

The radiator has a rubber shroud so that the fans are efficiently pulling air through the radiator (the fans blow out, not in). It measures 11 ½” x 5 ½” overall, with the finned area measuring 10″ x 4 ¾”. The radiator is built the same way as a car radiator, with plenum chambers at the top and bottom.

The pump assembly is not bolted in and slips out easily: 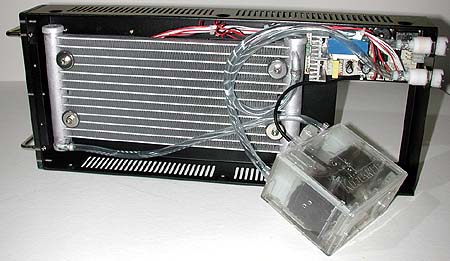 A close look at the reservoir shows the two 12 volt pumps: 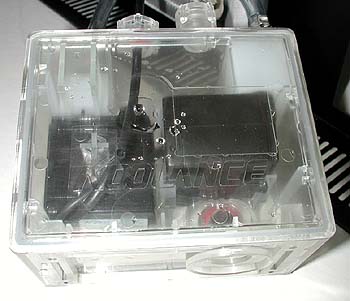 Koolance uses two to give a measure of “fail safe” security. The reservoir is sealed – the top appears to be glued on.

Finally, a closer look at the PCB controller: 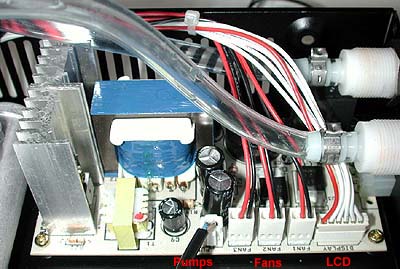 Note the heatsinks for cooling the power chips. All the components (pumps, fans and LCD) are hooked to the PCB using plugs, so completely disassembling the unit is an easy chore. Note also that if you wish, the pump assembly is modular and a higher flow in-line pump could be substituted, although with its very good performance, I would not be tempted.

The Koolance EXOS is a big, but expensive (pricing about $265), step forward for watercooling. It is the easiest kit I have seen to segue easily into watercooling. It looks like it can be modded fairly easily and could serve as a platform for a more aggressive cooling solution.

Since it is so portable and adaptable to any case, I would consider the Koolance a long term investment for quiet, efficient PC cooling.

PS: I think this Directron SF-201-B case makes a great mate for the EXOS: 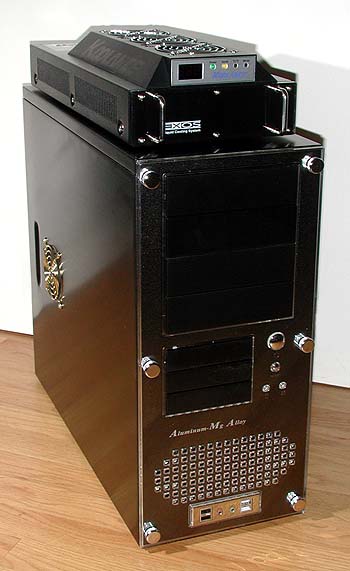