SUMMARY: Swiftech’s Q-Power does a better cooling job, but the Koolance is no slouch either.

I have tested both Swiftech’s Q-Power
and
Koolance’s PC2-C Liquid Cooled Case separately. Readers have been asking for a comparison between the two, so I did a head-to-head test. For details on each system, please click on the links above.

I used exactly the same motherboard, CPU etc., in each case, ran each at idle and under stress and recorded results. For CPU temps, I used one of my heatsink test boards, the Shuttle AK31 3.1, to directly read XP diode temps. First, let’s compare what’s inside each case:

The water pumps used are very different. The Koolance pump (on top) 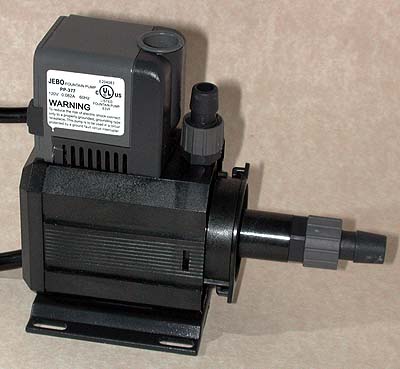 is clearly smaller; however, note that Koolance uses two 12 v pumps for redundancy (you DO NOT get twice the flow rate with two pumps), while Swiftech only one. The Eheim 1048 (110 v) is one of the best for reliability and you can get spare parts for it.

I have used both pumps; the Eheim I have never missed a beat and is absolutely silent. The Koolance case I have been using every day for almost a year (the first one) has also not missed a beat.

Swiftech’s waterblock is clearly more massive than Koolance’s, and by a wide margin: 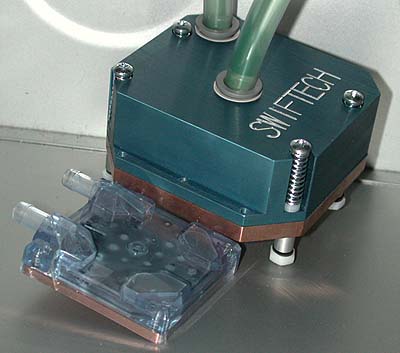 The Koolance uses tubing with an inside diameter of 3/16″ while Swiftech uses ¼”.

The Q-Power does not employ any fan control or CPU monitoring software in its system; the fans spin at one setting under all conditions.

I asked some Koolance vendors about RMA experiences and it is very good. If there are RMA issues, Koolance is very responsive and readily honors their warranty.

Readers have told me of Swiftech’s commitment to customer service, so between the two, I think either one will step up to their responsibilities without grief on the consumer’s part.

I used the same components for each test:

I installed the components in each system, checked for leaks and then ran at idle for an hour and recorded temps. Then I ran Prime 95 for another hour, recording temps again.

For a CPU at 100 watts, the Swiftech will outperform the Koolance by 8 C.

The Q-Power has a clear performance advantage over the Koolance. Considering its more powerful pump and higher airflow through the radiator, it was a question of by how much, not if.

I measured noise from each system with a Radio Shack sound meter placed three feet each system’s side. Both systems barely registered at 50-52 dBA. As to pitch, the Koolance sounded higher than the Q-Power; I added a case fan to the Koolance – without it, it would be slightly quieter.

Between the two, I would say the Q-Power was less noticeable, although the differences are not so great as to prefer one to the other. Compared to any other system using aggressive air cooling, there is no comparison – each system will win this one hands down, no contest.

Both the Koolance and Swiftech do a great cooling job with noise levels far below aggressive air cooling solutions. The Q-Power is beefier, has more cooling potential than the Koolance, uses a better case and consequently costs more – how much depends on what you include with it.

The Q-Power I think appeals more to “tweakers” and those who need lots of room for hard drives and other components. The Koolance is more “sedate” and I think would appeal more to users looking for superior cooling and low noise in a “set it up and forget about it” PC.

Either one is easy to set up for anyone that has ever assembled a system – there is no witchcraft or rocket science in either system. Either will serve well for an overclocked system, although the Q-Power has more “overhead” for possible peltier based systems.

Thanks again to both Koolance and
Swiftech for allowing us to evaluate each system.

²These C/Ws are not comparable to CPU Die Simulator results.