Replacing the internal waterpump in the Koolance watercooled case – Joe

SUMMARY: A failed water pump and its repair makes the Koolance better. 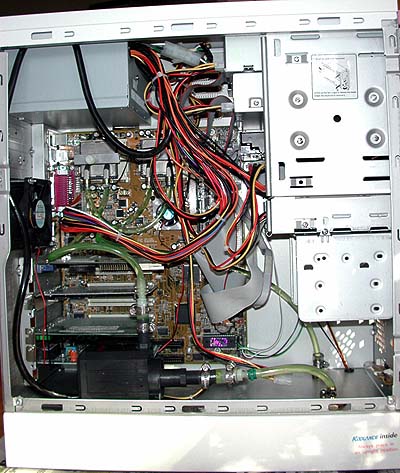 A BP6/Koolance combo with the excellent EHEIM 1046 waterpump.

I am indebted to James Kirby’s excellent Koolance Performance Hack for pointing the way to repairing the Koolance. My son has a BP6 and he bought a Koolance in a dual configuration to quiet it down. He called me a couple of days ago and said “It’s not working”.

After a couple of questions (e.g., “Do you see any water?”), it sounded like the pump packed it in. I told him to bring it to the “shop” (my office) and I would take a look at it. Sure enough – plenty of fluid but no pumping. After we talked over some options, we decided not to wait for a warranty repair (Why replace when we can do something better/) and I would attempt a repair.

Now, my Koolance (exact same model) runs great – no problems in over six months. I’ve been very pleased with it, but I always thought about doing Jim’s Performance Hack. The problem is I use this box every day for 6-8 hours, so the down time is hard to come by. With my son’s dilemma, I now had a chance to try it out.

Removing the base and it’s components is pretty simple – no hidden tricks here. Basically:

This is what’s left of the base with everything removed: 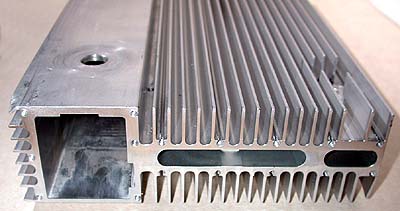 The pump on the right is what’s inside the base, the EHEIM 1046 on the left. This is my favorite waterpump – it’s warranted for two years and you can buy spare parts for it to rebuild it – extra quiet and very reliable. 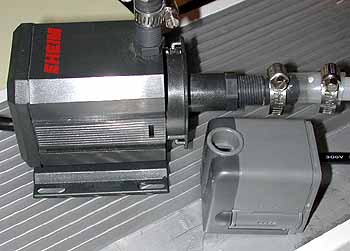 The front and back plates to the base use rubber gaskets to keep them watertight. The brass fitting in the front is the pressure relief valve. The hole in the back center is the drain/fill plug and the one on the right is for the power cord to the waterpump. 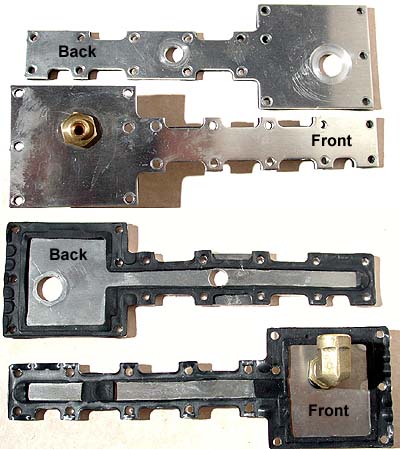 Since the internal pump is going, I used a 3/8″ stainless steel bolt with rubber washers to seal it up:

I bracketed the rubber washers with stainless steel washers to seal the hole – works great!

After some deliberation, I decided I would use as much of the original Koolance gear as possible, so the only thing I replaced was the pump. Jim replaced all the gear with larger diameter tubing and waterblock, but I wanted to see what difference just the pump would make.

One thing I was to add a one inch extension inside the base to the brass intake, so that even if the water level is down by a half, the pump will draw water (see an example HERE). I then replaced the front and back plates, filled the base with WATER (to test everything) and tested the base and pump to check for leaks. 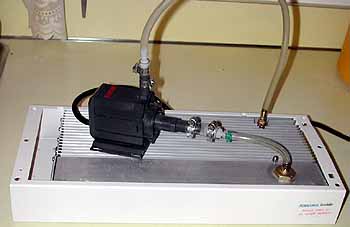 I did the “Kitchen Counter” test overnight without any problems, so then is was reverse the steps and put everything back together. Put the motherboard in first, then cards, etc., and the pump and waterblocks last.

Filling can be a pain – I used a small bottle that I had to refill about a dozen times. Tip the case forward so the back plug is the highest point and start adding fluid. As it fills, fluid will enter the lines, priming it so when the pump goes on, it’s drawing immediately – I did not have to prime it.

Because the EHEIM has its own plug, it allowed me to run it without the power supply. I ran it for a while to check everything, then I cut the EHEIM’s power cord and spliced it into the power plug that exited the power supply for the internal pump. Once this is done, powering up the system turns on the waterpump – no separate plug.

I powered it up and ran it to check temps. It now runs about 5-7C cooler than before, so the better pump is a good fix.

This does bring up an issue, however: A repair such as this is not trivial and voids any warranty claim. It took me about 5 hours total over a day and a half, but I had lots of odds and end around, such as clamps, hose, etc., which most will not have. If you can’t afford the down-time for a potential warranty repair, then either have a back-up in the wings (your old case) of suffer the noise for an easier to repair air cooled solution instead.

Those who “roll their own” typically have all components in the open (as does Koolance’s latest case, the PC2-C) so repairs are much easier. Koolance’s use of an internal pump does have its downside, although it looks like this unit is no longer available. Too bad – I still think this is the quietest watercooled case around.