I’m sure we can all agree that Lamptron is most well known for their quality fan controllers with high wattage ratings per channel. We have had the opportunity to test quite a few of their offerings including the FC2, FC3, FC5, Touch, FC8, and FC9. Today, we have a very unique fan controller from Lamptron, the FC10.

The front of the box has a picture of the FC10 with its unique “nixie tube display” and a picture of the remote used for fan control. The front also has the channel rating printed so we know how many watts each channel can handle. The back of the box has the small specifications and features list as well as a contents list. I noticed the content list is missing one item, the included temperature sensors seen a little further down in my contents picture.

Upon opening the box, we’ll see Lamptron used a cardboard box with a sleeve, and that the contents of the box are secured and protected by foam. The controller arrived without any noticeable physical damage, so it seems the packaging did well. 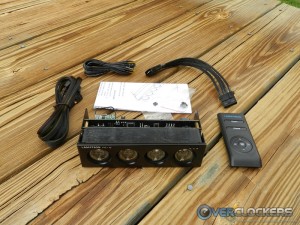 Looking at the top view of the FC10, we can see there are two PCBs. One is for the four Nixie tubes and the other is for everything else.

With a close up of the back of the controller, we can see all the connectors, jumpers, etc. Along the bottom we have the four fan channels and the Molex power connector. There are four temp sensor headers labeled PT1-PT4 near the top edge of the PCB and to the left. On the right side, it gets kind of crowded. There is the Fahrenheit/Celsius jumper, the remote’s antenna, the alarm’s jumper, and the alarm’s speaker. 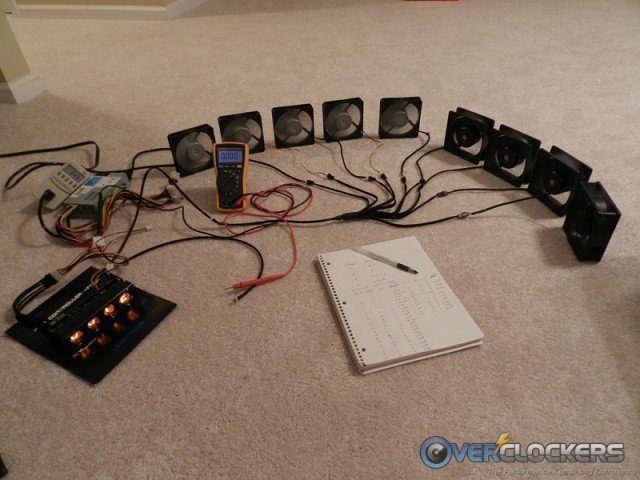 Looking at the remote, it’s fairly simple. The Open and Close buttons may seem odd since there’s nothing that physically opens or closes. These buttons turn the display on and off, and I’m guessing Lamptron didn’t want to label them as On and Off because then it would read like the buttons turn the entire controller on and off. The center M button (stands for Mode) switches between display modes C, V, and R (top right of the FC10) which stand for temperature, voltage and RPM. I’m not sure why the temperature display mode is labeled as C when it can be displayed in either Fahrenheit or Celsius, I think T would have been more appropriate. The double arrows << and >> are for channel selection, and the + and – are for increasing and decreasing the voltage in 1 V increments. 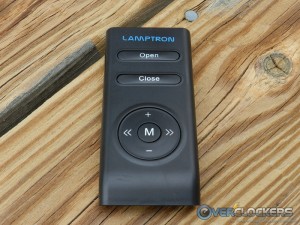 On to the most unique feature of the FC10, its display. Let’s go ahead and get the only bad point out of the way… The Nixie tubes on this sample are loose and wiggle around, which means they lose contact with the PCB sometimes and don’t display numbers properly. So, I had to mess with them to get pictures that had all the tubes working simultaneously.

Personally, I like the old, vintage, industrial look of the Nixie tubes and the orange glow that they give off (there are no color options for Nixie tubes). There’s also a depth to each number displayed within a Nixie tube since each tube holds ten cathodes lined up front (9) to back (0). So, if you had a 0 in one tube and a 9 in the adjacent tube, there would be a noticeable depth difference. You probably notice the light beneath the Nixie tube; it denotes which channel is currently selected. The light to the top right denotes the display modes mentioned earlier.

Here are the voltage and RPM display modes when I have a single 1850 RPM Gentle Typhoon connected to the fourth channel at 12 V.

The temperature sensors included with the FC10 are pretty accurate, especially in Celsius. There’s  a 0.4 °C and 1.5 °F difference between the readings on the FC10 and the Fluke 52 II.

The following chart shows the voltage drop as the channel load increases. The green line is just a reference for the 12 V rail when the PSU has the FC10 without fans plugged into it, which is 12.04 V. The red line line shows how the input voltage (12 V rail) changes as the fan controller is loaded. The blue line shows how the output voltage to the fans changes as more fans are added to the channel. So what we want to look at is the difference between the input voltage (red) and the output voltage (blue). 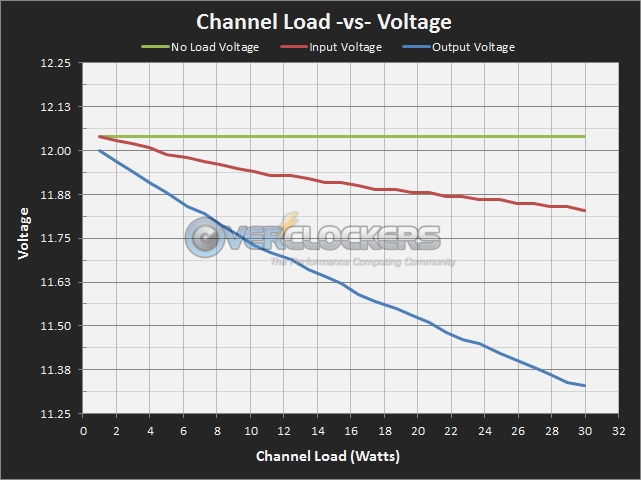 Here’s the hard data used to make the chart above, plus a couple more metrics calculated from the recorded data. The voltage drop varies from 0.04 V to 0.5 V as the channel’s load varies from 0.996 W to 29.94 W. So, with the channel loaded to 29.94 W the FC10 has a 0.5 V drop from 11.83 V, which gives us a maximum of 4.23% voltage drop. I also listed the voltage drop per Watt of channel load for each increment and it averages out to be 0.0245 V lost per Watt of load on the channel. Not bad at all while having so many fans on one channel. 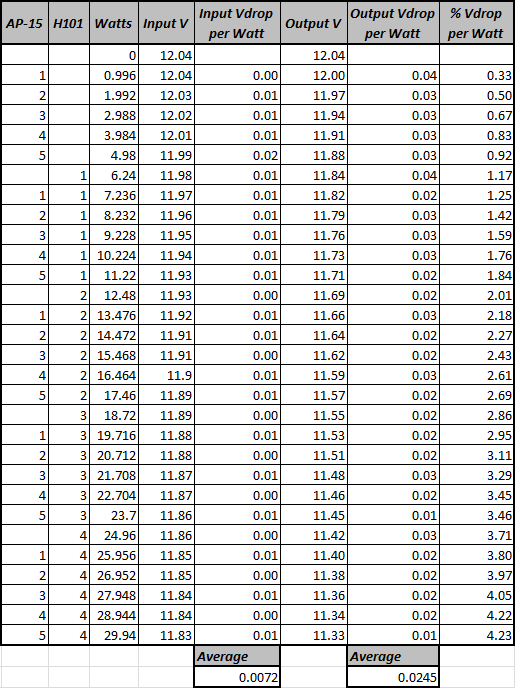 So, Lamptron has brought a very unique and powerful fan controller to the niche market of old industrial, “steam punk” themed PCs. For those that remember Nixie tubes from the mid 1950’s through the 1970’s, the FC10 brings a nostalgia that not many current products can match. The orange glow of the Nixie tube display may not be for everyone, but for those who like the vintage look, the FC10 is a welcome sight.

The performance of the FC10 lives up to the rest of Lamptron’s line up by easily handling 30 W on a single channel with only minimal voltage loss at max load. The temperature sensors work well and can display in either Fahrenheit or Celsius, although the majority of people will use Celsius.

There are a couple downsides about the FC10 for me. First, the Nixie tubes aren’t seated well and sometimes I need to wiggle them around to get all the cathodes to work, which leads me to believe they aren’t soldered to the PCB very well. Second, the remote is the only way to control the FC10, which means your ability to control your fans relies on a battery in the remote. This may not be a downside to some, but I’ve replaced my wireless mouse/keyboard with wired ones because of the batteries dying, forcing me to buy more (AA, AAA) or recharge them (Li-ion) which really annoyed me, and I fear the remote to the FC10 would make me feel the same way.

We brought the Nixie tube solder point issue to Lamptron’s attention, and they assured us that it will be forwarded the information over to quality controller since it is something that needs to be checked on all units.

An MSRP of $69.99  may seem steep for a fan controller, but considering the power of the channels and work involved to make the unique display, the MSRP seems fair to me. Lamptron also mentioned that they have been having issues with fulfilling production of the FC10 due to a lack in supply of Nixie tubes themselves. Therefore, there is very limited quantity available worldwide of this product. Overall, as long as the Nixie tubes are working, the FC10 is a great controller for people who love the old industrial theme and need to control many fans whether low or high wattage.