In a few years, the typical Sixpack box will probably be a little box, and sometimes maybe no box at all.

Take a look at a future for desktops. 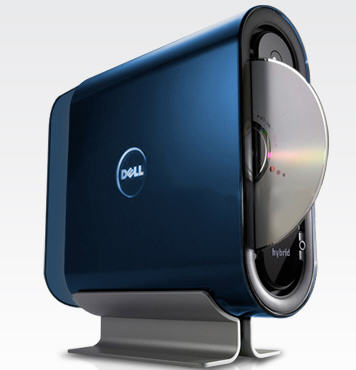 It’s the new Dell Hybrid. Maybe this picture might have a bigger impact after this picture: 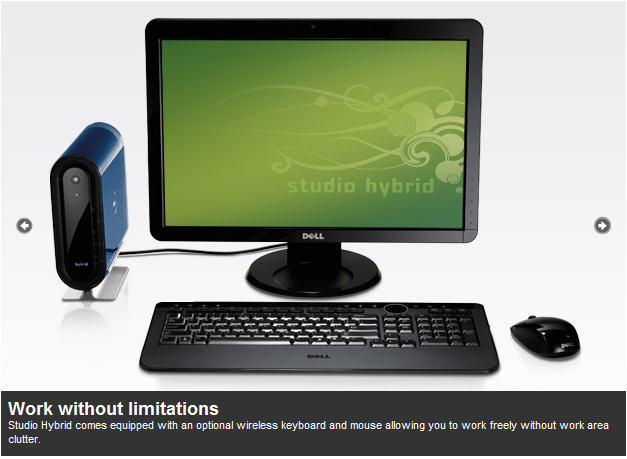 But then again, if a lot of people would rather have a small box than a big box, HP would suggest another future . . .

Indeed, HP’s touchscreen technology for its no-box suggests it would like to get rid of the mouse, too, and turn the PC into an ATM machine without cash.

None of the above is meant to suggest you run out and buy either of these machines, nor even buy one from one of your Sixpack friends (though they might mention it; the HPs are being advertised a lot by the retail electronics stores). Both machines are really laptops dragged to the desktop, with the limitations you might expect from such.

I do suggest, though, that these devices signal the beginning of the end of the big box as the default desktop standard. Might not be your standard, probably won’t be, at least as long as you want to use separate video cards or want to seriously overclock.

But within a few years, what may look a little strange and definitely unusual today will become mainstream, and the big box will be the one that will look at a little out of place, if not just old, to the average person.

About Ed Stroligo 95 Articles
Ed Stroligo was one of the founders of Overclockers.com in 1998. He wrote hundreds of editorials analyzing the tech industry and computer hardware. After 10+ years of contributing, Ed retired from writing in 2009.

I First met Humphrey Chen (in cyber-space) when Joe introduced us about a year ago. Joe said “He’s family”. With the exception of Ed and Skip, Joe’s never introduced anyone else to me in such an illustrious fashion. Since then,

Nehalem Bloomfields will rule the roost when they come out, but they aren’t going to be any bargain.

From Shaders to Shakespeare

Here’s a PR move that comes right out of Romeo and Juliet.