This is a tutorial on how to etch a printed circuit board. As long as we’re going through the steps, might as well make something useful, such as an Athlon XP diode reader. The first thing you have to have is a schematic. This is part of the MAXIM MAX6657 chip data sheet, available HERE. You should download and read this data sheet before starting this project. 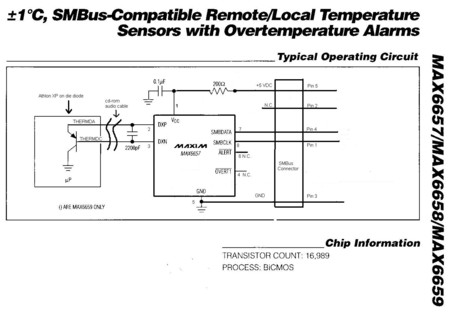 Next, you need to gather the components you will be using, so you can start to physically layout the board. Here are the parts we will be using, minus the Maxim MAX6657 chip. 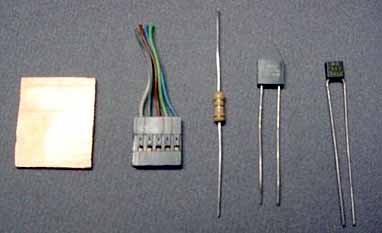 Now you get to play design engineer and layout the components on paper. Physically put the components on the paper, so you get a feel for their size. Move them around. When you get the layout you want, start trying to draw in the traces. If what you have doesn’t work, rearrange things. There are some rules to follow. In this case, you want to keep the .1 uf coupling capacitor as close to pin 1 (Vcc) of the chip as possible. This cuts down on noise. Also, it is a good idea to have as much gnd area as possible. Again for noise. Here is the layout I came up with. 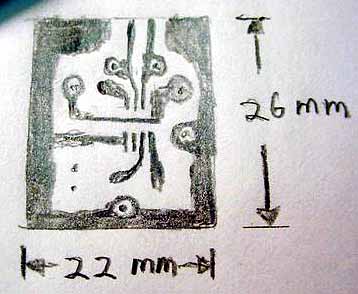 Notice the Ground Plane around the edge of the PCB. Now that you have an idea of the size of the Printed Circuit Board, it is time to cut it out from a larger piece. I just use either a hacksaw or coping saw. Then use a file to clean up the cuts. I ended up with a PCB of 22 mm by 26 mm. Here are the 3 boards I ended up with. 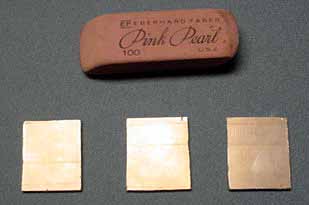 Now you have to transfer the holes for the components onto the Copper clad board so you can drill them. You need smaller drill bits than you can get at Home Depot, Lowes, etc. Harbor Freight has a carbide drill bit set that contains wire gauge sized drill bits. 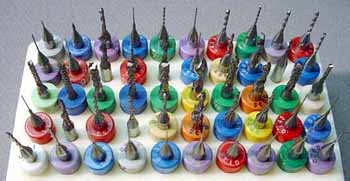 These have 1/8 inch shanks, so they work very nicely in a Dremel Tool. I also have a Drill Press setup for my Dremel tool. This makes it very handy to drill such small holes without breaking the bits. 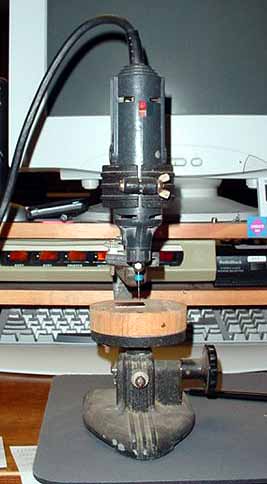 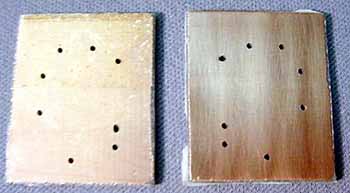 If you don’t have the equipment to drill such small holes, no worries. At the end of this article I discuss using surface mount components, so it is possible to make a Printed Circuit Board that doesn’t require drilling.
{mospagebreak}

Now you have your layout on paper done, and the boards are cut to size and drilled. Earlier you probably wondered what the eraser was for. Well now you take the eraser and use it to clean the tarnish off the copper on both sides of the board. Do this until the copper is nice and shiny. The etchant works better on clean copper.

Next you cover the copper on both sides of the board with masking tape. The cheaper and thinner masking tape actually works better here. Thinner tape works better than thicker tape. Take the flat end of your Exacto knife and burnish the masking tape so it makes very good contact with the copper. 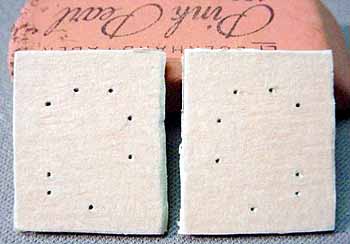 Now you need to draw the traces onto the masking tape with a mechanical pencil that uses .5 mm lead. You will be making a positive, as opposed to a negative. Where you want copper to remain (your traces) draw it in dark with the pencil. Where the copper is to be removed, retain the masking tape color. It should look something like this. 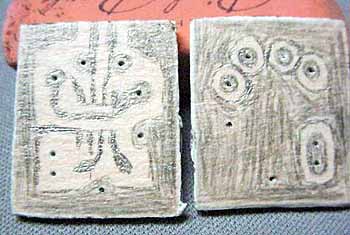 Now take an Exacto knife with a NEW number 11 blade, and cut out the masking tape that isn’t colored. You will be exposing the copper you want etched. The masking tape that remains will keep the etchant off the copper you want, and the unwanted copper will be exposed to the etchant and will be removed. This takes practice and patience. But the good thing is, if you mess up, remove the tape, put on more tape, and try again.

You have to cut on both sides of the area you want removed, and then use the point of the knife to lift up and peel the tape off. When you get to an area where the traces are small, such as the traces for the Maxim chip, use a back and forth motion with tiny strokes of the knife blade. Like the motion an electric knife makes. This helps keep from dragging the tape out of place. 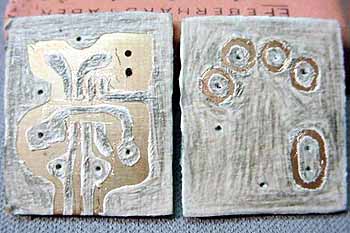 Radio Shack sells transfers for making traces, land areas, etc. There are also resist pens on the market. But for me, the good ol’ masking tape method works best. If this is your first project making a PCB, then I would suggest practicing cutting the masking tape on at least one or two trial boards before making the one to actually etch.

Now rock the smaller container in the hot water so the Etchant is in motion over the board. The faster you etch the board, the better. Less etching under the tape. The heat and etchant motion act as a catalyst to speed up the process. When the top side is etched, turn the board over and finish etching that side. It took about 3 to 5 minutes to etch this board. 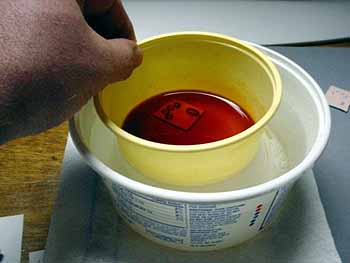 When the etching is complete, remove the board from the etchant, and place it in the water in the larger container. This will stop the etching. Inspect the board carefully. If there are any areas that need further etching, place the board back in the etchant until etching is completed. When you are completed etching, pour the used etchant in a sealed plastic container and dispose of properly.

Now take the masking tape off the traces. Clean up any problem areas with the Exacto knife. At this point the board should look like this. Notice the back of the board is almost all ground plane area, especially under the Maxim MAX6657 chip. This helps keep the noise from being induced into the circuit. There is a lot of EMI inside a computer case. 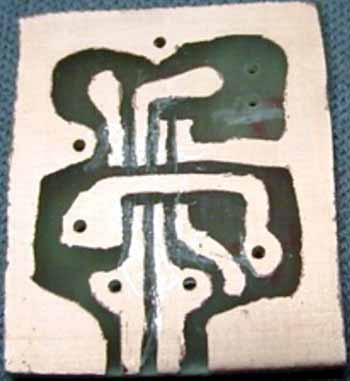 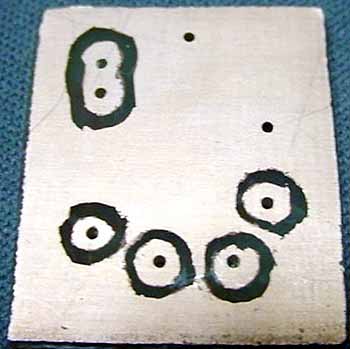 Now lightly tin all copper areas before starting to mount the components. Be sure to use a Rosin core solder meant for electronic equipment. After tinning, clean off the flux using a suitable solvent. The tinning prevents the copper from corroding and turning green and nasty. Should look like this. 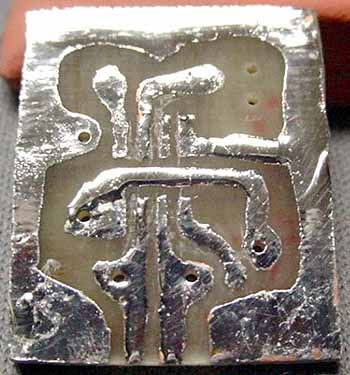 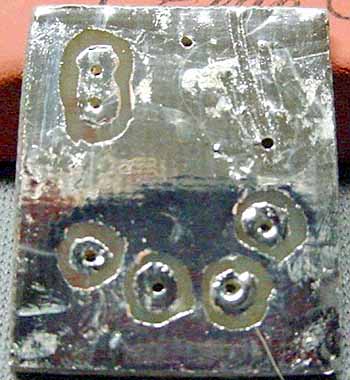 Wow, the picture sure shows where I missed with the tinning. I will have to go back and clean that up! Now you are ready to start mounting the components. I would suggest soldering the Maxim MAX6657 chip on first. It is the touchiest soldering and you need to do it without any other components in the way.

I used a sewing needle to prod the chip in place, than had a helper hold the chip in place by putting the needle on the top of the chip and applying light pressure. Then I soldered the first two pins on a diagonal. After that, it isn’t going anywhere. Actually, it wasn’t as hard to solder the chip in place as I thought it was going to be.

But you do need a soldering pencil with a tip that comes to a point. I have a Weller soldering station, which is expensive. But I saw a soldering pencil at Radio Shack for about US $10 that should work nicely. If you’ve gotten this far, and you laid out your own board, you don’t need me to tell you where the components go. After mounting the components, it should look like this. 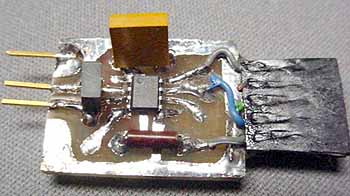 Notice on the left picture, the connector looks kind of melted. I was using solvent to clean up some flux for these photos. The solvent kind of did a number on the plastic of the connector. So, Duh, be careful using solvent around plastic. Still works though!

Notice I used epoxy to attach the SMBus connector, and I also coated the entire back of the PCB with epoxy. You will see in a later picture that there is very little clearance around the SMBus header on an IWILL board. So I used the epoxy to ensure that my board could not cause a short. First time I had reason to curse my IWILL. 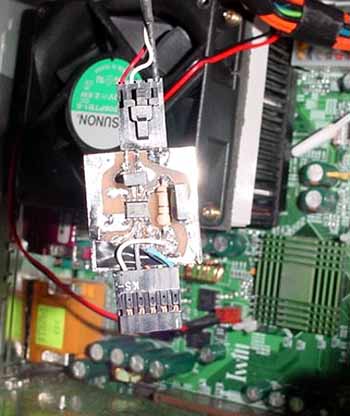 For my cable, I switched the White wire and the GND wire. Easier to layout the circuit board that way. Clip the connector off the other end of the CD-ROM audio cable. As per the schematic, solder the red and white wires to the THDA and THDC pins of the CPU connector on the back side of the Mother Board. DO NOT solder the Ground braid to the motherboard.

The Ground braid should be connected at one end ONLY, not both ends. This is discussed on page 8 of the Maxim MAX6657 data sheet. This setup when only one end of the ground braid is connected is called a Faraday Shield. 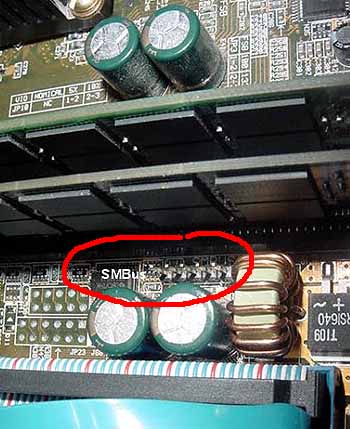 Here are my Mother Board Monitor 5 readings. Many, many thanks to Alexander van Kaam for his great work on MBM 5. If you use MBM 5 and haven’t made a small donation to Alexander, you should. At the upper right is the XP Diode reading. Lower right is the diode that is internal to the MAX6657.

CPU temps are actually hotter than the thermistor reports, NOT good. And the colder or hotter the temps get, the more the thermistor is off. Yeah, yeah, the core voltage is nominal, and the Clock frequency is just above nominal, but believe me, the way I type I don’t need an overclocked computer to write this article. THAT would be a waste!

Once you get the XP Diode reader working, you can go to Arctic Silver’s web site, where they have a procedure for calibrating your reader. Both of the readers I have built were less than 1 degree centigrade off, and the smallest offset available in MBM 5 is one degree. So, no sense in even bothering with it.

I haven’t been able to find single surface mount resistors yet, only multi resistor networks. But Digikey’s part number 200EBK is an eighth watt resistor that could be utilized as a surface mount by bending the leads as follows.

By utilizing surface mount, you could probably make the board smaller. Also, the only part of the PCB process that requires any kind of specialized equipment is the drilling process. With surface mount you could eliminate the drilling, and there would be no etching on the noncomponent side of the board.

Good luck if you should attempt etching a board. The ONLY hard part is mastering the cutting of the masking tape, and it just requires time and patience.