As you may be aware, most new Maxtor drives come with a set of sound reducing instructions. These instructions slow down the heads to lessen any noise they may make, at the cost of some preformance.

Maxtor has released a utility called AMSET to the public so that they can adjust or eliminate this feature. The included benchmarks show the price for silence.

You may notice that different versions of HD-tach were used. This is because my only excuse to run this little test of mine was the fact that DX8 fried my system and I had a chance to reformat. To use the AMSET and turn noise-reduction OFF, you must have your drive(s) hooked up to the built in IDE controller, and mine normally use the KT7 RAID controller.

Thus the following benchmarks are taken before and after with 2 – 7200rpm 15 gig Maxtor ATA-100 drives in Raid-0. Food for thought. 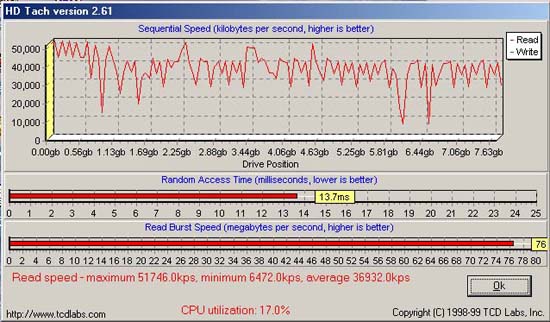 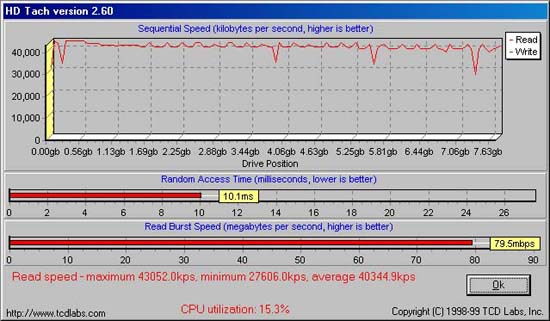 From Selling Crack To Selling Macs? . . .

The article says it all: Rap star 50 Cent: is entering the world of technology and is currently in negotiations with Apple’s CEO Steve Jobs to produce a line of affordable home computers to inner-city residents. This is bizarre. Since

I’ve been reading comments about the Best Buy Visiontek purchases. You’d never think it was just one chain of stores. Some people bought ahead of time went back for a pricematch, and not only got the pricematch, they ended up

Matrox announced its reentry into the gamers’ market yesterday with the Parhelia. Given Matrox’s vaporing (remember Glide wrappers for the G400?) and disappearing acts the last few years, I don’t know if I would want to name my new product