The International Society for the Protection of Computer Rodentia alerted me to Microsoft’s incredible foray into neutering these beloved creatures. By removing the male’s testicle, Microsoft is attempting to genetically alter the Computer Rodentia population. Utilizing its vast distribution network, Microsoft is flooding computer stores with these mutations in the hope that they will eradicate the common mouse. Incredibly, computer users, unaware of Microsoft’s devious attack on bio-diversity, are lauding this Mouse-Frankenstein creation for its superior qualities compared to its more common cousin.

In an attempt to better understand Microsoft’s diabolical plan, I secured one of the genus Intellimousus Explorus. This poor creature, mantled in its gray coat, peered at me longingly from its cleverly designed cage at COMP-USA. Little did I know, as I took it home and liberated it from its cage, that Microsoft so cleverly designed this gene-altered rodent that it can win over the most hardened souls.

Compared to its common cousin genus Serialmousus, Intellimousus is capable of receiving nourishment from two sources, the ubiquitous PS2 and USB teats found on all current maternal sources. All attempts to feed Intellimousus from the more common serial teat met with failure. In addition, Intellimousus requires the maternal source to ingest material placed into one of its orifices to enable all its capabilities to function; luckily, this task was easy to accomplish and must be done only once.

Once Intellimousus is connected to one of the maternal source’s teats and receives nourishment, it becomes very frisky and its eye glows. As the picture shows, Intellimousus makes its presence known quietly but most visibly. It also proved very nimble and light on its feet. 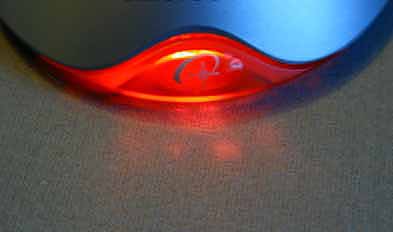 Microsoft has indeed bred Intellimousus with certain superior capabilities; most notably it does not need the constant grooming that Serialmousus requires. This is due to its lack of articulated functioning testicle. As such, it was observed that Intellimousus is able to perform its functions more ably and with more precision than Serialmousus. Symbiotically linked to Computerus Userus, it was found that Intellimousus was more pleasing to Userus’ hand than the more common Serialmousus. This was most notable when Userus was engaged with the maternal source in viewing and altering pictorial material.

In addition, the diabolically clever geneticists at Microsoft have bred Intellimousus with 5 tactile stimuli points – two similar in appearance and function to Serialmousus and an additional three. One stimulus point is shaped like a wheel, which functions quite nicely with the maternal source. The other two tactile points can be altered by Userus to function in many different ways with the maternal source. I found it most helpful when using the maternal source in its communications mode, allowing me to easily jump back and forth.

The clever jackals at Microsoft have indeed effectively widened their insidious invasion into Computerus Userus’ lair. Slowly but surely, these eunuchs will increasingly displace their poorer cousins. Some would view this as a Darwinian inevitability, but there will always be some who will stubbornly resist the siren song of this new species.


Just How Successful Is This?

With the apparent FXlop, those looking for a powerful but cheap video solution have been looking even more closely at these Radeon 9500 fixes, or will be. Someone wrote me on the subject: Hey Ed… quick note I thought may

Results from An Experiment

On the whole, I was very pleased by how this turned out, just by my own personal reaction from editing this. I really didn’t know much about these drives outside of their existence and thinking that maybe I wanted one,