Andy Lemont over at Millennium Thermal Solutions is close to launching his first entry into the heatsink market and it’s a beauty. He was kind enough to let me test out a pre-production sample, and if the production units are as good as this one, I think there is going to be a seismic event in this market. 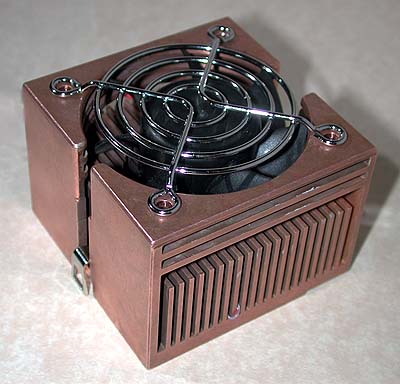 The Millenium in its final form – the fan guard in this pic is not bolted on.

We have seen, in the last couple of months, the emergence of the Delta 38 as the “performance” fan on many heatsinks. With the need to deliver super performance to cool the ever increasing Duron and T-Bird fires, almost all heatsink manufacturers have resorted to the “brute force” approach – more fan horsepower and more surface area. In most instances, this amounts to putting a 300 cubic inch hemi-head into a Volkswagen – goes like hell, but scary! With Delta 38s – NOISE!

More than a few folks have emailed me of their Delta 38 experience; after a day, in the trash can!

The Millenium, on the other hand, was designed from day one to deliver super performance without excessive noise. As you can see from the picture above, the Millenium is now an all-copper heatsink with an embedded fan. 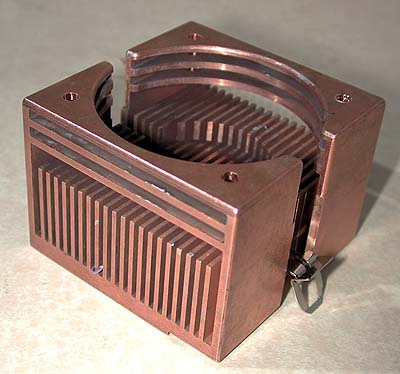 The pic above shows the heatsink without the fan. It sits inside the heatsink resulting in maximum airflow through the fins with reduced noise levels. The Millenium fan delivers about 29 cfm @ 5800 rpm. I’ll do some sound measurements, but the noise level was about the same as a YS Tech (26 cfm @ 4700 rpm).

Also, this is no light weight; it weighs in at 1 3/4 pounds (800 grams). I found the clip easy to mount on the socket with just my fingers, a nice surprise.

The Millenium had a thermocouple in its base above the CPU. The thermocouple is attached to an Omega HH23 Digital Thermometer. Ambient temps were measured with a thermocouple placed about 1 inch from the fan’s intake. I used Prime 95 to stress the CPU on three different motherboards:

The Duron is actually a more severe test as its area is less than the T-Bird, so there is a higher watt loading by area. Arctic Silver grease was used in all tests. 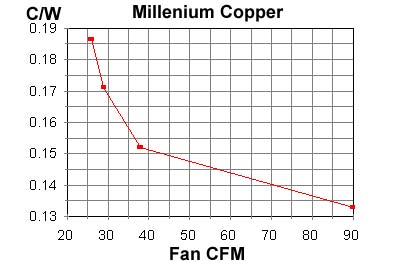 As the test shows, the Millenium turns in some impressive numbers, although the noise levels beyond Millenium’s 29 cfm fan start to get excessive. I bought a Radio Shack sound meter and measured sound levels 8″ from each fan’s intake. The dBA measured does not correspond to what you might see as published by the fan manufacturers – that’s not the intent. The YS Tech is not too noisy, so look at the scaling from it:

To my ears, the Millenium fan, although somewhat stronger than the YS Tech, does not sound louder.

C/Ws in the 0.15 range blur the distinction between water and air cooling – the Millenium is that good. I never thought I would see a viable air cooling solution at these C/Ws, and by “viable” I mean without excessive noise, size or expense. Pricing is not finalized, but I would bet that these units will retail someplace in the $35 range (my guess).

I have the same feeling with the Millenium that I had when I first found Alphas – revolutionary design and performance leading to a whole new era in air cooled heatsink performance, much to the benefit of consumers. If Millenium can deliver, it looks like a different ball game. Andy tells me that production units should be available in about a month. We’ll have another test when available – stay tuned!

Thanks again to Andy Lemont over at Millennium Thermal Solutions for letting me test out the latest version.

Andy needs your help! The Millenium Copper needs a name, so he is sponsoring a “Name Contest”. The best name for this heatsink wins a Millenium Copper signed by Andy Lemont. Drop me a line with your entry by March 22nd, and we’ll pick a winner. At Andy’s discreton, the name may or may not be used.

I want to thank all of you who took the time to submit names for my heatsink. I was blown away by the creativity and thought that people took to help me out. Picking four winners was really a challenge; I’ve also included a number of Honorable Mentions to share with you a sample of what I received. There were multiple names submitted, so the winners were the first submissions received. Congratulations to the winners!

A basic primer on some aspects of watercooling physics. — Mike Larsen