SUMMARY: I tested one of the first Glaciators off the line – Impressive performance at reasonable noise levels. 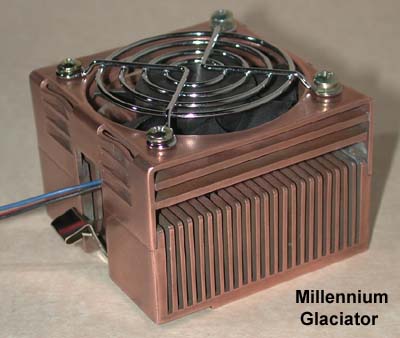 Millenium’s Glaciator has finally made it to production; as many of you know, Millenium Thermal Solutions came up with a heatsink design that featured great performance at low noise levels; we tested a pre-production unit HERE. Andy Lemont, the founder, has a number of fan patents, and this knowledge was used to great advantage in the Glaciator’s design.

The clip is a joy: Rated at 18 pounds, it has enough of a grip that you can easily mount and dismount at will. There should be no chip damaging issues with this one. The Glaciator tips the scales at 680 grams, or about 1 1/2 pounds. It measures 2 5/8″/68mm square by 2 1/4″/55mm high – a relatively compact package. The Glaciator will ship with a packet of Arctic Silver, which is a nice touch.

Construction differs from the pre-production model in that it is a two-piece heatsink – the top is fabbed separately and soldered to the base, which has 21 fins. A good solder bond is critical to performance, so QC will be critical.

I prepared the Millenium by boring a hole completely through the copper core so I could epoxy a thermocouple above the CPU. The thermocouple is attached to an Omega HH23 Digital Thermometer. Ambient temps were measured with a thermocouple placed about 1 inch from the fan’s intake. I used Prime 95 to stress the CPU on an Abit KT7, Iwill KK266 and Iwill BD133, running a T-Bird 1000 and 1133, a Duron 800 and a PIII 700. In addition, I tested on a static block. Arctic Silver grease was used in all tests.

Impressive numbers all around! What most impressed me were the overclocking results I achieved with the PIII 700. I have not been able to get this PIII much over 1000 MHz stable on air, so attaining 1071 (7×153) at temps bordering on chilly is impressive! While not specifically designed for socket 370 use, carefully measure clearances around the socket if you are considering it.

Looks like the bar is lowered again: Expect results on your motherboard at around 0.18 C/W to be on the safe side. Retailing for less than $40 and with lower noise levels than other high-performance heatsinks, the Glaciator is going to be a tough act to beat.

For those of you who have been asking for a high-performance heatsink that doesn’t sound like the Concorde, Millenium’s Glaciator right now stands alone.

Thanks again to Andy at Millenium for sending the Glaciator over to test out.

Make a silk purse out of a sow’s ear? Joe