Andy Lemont of Millennium Thermal Solutions is an interesting guy; he holds a number of patents on fans and has been kind enough to tutor me on heatsink testing methods. I think, as a result, we and some others are testing heatsinks more rigorously than before, to the benefit of folks looking for useful test data on planned cooling solutions. 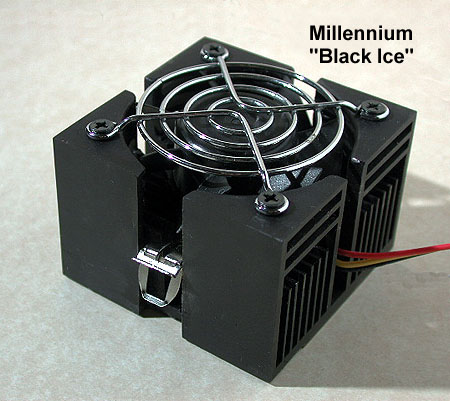 Now not all this is altruistic; Andy was initially motivated by seeing test results for his prototypes that were misleading – this due to the widespread use of socket thermistors to read CPU temps. We have shown conclusively (HERE
and
HERE) that this practice is misleading and Overclockers.com has adopted a more rigorous methodology as a result – Thanks Andy!

Andy is now close to launching his heatsink, the “Millennium Black Ice”, into the market. As you can see, it is one of the more interesting designs. It measures about 2 5/8 x 1 1/2 inches high; the fan is sunk into the heatsink, which seems to result in higher cooling efficiency than the usual bolt-on designs. The heatsink I tested had a YS TECH 27 cfm unit.

The unit I tested was an engineering prototype; the production version will feature 56% more surface area, with 20 fins across the bottom rather than what you see pictured above. This should result in better performance than what you’ll see below. Andy feels that the final version will deliver C/Ws of about 0.22 – if he can deliver, it will be a very competitive cooling solution.

A hole is drilled into the heatsink’s base above the CPU’s core and a thermocouple is epoxied inside the hole. Temps were measured with the Omega HH23 Digital Thermometer. Ambient temps were measured with a thermocouple placed about 1 inch from the fan’s intake. I used Prime 95 to stress the CPU on an ABIT KT7, running a Duron 800 @ 900, 1.92v, radiating 49.2 watts, Arctic Silver grease.

As tested, 0.34 C/W places it in the Alpha 6035 class – not bad for an early prototype. If Andy can deliver the performance he expects with the final unit, it will be competitive with the TAISOL CGK742092 – no mean feat!

Really too early to be definitive on Millennium’s Black Ice, but these results are promising. Soon as Andy sends us a production version (about 6 weeks), we’ll test again.

PS: I just saw on Andy’s site that he credited me for “invaluable design assistance “; this “assistance” usually took the form of “Andy, this clip is a piece of junk”. He’s just being nice – or maybe sarcastic!