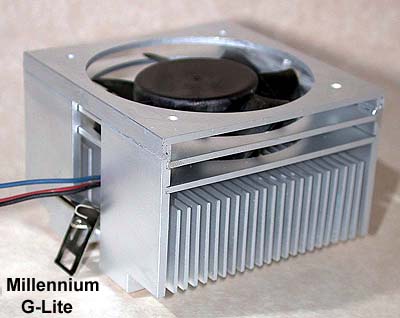 Millennium Thermal Solutions was nice enough to send over a sample of their light-weight aluminum version of the Glaciator called the G-Lite. This heatsink is targeted for the “performance OEM market”. Priced at about $22 retail¹ (and I would think a lot less in volume), it can be a very cost-effective cooling solution for noise sensitive users who are not aggressively pushing their systems to the max.

I measured the G-Lite’s fan noise at 55 dBA, 8″ from the fan’s intake, with a Radio Shack sound meter. A YS Tech 26 cfm fan comes in at around 62 dBA. Considering that the YS Tech puts out about 26 cfm and the AVC 29 cfm, careful engineering and attention to noise yields a heatsink with more cooling power at less noise – kudos to Andy Lemont on this feat!

Note also that there is no problem using motherboard fan headers – the AVC draws 2.9 watts which should not cause any problems.

The G-Lite consists of two parts: The base is an aluminum extrusion and the top rings are then pressed onto the base. The two bottom rings are fitted into grooves and the top piece then slips into side grooves to hold everything tight. The fan sits in a well machined out of the base.

Cooling is through 21 base fins 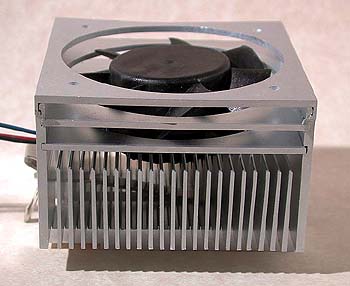 and the three rings in which the fan sits. Airflow is directed both at the fins and rings. 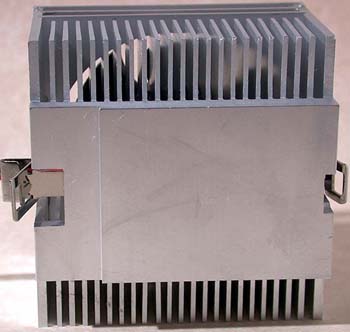 is very smooth; additional cooling air is directed down through the fins to the CPU carrier.

I prepared the G-Lite by boring a hole completely through the base so I could epoxy a thermocouple above the CPU. The thermocouple is attached to an Omega HH23 Digital Thermometer. Ambient temps were measured with a thermocouple placed about 1 inch from the fan’s intake. I used Prime 95 to stress the CPU on an Iwill KK266 & BD133 (MBM temps are on-die) and a Shutttle AK31. Arctic Silver grease was used in all tests. CPU Case Temp is the temp at that point where the CPU contacts the heatsink, CPU Back Temps are measured by a thermocouple on the center back of the CPU.

In addition, the G-Lite was tested on the Simulated CPU Die Tester at 77.5 watts. This is the “purest” test of a heatsink’s performance as extraneous factors, such as secondary heat path effects, are not included.

This is the first time I can remember when three different motherboards showed the same mobo temps – pure coincidence.

I tested the Glaciator II against the G-Lite and found the G-Lite about 7-10C warmer at 100 watts. If you are running a PIII at 25 watts, this means the G-Lite will be about 2-3C warmer than the Glaciator. Both are significantly quieter than competitive Delta 38/YS Tech 40 (or worse) heatsinks, and the G-Lite looks to deliver very good performance at noise levels not found in most other heatsinks.

The G-Lite is a good cooling solution with favorable noise levels; it’s competitive with more expensive and noisier heatsinks and as such, represents a very nice price/performance buy, especially for system integrators who are looking for more efficient relatively quiet cooling solutions for office environments.

The G-Lite is very easy to mount, light weight, low noise and a good performer – all told, a nice package.

The G-Lite is available from Cooling Gears. Thanks again to Andy Lemont at Millennium Thermal Solutions for sending the G-Lite our way.

¹Includes a packet of Arctic Silver.