A nice improvement to the original Glaciator. — Joe

SUMMARY: A good upgrade to the original Millennium. 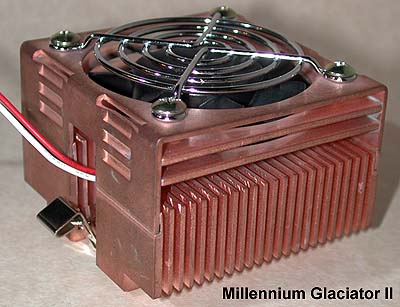 Millennium Thermal Solutions was nice enough to send over a sample of their latest version, the Glaciator II. Millennium has taken a whack at lightening the Glaciator and improving airflow by carving out the base: 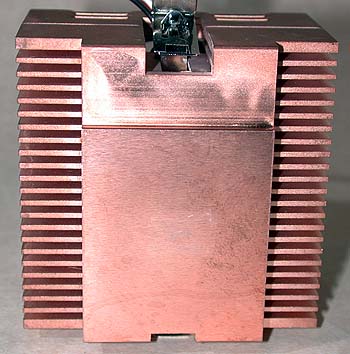 This allows cooling air to flow down onto the CPU, which does some additional cooling of both the CPU and in-socket thermistor.

The base is well finished and smooth to the touch. It is shipped with a protective plastic cover – make sure you remove it before use!

The clip is one of the best I have used – very easy to engage the socket’s lugs, no screwdriver required. 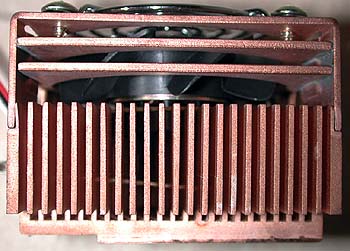 The fins in the bottom piece are cut from a solid copper block, so there is no solder joint. The top half is a separate assembly soldered onto the bottom. The annular rings in the top are soldered to the top cover. Note that there is a fair amount of space between the fins – airflow through the sink is important to its effectiveness.

The fan is mounted in a well – it is possible to remove it (not easily – it is glued in) and replace it with a Delta 38 if you’re so inclined, but don’t expect radical performance gains – maybe 2-3 C at best¹. You have to remove the Delta 38 from its case and fit it into the Glaciator body. Then you’ll have another noisy heatsink.

I prepared the Glaciator II by boring a hole completely through the base so I could epoxy a thermocouple above the CPU. The thermocouple is attached to an Omega HH23 Digital Thermometer. Ambient temps were measured with a thermocouple placed about 1 inch from the fan’s intake. I used Prime 95 to stress the CPU on an Iwill KK266+ and Iwill BD133/u (MBM temps are on-die). Arctic Silver grease was used in all tests. CPU Case Temp is the temp at that point where the CPU contacts the heatsink, CPU Back Temps are measured by a thermocouple on the center back of the CPU.

Fan noise was moderate – I measured it at 62 dBA 8″ from the fan intake with a Radio Shack sound meter – about the same as a 26 cfm YS Tech.

The Glaciator II was also tested on the CPU Die Simulator which gives results that are unaffected by motherboard influences.

I was particularly interested in the Celeron 1200 results; if you calculate C/Ws from the on-die temps, you get 0.40 for the PIII and 0.45 for the Celeron. It looks like the thermal interface between the cap and the heatsink cost about 2 C in performance².

Finally, I did a head-to-head test with an original Glaciator on the CPU Simulator with these results:

Looks like Millenium did their homework – there is a noticeable improvement over the original design; depending on the motherboard and case airflow, you may see improvements in the low single-digits.

¹The latest batch of performance heatsinks are all banging up against a performance barrier – you can only go so far with current technology. The difference among the top performers is not more than 3-4 C.

Thanks again to Millennium Thermal Solutions for sending us the Glaciator II.

See Page 2 for a look inside… SUMMARY: A very clever design resulting in good performance in a small package; don’t even think about using it for high heat CPUs unless the fan delivers more than 30 cfm, however. A