The good guys at Mitron were nice enough to send us a sample of their watercooling gear which includes a waterblock, radiator and reservoir – fan and waterpump are not included. 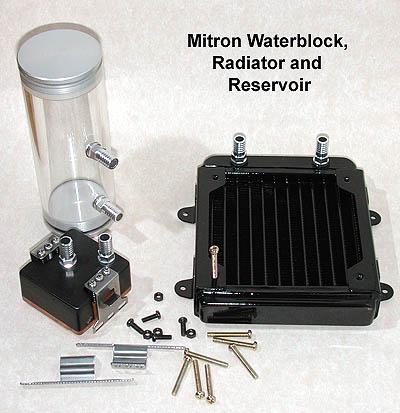 The waterblock is a snap to mount – it uses two spring loaded bolts on each side; the center screw is used to lower the clips to engage the socket’s lugs (note all three are used) and as you back off the screw, the springs pull the waterblock to socket. Once the center screw clears the clip, it’s done – simple and effective. Mounts are included for P4 and Socket A.

The radiator includes bolts for mounting two 120 mm fans to it (push-pull) and securing it to the case. It is definitely on the smaller side and will most likely compromise performance to some degree.

The reservoir is acrylic and nicely made – the top screws in. In use, however, I did find that water in the reservoir formed a whirlpool, such that air bubbles might be formed due to the intense swirling action (probably intensified by its cylindrical shape). I filled it to the top and it mitigated the problem.

The base is copper and appears agreeably flat: 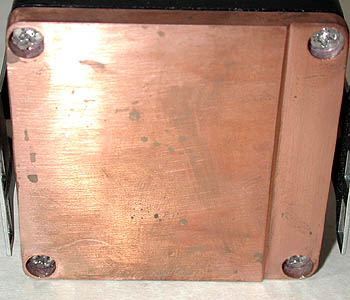 I could feel no machining marks on it.

As there is no pump or fan included, I decided to test these components using a 120 mm ADDA fan. As the waterpump is a critical determining factor in performance, I tested the three components while varying the flow rate to develop a performance range – in this case, from 0.45 to 1.01 gpm. This is indicative of what to expect with the usual range of mag drive pumps used in watercooling setups (go HERE for some examples.)

The Mitron was tested on the CPU Die Simulator which gives results that are unaffected by motherboard influences. 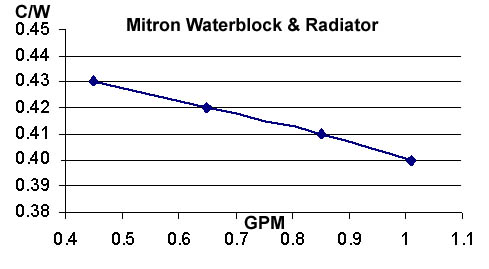 The Hydor comes out marginally better as its flow is slightly higher than the Eheim’s. Both pumps are probably delivering something like 1.1 to 1.2 gpm (some Eheim examples HERE.)

All other things equal, two critical determinants of a watercooling system’s performance will be the pump’s flow rate and the size of the radiator. As there is no waterpump included with these components, performance at 60 gph is indicative of what to expect. The radiator is clearly on the small side and while handy to mount in a case, it does take a toll on expected performance.

Mitron’s waterblock, radiator and reservoir can form the base of a moderately effective watercooling system.

Thanks again to Mitron for sending these products our way.