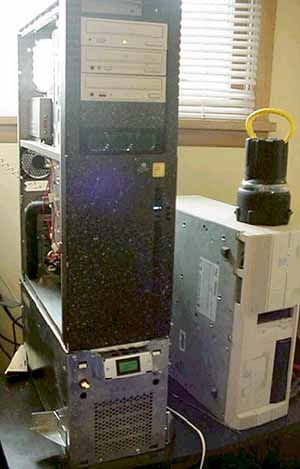 Front view. I did the paint job on the case myself. It also has a plexiglass window on the side and blue hard drive and power LEDs.

While working at a computer store, I acquired a Kryotech SuperG Athlon 1000 machine. Supposedly it had problems, but when I took it home and hooked it up, it worked fine. I used the machine for about 4 months and then it started having problems.

After running for just a few minutes the temp monitor on the front would indicate that the CPU was heating up; a few minutes later, it would shut off completely and read TOO HOT. Well, I did everything I could think of to fix it but eventually decided that

I gave up and it sat around for a while. Just recently I decided to put it to use. I was currently running a P3 450 which I knew could go up to 600MHz with the right cooling. I proceeded to take apart the ‘Kryo Cavity’ that held the Athlon CPU against the cooling exchanger.

I found that the CPU was covered in some sort on non-conductive gel that protected it from condensation. I stripped it all down until the exchanger block was showing. I then took my P3 CPU and removed the plastic casing from it. Concerned about any moisture that might form between the block and the CPU, I cut out a piece of fabric that fit between the block and the CPU card, leaving a cutout in the center for the CPU die to fit through.

Then using some zip ties (the next best handyman tool to duct tape), I zipp-tied the CPU to the block, making sure that it was snug. OH, by the way – I did not like that dinky case that came with the Kryotech unit. It had only room for a couple of hard drives at most and only 3 5 ¼” bays. I wanted more to fix 3 drives and a couple of CD-ROMs as well as my burner.

So I unbolted it from the bottom refrigeration unit. I then took my Inwin Q500 case, drilled the necessary holes for the bolts and cut out a spot for cooling hose. Once this was all done, I bolted it up to the fridge unit, connected the appropriate wires and plugged in the CPU.

“Alright, this is it.” I thought and turned it on.

The fridge started up and began cooling. It has to get to -49 degrees Celsius before it turns on the system itself. Once it got to the right temp it fired right up. I got into BIOS and set the FSB to 133 MHz with the multiplier fixed at 4.5x. I rebooted – it posted at 600 MHz and booted into Windows XP no problem!

I ran 3D Mark 2001 in a loop for about 5 minutes, watching the temp readout on the fridge and making sure it didn’t lock up. It ran perfectly.

View of the backside of the processor, covered in frost.

Then I looked at the CPU and to my surprise noticed a layer of frost forming on the backside as well as on the exchange block! I figured this couldn’t be good and shut it down. I tried to think of what I could do to prevent the frost and could come to no answer.

I couldn’t fully encase the P3 similar to the Athlon because the power regulation capacitors on the mobo got in the way. The biggest problem I could see was that when the frost stared melting, it ran down the CPU and dripped onto my GeForce.

So I cut up some more fabric and placed a piece on top of the video card to absorb any water. With that, I fired it back up and launched the Burn CPU utility, which is designed to fully load the CPU and stress test it. I let it run for about 20 minutes and it never locked up. 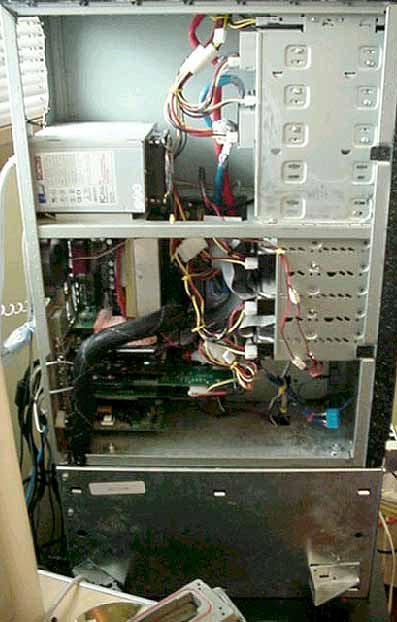 Side view of the monster.

I’ve been running the machine for three days now – it’s only locked up once and it seems that the frost buildup isn’t posing a great danger in shorting out the CPU as I thought it might. I guess the resistance through the water is too high for the 2.0 volts in the CPU to pass through.

I would still like to find a way to eliminate the frost altogether though. If anyone has any suggestions or questions about this project, feel free to email me.

A little while back, we asked members of the audience to relay their experiences, about a particular product. We rather liked what we got, so now we’re going to expand this a bit. This time around, we’re going to ask Read More

Introduction/Background This article will show the owners of Pentium M / Celeron M laptops how to optimize the power management features to get more battery life, less noise and less heat output from your trusty laptop. I will be optimizing Read More

XBitLabs recently reviewed the upcoming low-end Penryn quad Q9300. They spent more than a bit of time trying to overclock it, and found that they were rather constrained by the chip’s low (7.5X) multiplier and high (333MHz) FSB. Faced with Read More