Today’s computer systems have come a long way from the meager machines of the 80’s. Processors themselves are almost a thousand times faster. With this comes another increase: Power Requirements.

It was not uncommon for an old 808x system to run off of a 95 Watt PSU. Today’s computers are using at least 300 Watts and for some duallies 400 and up. While the CPU is the most obvious source of power consumption there is one other device in your system that can get greedy quick. RAM. More specifically, slots loaded with the latest, greatest, and fastest DDR you can get, or what your board says it will support.

Take a look at some of today’s motherboards:

Most all of the boards only support 4 DIMMs when using registered memory and then only up to DDR266 and 3.5 GB. Why?

Simple: It’s the power, or rather, the lack thereof provided by the motherboard.

Faster DIMMs require more current as do larger capacity DIMMs (such as 1GB or 512MB modules). How much current? It depends on how the module is made (configuration), whose chips are on it (type) and how fast it is (speed).

Take for instance a 256MB DDR DIMM. This DIMM can be made in one of several ways. It can have 8 256×8 chips or 16 128×4 chips. It could also be made of 4 512X16 chips. Remember there are 8 bits to a Byte. RAM chips are measured in megabits. Also remember that a DIMM is 64 bits wide. You can have any configuration that gives the desired capacity and is 64 bits wide.

There are several current ratings as set forth by the JEDEC standards for DDR. As a matter of fact there are 13 of them. (Manufactures can, and do, add and subtract parameters at their discretion). We will concentrate on IDD7 which is “Operating current: 4 Bank interleaving reads with one bank active,” and IDD5 “Auto Refresh Current”, as these are what determine how much current the RAM needs.

Wheww!! That’s a lot of info. Let’s break it down a bit. We’ll concentrate on Samsung and Infineon as we have a good data sample on their modules:

I have removed the 128 Mbit parts, as they are made on a different process which will throw things off: 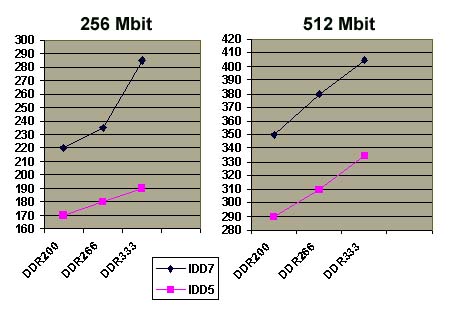 IDD5 is generally a linear increase with speed. However, IDD7 is not. This makes it difficult to predict the current needs of a DDR400 part. However, it is obvious that a DDR400 part is going take a considerable amount more current to run.

The Samsung is a whole different story:

Samsung has different specs for different configurations of the same size RAM. If you do the math, you’ll find that you want modules using the 512Mx16 parts. Even though that part takes more current than the others, they need fewer chips than x4 or x8 configurations. A x4 configuration takes almost twice as much current as a x16 configuration. (Thanks Chad!)

Want to overclock your RAM some? How about 2.7 Volts? (Which is within JEDEC specs for DDR.) Now you need 24.6 Watts. That’s already more than a Celeron 366 needed. Also, think of the heat generated by this kind of current. Those heat spreaders suddenly make much more sense.

Infineon now makes a 2GB DDR module. It requires 8.1 Amps @ DDR266. You won’t be running these in today’s Athlon boards. There just isn’t enough current to drive all that RAM. You might be able to get a maximum of 30 Watts from the 5V rail that runs the DDR.

Why does registered RAM make a difference? Even if your board can supply enough current to the modules, the address lines and control lines can’t. That’s why many boards specify the use of Registered DDR when using 4 modules.

Registered RAM modules have a buffer on the address and control lines. They also have a clock driver chip. These chips re-drive the weak input signals to all of the memory cells; something the outputs from the chipset/CPU can’t do. This is called fanout. When you have 4 modules, those signals have to go to many places. Without buffers, by the time they got to each RAM module, the signals would be much too weak for the RAM to discern.

Now, why can that Shuttle board support 4 DDR333/400 modules and the others can’t? It has an extra power connector:

Near the top right of the DIMM slots is a simple Molex Drive connector. This, and the proximity of the ATX and ATX12V connector to the RAM, let the regulators have the power they need to supply the RAM. Remember – the ATX connector only has four 5V Rails. Each one can drive around 6 A (120 Watts total) of current.

This current also needs to be shared with the CPU and other components. Also, notice that Shuttle says COMPLIANT modules, of which any of the high current chips are not on the list. Obviously, what keeps these boards from running all that RAM is the power requirements and large fan-out of control signals.

Motherboard manufacturers are combating this problem. The ATX 12V connector provides 2 additional 12 V rails to the motherboard. These will be used for the CPU VRMs (VRM 9.0 spec) and other high current needs, freeing up the 5 Volt rails for other applications. All is not lost; it’s just a bit slow in the coming.

DDRII is also just around the corner. It will help the power situation out even more since it needs only 1.8 Volts. That’s around a 25% savings over the 2.5 V required by DDR. Memory manufactures are also constantly working to shrink the process size which also shrinks power consumption.

Increased speed and capacity lead to more power needs. This is nothing unusual or surprising; just not something people think about when they upgrade their RAM. Do I have enough power? Well, Do you?

I am frequently in the Overclockers.com Forums under the “nick hooziewhatsit”. John may be there occasionally under “one800tnt” as well, if you have any questions.

G.Skill just announced the new Trident Z5 NEO and Flare X5 series DDR5 RAM. Both series have been engineered specifically with AM5 compatibility for peak out-of-the-box performance when paired with an AMD Ryzen 7000 series CPU. Utilizing AMD’s new EXPO technology, you can push your system further than previous generations keeping simplicity at the forefront. Both models will be offered in 2 x 16 GB and 2x 32 GB kits with base frequencies of 5600 MHz and 6000 MHz. Availability is expected in September of this year, though pricing is not yet released.