How Steve got into watercooling — Steve Wagner

A 486DX was top-of-the-line when I got into computers; it was the only store bought that I have owned. After upgrading it as far as it could go, I built my first computer. It was a Pentium 100 then upgraded it little by little all the way to a Pentium 233MMX and thats when the better half said enough is enough.

Years later, minus the better half, I decided that food and rent were greatly overrated and it was time to upgrade again.

I spent days going through various websites bringing myself back up to speed. That’s where I came across watercooling, something I had never heard of this before. I spent a week reading up on waterblocks, pumps and cooling methods, then decided that I had to give this a try.

My basic system started off with a Dragon 7 Plus motherboard, an AMD 1800+, a Western Digital 40 Gb hd, 256Mb DDR, an LS-120 Floppy, Pioneer Dvd, CD Burner, Digital Doc 5 to watch over it and a very expensive cheap case to put it all in. 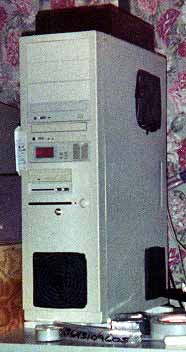 I call it an expensive cheap case because this no-name full tower was nothing but a headache. Nothing fit right. The drive mounting holes were off, the case had too many screws to remove to be able to make any mods to it, then after cutting it up to put the fans in ( 8 80mm and 2 120mm ), I found out that the power supply was bad. Spent more on a new Enermax power supply than I did for the entire case.

At first I was planning on using a 330 gph aquarium reservoir pump that I had laying around. Then I got worried that the small hoses would restrict flow too much as it was a volume pump, not a pressure pump. So I ordered a Eheim 1048 from DangerDen.com

The Innovatek Waterblock was my next choice because of its clamp. I had read too many stories about mounting lugs being broke off, and several sites thought this block worth extra. Its only drawback is that you have to use 5/16 ID hose. 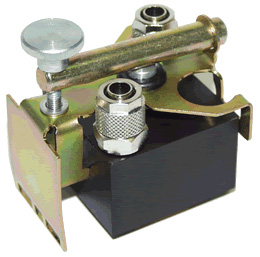 I went to my local autoparts dealer and got a heater core for a ’68 Mustang for $17. I cut a hole in the top of the case, sealed the core to the top and built a shroud that housed 6-80mm fans that pulled air thru the case then thru the core. You can see the tubes sticking down thru the top on the left top of the picture (my thumb wanted to be famous, and said it would go on strike if I didn’t include it in the picture). 🙂 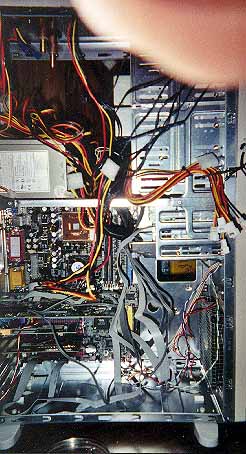 I took a 4 gallon Rubbermaid tub and installed return line fitting in the side about two inches down from the top of the tub.

I then took a McDonalds shake straw and glued it to the inside of the return line fitting.

I burned small holes down the sides and then sealed off the end of the straw. I did this because I thought air should be able to cool several small streams better than one large one.

Next, I put the water/pump supply line as low as I could in the side of the tub then sat the tub on a platform so the tub and my heater core would be at the same height.

Placing the Eheim directly below my tub, I hooked it up inline because I wanted to pull the water from the very bottom of the tub since cold goes to the bottom and that gravity would feed water into the pump.

The pump had to pump water up at most a foot from the waterblock up to the heater core.

It didn’t take long to see that this setup didn’t cool water fast enough to keep up with the CPU, so it was time to junk this idea and try something else.{mospagebreak}

I decided to try the fridge cube that was featured on your site. 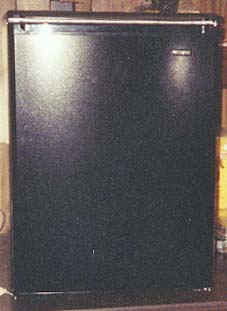 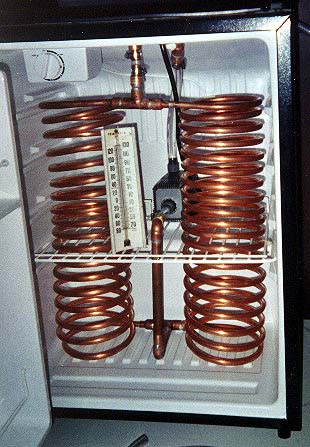 Here is my version:

I used 25 feet of 3/8 ID per coil and 1/2 ID copper for the inlet and outlet. The fridge was new at $125 (looked everwhere for one used and the only used ones that I could find was on E-Bay but by the time I paid shipping, it just wasn’t worth it.

This fridge had a top cover on it that could be removed. I was able to hide all my pipes and wires underneath it so from the front it looked normal. It was a little over four cubic feet, and could chill down to -21F.

It didn’t work out. Let me explain why.

What happened was the water would be at room temperture in less than five minutes. The fridge couldn’t cool four gallons of room temperture water from the reservoir fast enough to keep up. Plus, the heater core was heating up the water due to the heat from the case being pulled thru it.

Time to repipe and reroute it all. Do away with the reservior, the heater core and go with a closed loop system.

This did better, but still wouldn’t keep up. Within a hour, the temps were at room temp and would just keep rising.{mospagebreak}

When I first started planning my water cooling options, I liked the water tower ideas but wanted more of a reservior. I thought about it for awhile and this is what I came up with.

I’m very happy to say that this works better than I had hoped. With a room temperture of 80’F degrees the tank temperture stays around 60’F degrees.

You can see that I had to use two different pumps, the Eheim 1048 to circulate water thru the computer and return it to the tank through the middle tower.

I did this so I could see immediately if the water was running (I plan to put in a switch for auto shutdown just to be safe.)

The second pump is a little giant 660 gph that has a head pressure up to 12 feet. The two side towers are 4″ thin wall drain pipe (this cuts down on the weight plus the fittings are a lot cheaper). The tank is a 10 gallon that Walmart sells for $8.

The towers are 4′ from the fittings up with 3/4 copper pipe from the little giant pump into a 3/4 tee then reduced to 1/2 to the shower heads.

To mount the fans, I used cleanout adapters and ground out the threads so I could fit 80mm fans on the inside. Both towers have fine screenwire just below the top openings to keep the mist down. Since the water level is kept below the bottom of the tower, the fans push air not only in the towers but the tank as well because the 1/4 acrylic top is sealed. You can feel air being pushed back up thru the center tower which has no fan on it.

I should also mention that the tower bottoms have screenwire to cut back on the noise.

My CPU temp stays right around 76’F to 80’F degrees. I use distilled water and the water loss is around a quart a day.

Have to say that it has been a learning experience but loved doing it all.

Any questions that you may have I will try to answer them at the email address below.