SUMMARY: Motherboard Monitor is one those utilities that you can not do without. “Shutdown” and “CPU Heat Up” are two fail-safe features that are no-brainers.

Aside from its monitoring capabilities, Motherboard Monitor has fail-safe functions that can save your CPU from frying due to a fan, voltage or peltier failure. I reviewed “CPU Heat Up” a while ago and recently discovered “Shutdown”. Gabe over at Swiftech alerted me to it and, to my chagrin, it has been staring me in the face all this time.

A lot of us leave our systems unattended for long periods of time. I use Waterfall all the time and so if a fan were to fail while I’m not around, no big deal – the CPU is powered down anyway and putting out virtually no heat. But others are running SETI or other unattended programs and a similar failure might fry the CPU. For peltier users, a fan failure could be fatal.

Well there is a tab in Motherboard Monitor labelled “SHDN!“. When you click on it, it will not be enabled because you have to download Shutdown to make it work. 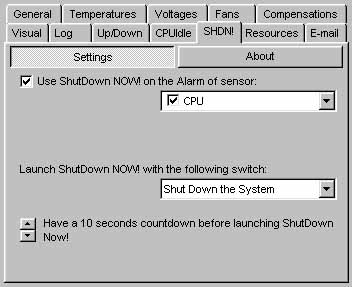 As the pic above shows, what Shutdown does is exactly that – should an alarm be triggered by any preset event (fan, temp etc), Motherboard Monitor will open Shutdown and it will shut the system down. Shutdown itself has a number of options that look interesting and, although I have not played with it, I’m sure its robustness will be appreciated.

When you first download Shutdown and install it, you have to reboot to get Motherboard Monitor to recognize it. I tested it by pulling off the CPU fan wire – with Waterfall running, there was no real danger of the CPU overheating. Worked like a charm.

You don’t have to be a “power user” to use this feature – anyone who wants extra protection should use this one – a true no-brainer.

If you are using or plan to use a peltier as part of your cooling solution, you must know that condensation is the number one issue you must effectively neutralize. Water and silicon do not mix and more than one person has experienced its deleterious effects.

Dealing with condensation from a mechanical perspective concentrates on insulation and isolation of cold components from contact with the air. This is an important and necessary element when installing a peltier system. However, air infiltration is insidious and you can never be too sure when it comes to controlling peltiers. Now with “CPU Heat Up” as part of MotherBoard Monitor, we have what I think is an incredibly effective tool to add to the peltier kit bag.

After installing MotherBoard Monitor 4.11, click on the “General” tab, go to “Preferences,” then “Visible Tabs.” Once there you must click the “CPU Heat Up” box to enable this tab. You will then see “CPU Heat Up” as an additional tab. Selecting it, you then must select which sensors will activate “CPU Heat Up.” If you don’t have a sensor on the CPU, I would strongly advise not using this feature – it really is best used with a direct CPU sensor.

With some testing, I’m sure that MotherBoard Monitor 4.11 will be an essential addition to your system. I have not covered its other features, but if you don’t have this on your system, you are missing one of the best system reporting tools available. In fact it is so widely appreciated that a number of motherboard manufacturers will include it as part of their setup CD. High praise indeed.

Here’s a LINK worth a quick read – the upshot is W7 ouperforms Vista but XP better for less powerful PCs.

For years, we have measured video cards by how many frames per second they could put out in various games. It was a good measurement. You want to play a game, not Keystone Kops, especially when the cops are trying

Protect Your Laptop From Theft

Laptops are great portable devices – problem is that are also easy targets for thieves and all too easy to steal.