I decided to buy a T-Bird 1133 because of its high power output – just the thing to test heatsinks and watercoolers. Ed bought one, and after seeing how well it hit the low 1400s, I decided it was time to upgrade the cooling test bed.

Anyhow, running at 1425 MHz and 1.9 volts gives me 86.2 watts of heat from the CPU – not trivial! I ran this with a Danger Den Cooling Cube, Be Cooling waterblock (drilled for thermocouple in the base) and Danner 1.5 submersible pump with the following results:

Great results, but what did interest me was the Motherboard Monitor (MBM) reading: 44 C. What it indicated was a high temp on the secondary heatpath. I felt around on the motherboard and immediately realized that the 6 power transistors were on the warm side, so I placed a thermocouple on them:

If you feel along the socket periphery, you will notice that it is warm also. What’s happening here is that the heat from the power transistors migrates to the socket, placing an additional cooling burden on the CPU.

The point here is that as we start to push CPUs well beyond 1 GHz, think very seriously about using active cooling on your motherboard’s power transistors. I did this on the Iwill KK266, and have added a fan to the heatsink I placed over the power transistors (pic below). 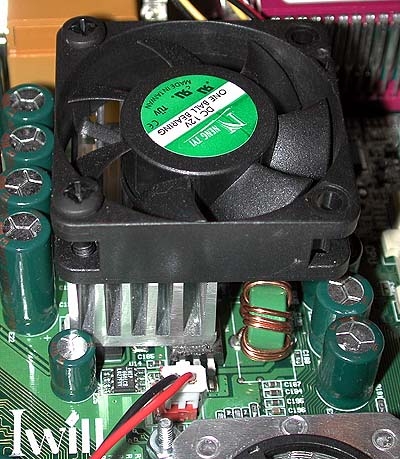 Note that the fan overhangs the heatsink and is held on by two screws. I made the heatsink by cutting an old one to fit. The six power transistors all lie in a row, so one heatsink over all of them is a good approach. I used thermal epoxy to glue the heatsink on – it’s a permanent hack!

The ABIT KT7 and KT7A has the same layout, so this can be used on it. ASUS uses a power riser, so if you want to actively cool it, it’s going to be more demanding.

SUMMARY: KT133A boards make FSB overclocking a real option; Iwill’s KK266 outperforms ABIT’s KT7A by a significant margin at reasonable SDRAM voltages. PC Nut was kind enough to send me a KT7A with RAID to test out, complete with a