How I moved some motherboard capacitors – Joe

SUMMARY: How to mount large heatsinks where they’re not designed to go.

What follows is NOT recommended for general use. If you try this, you may kill your motherboard. 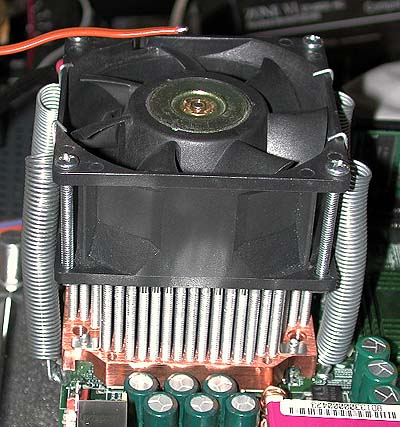 The brown wire is a thermocouple used to measure ambient temps.

What you see above is the Swiftech MC462A on an Iwill BD133 – this is a PIII motherboard. The Swiftech is designed for use on Socket A boards that have four nice little holes around the socket, NOT for PIII use. This is cooling overkill, so why did I do this?

I like to test heatsinks on as many platforms as possible, so I thought it would be nice to rig a way to test large heatsinks like the Swiftech and Alpha 8045 on a PIII board. The advantage is using Intel’s on-die diode for comparative testing. The problems were twofold:

I had Iwill’s BD133 which was superseded by the BD133u, and I looked at it as the candidate for some serious mods. 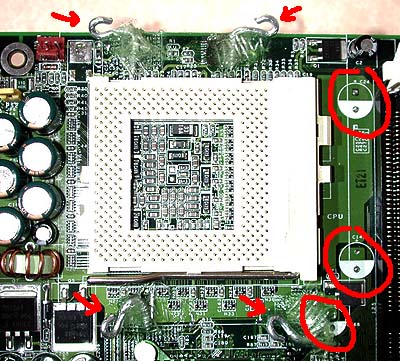 Now, when I say they have to go, I mean they must be moved. After some thought, I decided to get them completely out of the way by moving them to the back of the motherboard. Moving a capacitor could be done with careful desoldering – a pain (at least for me).

I have a 100 watt soldering iron and couldn’t find it, so I elected the brute force method. I pushed each capacitor around a bit with my fingers to loosen them up, then grabbed the top with a pliers and yanked it off (collective gasp by many EEs).

Now ordinarily I wouldn’t do this, but after ripping off a capacitor by accident on my ABIT BX6-2, I knew this was one approach. Do I recommend it? NO WAY! But I’m telling you what I DID, not how BEST to do it.

When you pull the caps off, what’s left are some stubs – I clipped these off and then proceeded to solder replacements on the motherboard’s back. I had a 1000 uf, 35 volt, cap left over from my other repair and used that to replace the 1000 uf part. I went to Radio Shack but there were no 1500 uf parts.

I then bought two 1000 and two 470 uf, 16 v, caps and hooked them up in parallel (thanks to all who responded to my question) to give me 1470 uf – close enough for my purposes. The board’s back now looks like this: 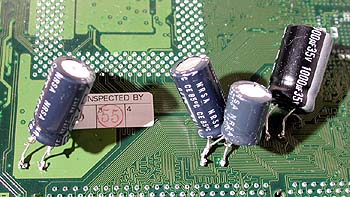 Now there is a problem here – if you were to do this in a case, you have to cut the motherboard tray so these fit. I use test motherboards without a case, so all I had to do was raise the board up enough so the capacitors clear – I used a foam block.

I measured four points equidistant from the CPU core and far enough away from the socket to clear the base. I then bent them so that they did not contact the base and epoxied them onto the motherboard, being very careful to make sure the metal eyelets did not short out anything.

I first laid down some 5 minute epoxy and let it get tacky. I then positioned the eyelets on the board and let the epoxy harden. I then laid down some more epoxy and fiberglass cloth on the shanks to anchor them firmly to the board.

I altered the springs so that they have have little hooks in them to slip into the eyelets and onto the fan body. I found this to be the easiest way to hold the heatsink in place (I used the same technique for the CPU Die Simulator).

This works fine for my purposes because the motherboard lies flat when I’m testing. I don’t think this will work at all for a board mounted in a case (gravity working against you). Also note that I used Radio Shack parts that were not as good as the original – the RS caps were spec’d at 85C while the original parts were 105C. Replacing parts with the same specs or better is highly recommended.

After I posted this, Andy from EPoX-UK sent this in:

You may have done better removing the original capacitors with hot air rather than pulling them off like that and replacing them with conventional ones.

When we have to replace capacitors on mainboards we always remove them with hot air slowly and gently – heat up the back of the motherboard with hot air of 370°C and when the solder on both of the pins for each capacitor begins to melt, give it a waggle and hey presto – it’s in your fingers (hot fingers). You can then just put that capacitor onto the back of the board in the same orientation and solder onto the topside of the board.


How to Lap a Heatsink