UPDATE 4/21/00:
One of the issues with this board is its inability to easily recover from an overly aggressive FSB setting; most boards allow you to hold down the INSERT key and will boot up at a default setting – not so the MSI.

The board ships with some utilities which purports to include a SOFT FSB like program, but this does not work. I found two utilities on the MSI website (DOWNLOADS, SOFTWARE) which do work, one of which is an interesting SOFT FSB like program called FUZZY LOGIC. When you execute this program, a button is added to the system tray in Windows. Clicking on the button opens up a visual that looks like a steering wheel.

On the wheel are buttons which display information about the cache etc, but the AUTO button is the interesting one. Click on it and it tests each bus speed above the one you’re using until it freezes. When you reboot, you boot up at the bus speed you set in BIOS, so you don’t have to Clear CMOS and go through that routine.

I found it easier to use this utility to get to the next FSB, then stop it and use Prime 95 to test stability.

The other utility is Softcooler and works like RAIN or Waterfall – it is a little more robust in that it reports additional information on the system, but for my taste either RAIN or Waterfall seems a better choice – very small utilities that work in the background.

OK – this is the last set of benchmarks I’ll run – promise. This issue of SDRAM performance continues to bother me as I would dearly love VIA to succeed – notice that VIA boards are substantially less than comparable Intel boards? Let’s call it “Market Leader” pricing and leave it at that.

I decided to try a set of benchmarks using Samsung G8 PC100 (8ns) to see if perhaps the MSI did not like the Infineon PC133 (7.5ns). In doing so I discovered one flaw in my previous analysis: While I thought I was running the SOYO PC133 at 100 MHz, in fact I was running it at 133 MHz. The SOYO BIOS links RAM Frequency to CPU Frequency; even though it was set to 100 MHz in BIOS, in using SOFT FSB at 133 MHz, the RAM frequency was changed to 133 MHz as well.

I changed the results in the original review to reflect this. I am also adding another table of SiSandra benchmarks which points out an anomaly with the MSI 6309: If you use PC100 and set the RAM frequency to 133 MHz, it will run the RAM at 100 MHz, not 133 MHz. I tried both SPD Enabled and Disabled with RAM frequency set to 133 MHz, but results did not change much.

It does appear that the VIA/BX memory performance gap increases as SDRAM frequencies increase, at least as benchmarked by SiSoft Sandra – little difference at 66 MHz, increasing difference up to 133 MHz. The MSI is now going to Ed Stroligo for his look at it – a second opinion will be interesting.

In response to a number of emails, I have run memory benchmarks using SiSoft Sandra 99 and Pro 2000. The gap widens using SiSandra Pro 2000 compared to SiSandra99. Interesting that with a Celeron 433 @ 66 MHz with SDRAM @ 66 MHz, there is virtually no difference between the two motherboards.

What to make of all this benchmarking? For whatever reason, the VIA performance gap seems to increase as CPU and bus speeds increase. I speculate that VIA board designers use a reference design that is optimized around 66 MHz bus speeds. I hope that the “bus speed gap” is defined by BIOS limitations and not an inherent limitation of the VIA chipset.

Repeated inquiries on this point to VIA Technologies remain unanswered.

SUMMARY 4/3/00: If memory performance was on par with BX performance, the MSI 6309 would be a very good board. I found it stable and able to overclock my PIII 600E higher than my Soyo +IV. If future BIOS revisions close the gap, this board will rank very high.

In my quest to see how VIA boards compare to BX, I was alerted to the MSI 6309 most vociferously by a number of readers, so I bought one to test out. The interesting thing about this board is how it’s marketed – it shows up as a Socket 370 Celeron board, but if you read the fine print, you find out that it is FCPGA compatible, so it’s also a Socket 370 flip-chip board.

It sports the VIA 133A chipset (694X – 686A) and has 3 DIMM slots for a maximum of 1.5 GB. The package includes a decent paper manual – extensive enough to cover all the key points to quickly get started. The BIOS section is also quite good; the BIOS is AMI and looks/feels like the old Award Bios – nothing fancy but easy to manipulate.

Two cables are included for the floppy and an ATA66 hard drive. The CD has all the drivers including drivers for the built in audio. Other programs on the CD include a modem tweaking tool which functions pretty much like iSpeed and a monitoring program which I cover below. 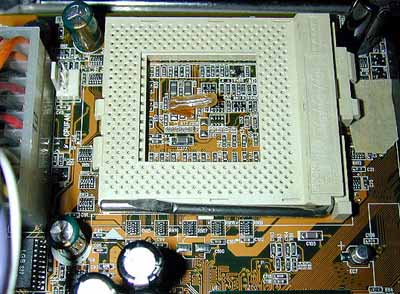 The socket is tight but not terrible; note the fan header against the power supply socket.

The socket handle (pic above) is a bear to adjust for large heatsinks – it is very beefy. Usually I can bend the handle down enough with a heavy pliers to get it out of the way; no such luck here. I wound up grinding the “bump” out of the handle with a Dremel. The capacitors around the socket are quite large – this may account for part of its stability.

You can see the CPU probe inside the socket in the left image below. This does a decent enough job but I would prefer thermal diode monitoring. However, it is quite sensitive and temp readings change very quickly so I can’t complain. This board also has the new modem slot (AMR); what I liked about that is the fan on my Matrox does not block a PCI slot (although the effect is the same, as this is a 5 PCI 1 ISA slot board thanks to the AMR slot). 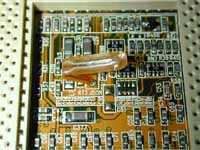 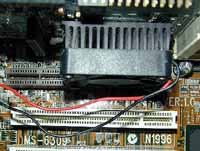 CPU Probe on the left, AGP, AMR and PCI 1 on the right.

For the life of me, I can’t figure out why this board does this. When I hit the power switch, it lights up and sits there waiting. I then have to hit the reset button and it posts. The board is not in a case, so grounding may have something to do with it. I’m sure it’s something simple in BIOS – ACPI remains a mystery to me.

There is printing on the board that has no relationship to this board – indications for SW1 and SW2 (don’t exist) and the plug pattern for the case connectors are totally at odds with the manual (the manual is correct). Don’t lose the manual!

Finally, I should mention that DRAM settings are pretty sparse; you can set CAS 2/3, you can set DRAM speeds at spec and +/- 33 MHz, but for SDRAM timing all you have is SPD Enable/Disable (Enable is an auto setting governed by the SDRAM specs). Not terrible, just can’t manipulate settings as much as some other boards.

The CD contains a nice utility package called PC Alert III; in addition to the usual temp/fan/voltage monitoring, there is a section called “Bus Racing”. This is supposed to be like Soft FSB – change FSBs in Windows. Unfortunately, it did not work with the 6309 – the FSBs bore little relation to what was in BIOS and changing FSBs did not change anything; I used the latest BIOS so I am at a loss as to why this does not work.

It looks like there are settings in BIOS so that if as the CPU gets above certain temps, a “CPU Throttling” utility will kick in and power it down – a nice feature.

There are four diodes next to the gameport; these light up red and green depending on where the board is in the boot process. If the boot process fails, there’s a guide to tell you what’s failing. I liked it because it reminds me of a drag strip Christmas Tree.

All tests indicate that, aside from memory, the MSI 6309 performs on par with the SOYO+IV. I ran a series of SiSandra99 benches with a PIII600E running 800 MHz with PC133 SDRAM running at 133 MHz on both boards, CAS2. Details below:

Sigh. Beginning to sound like a broken record? I asked some people in the industry why this discrepancy. Their answer was that VIA does not give board manufacturers the support that Intel can; part of the benefits of being the dominant market leader.

VIA has an incredible window of opportunity – if they get their act together, we will see real competition in the chipset market, much to our benefit. Intel’s RAMBUSt idiocy may yet drive us to VIA, swallowing near-term sub-par SDRAM performance in the process.

I like this board – it is very stable and, quirks aside, has real potential if it matures well. Would I recommend a purchase? Depends on your objectives:

First off, the standard disclaimer: This volt mod is not easy, and there is great potential for killing your beautiful A7V, so think twice before starting. Ideally you should be prepared to replace the board in case the worst comes

Ed Note: An interesting experience – sometimes it’s the “little things” that count. Well, I was flashing my KK266 to the 307 Turbo BIOS the other day when, in mid flash, the system froze and rebooted on its own…Needless to

We’ve said some nice things about the IWill KK266. A couple of our readers have not. I’ve taken a look around the IWill BBS and a couple other places, and while I’m not seeing too many problems, they are problems