Today, we get a chance to review a unique motherboard from MSI. Typically, we look at enthusiast products, since we are, after all, Overclockers.com. But not all of our readers overclock (blasphemy!) or need high-end equipment. Sometimes you just need a no frills motherboard for standard day-to-day operation. In that light, MSI sent along thier B150A Gaming Pro that makes use of Intel’s B150 chipset devoid of overclocking bells and whistles. As the name implies, the board is steered towards the gaming crowd. Let’s take a look at the board and see what it has to offer!

Listed below are some of the specifications for the MSI B150A Gaming Pro. It will support 6th Gen Intel Core/Pentium/Celeron processors on the LGA 1151 socket. It has two full length PCIe slots with one at the full PCIe 3.0 x16 bandwidth, while the other is limited to x4. With that, you will not have the ability to SLI NVIDIA cards as they require a minimum of x8 in that configuration. For those that are not using a discrete video card and will rely on the CPU’s iGPU, the Gaming Pro has outputs for it as well. They come in the form of 1x DL DVI, and 1x HDMI.

The board supports up to 64GB of DDR4 2133 MHz in its four DIMM slots. Being part of the B150 chipset family, the board will not go past that value, even when using XMP settings. To that end, grab the lowest timing DDR4 2133 MHz sticks you can find for best performance. There are a total of six SATA3 6Gbps ports and one SATA Express. On the USB side of things, there are two USB3.1 Gen2 Type-A ports, four USB3.1 Gen1 ports, and six USB2.0 ports. Just for clarification, USB 3.1 Gen1 is more commonly known as USB 3.0. The LAN duties are handled by the Intel I219-V, which has 15KV anti-surge protection as well as the Gaming LAN manager to help optimize traffic shaping for gaming.

While having a good NIC is almost a pre-requisite for multiplayer gaming, so is having good audio. The B150A Gaming Pro utilizes the 8-channel Audio Boost 3, which is the same as some of its Z170 big brothers (Realtek IC).

While it isn’t teaming with high-end features, there is plenty of what you need here for a great gaming experience and all around performance.

This board comes with what almost looks like an unfinished PCB in that it is mostly black, but at the right edge there is around 3/8″ worth of brown PCB. I thought that was unique and a bit odd aesthetically. Anyway, on the bottom of the board, spaced a couple inches apart from top to bottom are some LEDs. MSI allows you to edit these LEDs supporting up top 16.5M colors with eight LED effects.

The B150A Gaming Pro also uses MSI’s DDR4 Boost technology, which fully isolates the memory circuitry from the other components and helps ensure the memory signal stays pure for maximum performance and stability. This shouldn’t be an issue at those low memory speeds, but hey, its still a value add for sure.

As mentioned above in the specifications, this board uses the Intel I219-V NIC which has 15KV anti-surge protection and comes with traffic shaping software called Gaming LAN Manager, which will automatically prioritize games above other applications.

Next up is Audio Boost 3. The Realtek IC under the hood is protected both physically and for EMI by a metal shield covering it up. This helps to minimize interference from the surrounding motherboard components. It also sports dual OPA1652 AMPs (though not replaceable as in higher end boards) to help round out a superior audio experience.

Though the board is not of the enthusiast class, MSI still uses higher end components to increase reliability with its Military Class V standards. These include solid caps and all new Titanium chokes. Last, but not least, is MSI’s use of ‘VGA Armor’ on the PCIe slots. In this case, there is no metal shielding around the PCIe bracket, but there are more solder points to help prevent board damage from the heavy GPUs that mount into them.

Here are some additional features courtesy of MSI:

For further features and details, please see the MSI website for the B150A Gaming Pro.

Below is a brief slideshow showing the retail packaging and accessories. The front of this box is still black and red as MSI’s gaming themed boards are. However, what you do not see as prominent is the MSI Gaming dragon. Instead, it is what appears to be some kind of concept car in motion. There is the Gaming Series badge, but not across the cover as we normally see. Also on the front it shows the name of the board, the series it comes from (Performance Gaming), and the 6th gen processors it supports.

The back of the packaging shows several high-level features like the DDR boost, VGA armor, Mystic Light for the LED, Gaming LAN, and LAN protect just to name a few. When you open the box up, the motherboard is right on top in its anti-static bag. Below a cardboard partition is where you can find the included accessories and manuals.

In our first official look at the board, we see an all black… ok, mostly black PCB with a small PCH heatsink and two independent heatsinks for the VRMs. There are two PCIe x1 slots, 2 PCIe x16 slots, and two legacy PCI slots. Scattered around the CPU socket, DIMM slots, and above the PCIe area are four fan headers.

To the right of the board is that curious stripe I was talking about earlier where the board looks almost not finished. You can see that appearance holds until you actually hit hardware on the PCB. There is a total of about an inch of PCB that simply has nothing going on there. It’s not really a problem more so than it is just a curious look. The LEDs do a good job of shining through that area and illuminating that portion of the board and your case.

Not much to see on the back of the board really. If you look closely, you can see the LEDs on the left, and notice the electrical setup of the PCIe x16 slots are x16/x4.

Moving in closer to the board, the lower left hand portion has the EMI shield covering the Audio Boost 3 chip. Towards the top and the middle of the board is another EMI shield, but this time covering the Intel LAN IC. The PCIe has a couple of x1 slots, two x16, and three legacy PCI slots in case one may need those.

Around the DIMM area is the front panel USB3, 24-pin power connector, and a couple of fan headers. To the left you can see a couple of SATA ports and the one SATAe port. I like that there is one SATAe port on this class of board. Also pictured here to the right of the 24 pin is the Easy Debug LEDs that show on boot what the troublesome part may be. I prefer the number/alpha codes, but this is a convenient feature as well.

The socket area has a few of the solid caps perched in front of two heatsinks. There is plenty of area to mount a variety of CPU coolers, or even water blocks if you wanted to quiet operations a bit.

Flipping around to the back panel I/O, we have plenty of ports to keep you attached, including a total of six USB 3.1 ports (two Gen2/four Gen1) and two USB2.0 ports that sit below a PS/2 port. For video outputs the B150A Gaming Pro has a single DL DVI and HDMI port. The audio has the typical 1/8″ jacks with a SPDIF/Optical output.

Across the bottom of the board there are more I/Os – FP Audio, USB ports, as well as your FP buttons.

Below is a list of some of the ICs used on this board for USB, Super I/O and PCIe to PCI bridge.

In the slideshow below, we show screenshots of the UEFI Click BIOS 5. As you know from my MSI motherboard reviews, I am a big fan of their BIOS implementation and that doesn’t change here. The only difference here is not having the ability to overclock via multiplier, nor take the ram over 2133 MHz. There are plenty of options in the right places per usual.

Not pictured in this review is MSI Command Center.

Listed below is the test system used for benchmarking:

We’ll perform our usual set of benchmarks, which test rendering, memory performance as well as single and multi-threaded CPU performance. For 2D benchmarks, we’ll use SuperPi 1M and 32M, wPrime, Intel XTU and PiFast. For rendering, Cinebench R11.5 and R15. Memory performance is checked against AIDA64 and MaxxMEM. For encoding we use x264 and PoV Ray. Stock testing is performed with the BIOS as you get it out of the box, which will vary from motherboard to motherboard. As far as overclocking goes, it’s just not in the cards on this board. The highest multiplier available was 42X, so I just left it on auto to boost its way on up there. The DDR4 is also limited the spec of 2133 MHz. Since we can’t overclock a thing, there will only be the results from stock speeds and no comparisons like we usually run. 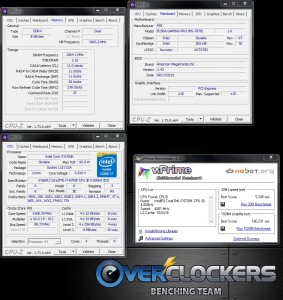 MSI has a very solid budget board in the MSI B150A Gaming Pro. Being a gaming oriented board, we see features like the Intel LAN with Gaming LAN software to help automatically shape traffic and make sure you are getting the lowest ping for your online games. They also use the Realtek based Audio Boost 3 for sound and the ‘gaming device mouse port’, which all help improve your gaming experience.

I am not sure on the MSRP for this board, but I would expect somewhere around $100 or so. I do not see any other B150 chipset motherboards on the market at this moment, so the the board will have to stand on its own merits – which it can certainly do. If you are looking for an entry-level motherboard with a slew of features geared towards gaming, make sure you check out the MSI B150A Gaming Pro.

EDITORS NOTE: MSI reached out and confirmed a MSRP of $119.

We hold in our hands Skylake, Intel’s new CPU, but more specifically the new chipset that goes along with it named, Z170. Overclockers.com was lucky enough to get a couple of boards, including the MSI Z170A Gaming M7. This board promises to be excellent for gaming and should be solid for overclocking as well. It’s time to dig in and see what the Gaming M7 is made of! Read More

Today we have a chance to review yet another GTX 760. This time, it is the MSI N760 HAWK. If you remember from GPU generations past, the HAWK versions of cards, to me, are the little brother of the Lightning from MSI. This usually offers more overclocking centered features such as voltage monitoring, and a beefed up PCB to help get the most out of the core. Let’s take a look at what this version has to offer. Read More

October 8th was the release date for some embargos for the new Z390 chipset. And with this date coming and going we saw the major board partners show off most/all of their new lineups. With this brings new naming conventions, new looks, and new features on the motherboards. We’ll list the boards from each partner along with any high-level features. Read More