It has been a few months since the release of NVIDIA’s latest GPU architecture, Pascal. After the widely praised GTX 1070 and GTX 1080 came out, we then saw a mainstream card in the formidable GTX 1060 and its variants. Last, but not least, was the monster Titan X Pascal. That is a pretty solid lineup from top to, well, that mainstream I mentioned a sentence or so ago. What we have been missing from camp green is a lower end card to replace the GTX 960 and have something in that price bracket to match AMD RX 470. This hole is attempting to be filled by the GTX 1050 Ti. As many will guess by the name, this card fits in below the 1060 and above the GTX 1050.

In our hands we have MSI’s take on NVIDIA’s mainstream offering in the MSI GTX 1050 Ti Gaming x 4G. It promises to offer improved cooling and performance over the reference models using a Twin Frozr Cooler variant as well as increased clocks. Take a look below to see how it performed in our testing.

The MSI GTX 1050 Ti Gaming X 4G has a total of 4GB of GDDR5 vRAM with a 128-bit memory interface behind it. The memory comes in 1752 MHz (7008 MHz effective) in Silent and Gaming modes. This bumps up to 1777 MHz (7108 MHz effective) in OC Mode. This translates to a bandwidth of 112.1 GB/s in its base speed. Also something to note is Pascal’s implementation of its 4th generation memory compression which should help improve the card’s memory performance.

The Samsung-made, 14nm, GP107 core is small and presumably cost effective, coming in with a die-area of 132 mm² and a total of 3.3 billion transistors. It has a total of 768 Shaders, 32 ROPs, and 48 Texture units. This is across six streaming multiprocessors with 128 CUDA cores each each. Core clocks come in at 1354 MHz base clock with a boost of at least 1468 MHz. With their latest implementation, Boost 3.0, we know this will go well past that value in most situations.

Output-wise, the MSI GTX 1050 Ti Gaming X 4G supports up to three displays through its DisplayPort (v1.4), HDMI (v2.0), and DL-DVI-D outputs. MSI recommends a 300W power supply which has one 6-pin PCIe power connector and will easily handle its meager 75W TDP including overclocking. The card is around 9″ long, 5″ high, and 1.5″ wide. It should have no issues fitting in most small form factor cases.

Our GPU -Z confirms exactly what our specifications table said above. Additionally we take away this sample has Samsung memory on it and, like the 1060, does not support SLI. I have to admit that is a shame, particularly on the GTX 1060 where it is at a great price point to do so.

Major features of the card include its signature cooling in the Twin Frozr VI (TF VI). The TF VI uses their TORX 2.0 fan to generate 22% more air pressure for silent cooling performance. The TORX fan also utilizes MSI’s dispersion Fan Blade technology which has a, “steeper curved blade which accelerates the airflow, increasing its effectiveness.”

The Twin Froz VI uses Zero Frozr which completely eliminates fan noise in low-load situations. At temperatures of under 60 °C, the fans will not spin. After that, it ramps up to a pre-defined fan curve. These fans are completely silent to me in an open air case while doing all the testing for this card.

Last up is the heatsink design. Here MSI considers every detail for the best cooling solution with its Airflow Control Technology. By looking at advanced aerodynamics, the cooler directs more airflow over the Twin Frozr VI heatpies.

For many more features, please see the webpage for the MSI 1050 Ti Gaming X.

The slideshow below shows the retail packaging. Looks familiar, ehh? Yep, the card we have is from MSI’s Gaming line which is generally red and black themed along with their cool looking MSI Gaming Dragon. The front of the box has a photo of the card along with the model and “trim” level prominently on the front. Flipping the box around usually exposes some specifications and other details about the card, and that holds true here as expected.

MSI uses a box in a box method to separate the card from the accessories with the accessory box on top of the card. The card itself has its own anti-static bag and sits nice and snug in the form fitting foam.

In our first look at the card, with the parity in the product lines, you can hardly tell the difference between this and its big brothers in the Gaming line. They are use the Twin Frozr VI cooler and its TORX 2.0 fans are the dominating features on the card. The shroud is split into a red and black color as we are used to. The TF VI also has LED’s (not RGB, note) which you can control through the MSI Gaming App. These are the red notches above and below the black fan and MSI logo on the top. The back of the card exposes the PCB, no back plate here.

Spinning the card around Matrix-style shows you the white MSI LED that I was talking about on top. Also in view is the large heatpipe snaking its way from under the core to the fin array. The bottom shot shows that same large heatpipe which goes to the other side of the fins.

Our closer look at the I/O does in fact confirm what was outlined in the specifications above. We see a single of each: (From L to R) DisplayPort, HDMI, and DL-DVI-D supporting up to three monitors and 7680 x 4320 resolution.

Power delivery to the 75W card could, and does on other models, come from only the PCIe slot. However MSI gave its card a 6-Pin PCIe power connection (150W can go to the card) to help with overclocking stability.

The next set of photos show the bottom of the heatsink. There is direct contact to the exposed copper of the single heatpipe. Taking that heatsink off exposes the board and its four memory chips as well as a thoroughly-covered-with-TIM core. We also see a glimpse here of custom PCB using Military Class IV components on its 4-Phase implementation.

This GDDR5 memory chips are made by Samsung. THe K4G80325FB-HC28 labeled chip is rated to run at 1750 MHz or 7000 MHz GDDR5 effective. I can imagine some headroom left in these.

Below is the latest version of MSI Afterburner. Still no voltage control, but I don’t think anyone is expecting that on a low-end card, or Pascal for that matter. You do have full fan, core, and memory control. The power limit on this card goes up to 125%.

Below is the MSI Gaming App. You can get small, one button clock-speed bumps here, and control the LEDs among other things. 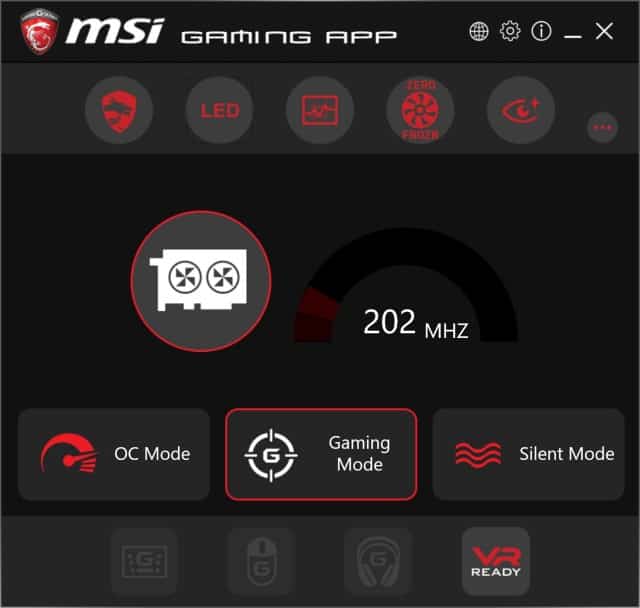 Note all testing below uses 1920×1080 screen resolution (settings also carry over to 2560 x 1440 and Surround/Eyefinity testing if applicable).

This testing is going to be pretty unique versus our other reviews. Here, because we simply do not have any cards that perform close enough and are new enough to at least have most of the benchmarks and games we use, there will not be any other cards to compare it to in the graphs. I will have to explain where the card lands in comparison.

To that end, The MSI GTX 1050 Ti Gaming 4G tends to be slower than an RX 470 by around 25%, a bit less than 10% faster than an R9 380, and around 15% faster than a GTX 960. The GTX 1060, its big brother, is nearly 45% faster than this card. These results were from TechPowerUp’s review of the same card. They do a great job at bringing you a comprehensive list of many cards and where they all fall in line performance-wise at varying resolutions. 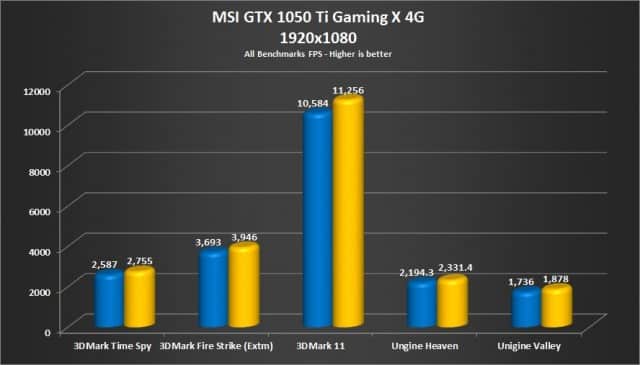 Again, no comparisons here, but as we can see in most titles, the 1050 Ti Gaming X is over the 30 FPS mark with our aggressive settings. Only in killer titles like Crysis 3, Rise of the Tomb Raider, and Ashes of the Singularity, does the card drop below 30 FPS. Some settings in some titles will have to be lowered for a smooth gaming experience. 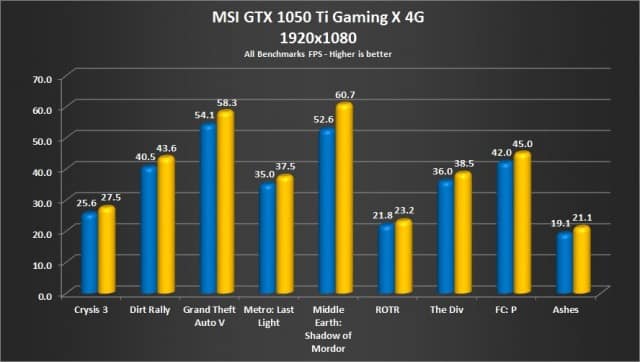 As far as pushing the limits, same story here… no voltage control and where my overclocked clockspeeds are above, is darn near close to if not the end. In this case, it was a bit odd in that, I tried to push past the 1911 MHz actual boost I had, but nothing read the clocks right even after I raised the clocks. The boost seems to be locked to MSI AB software. The memory I was able to get up a bit higher and maxed out at 2056 MHz (8200 MHz effective). These particular IC’s really had some headroom in them. With a 128bit bus, any bit helps, even at 1080p.

I really can’t believe what I am seeing here… a viable 1080p card and system power use peaking AT THE WALL at 174W. That’s right folks, 75W card, 91W CPU and some other goodies managed to stay under 175W even when overclocked. During stock operations, that dropped to a peak of 165W. I’d say a 300W PSU is plenty too!

Temperatures on this single heatpipe version of the Twin Frozr cooler managed to hit 67 °C while overclocked in Unigine Valley loops. The fan speed ramped up to around 50% fan at that speed which was still whisper quiet during testing.

The MSI GTX 1050 Ti Gaming 4G is a solid entry into the mainstream market. Its performance laying somewhere between a GTX 960, RX 460, and RX470 on the high end. MSI has worked their usual magic over the reference card by putting on its Twin Frozr cooler as well as adding the additional 6-pin PCIe power adapter to help with that cause. The cooling solution was effective and quiet at heavy load and dead silent while in zero fan mode.

Pricing on the MSI card comes in at $165 MSRP, or $25 over the reference card price of $140. We found it at Newegg.com for $164.99. If you look at the market for mainstream, this is a bit slower than the RX 470, and costs the same or less depending on the model you buy so pricing seems to be in order with its main competition. When looking at the 1050 Ti’s themselves, it sits at the middle of the pack. Not a bad deal at all. It’s a card that fills the gap for the mainstream market, but not so sure there isn’t room for a 1060 LE between this 1050 Ti and 1060 as well as pricing to do so. Time will tell on that front.

If you are looking for a mainstream card that can handle 1080p gaming, look no further than the 1050 Ti. With MSI’s take on the card putting on the Twin Frozr cooler, upgraded 4-Phase power with Military Class IV components, along with high factory overclocks (and good on this sample), the 1050 Ti Gaming X 4G should be on your short list.

In our hands we have MSI's take on NVIDIA's mainstream offering in the MSI GTX 1050 Ti Gaming x 4G. It promises to offer improved cooling and performance over the reference models using a Twin Frozr Cooler variant as well as increased clocks. Take a look below to see how it performed in our testing.