When choosing a graphics card to buy, brand name matters the least in actual performance terms. Since early graphic card releases are reference design, they are typically identical between brands; other than the packaging, cooler sticker, warranty, etc. As such, purchasing decisions of these cards, most of the time, can be attributed to brand reputation and customer loyalty. Only a certain number of these reference cards are manufactured for the resellers, and when the supply of reference design cards runs out, video card companies like MSI, XFX, and Sapphire (as we all know, they are quite numerous) are free to make their own changes and (hopefully) improvements as they see fit. Some of these changes provide huge performance gains, while others cut manufacturing costs. Some are only slightly different than the reference card was, and some are like night and day. MSI’s GTX 275 Lightning is in the performance/night and day categories.

A few specs unique to this card:

The black and green box sports the Lightning line’s jet fighter and lightning bolt theme on the front, with the illustrated feature set on the back. Inside the box, we find an MSI N275GTX Lightning graphics card, quick user guide, quick install guide, DVI to VGA adapter, DVI to HDMI adapter, PCIe power connector, lightning afterburner software, driver and applications CD, and a cool booklet detailing all of the products features. 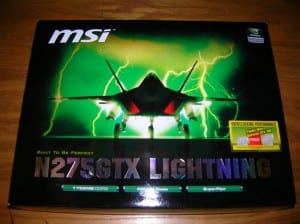 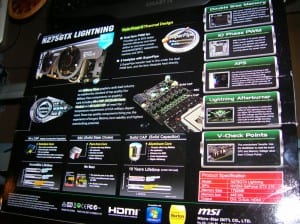 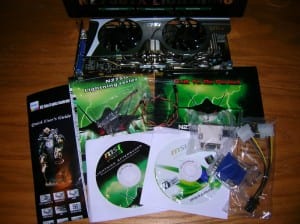 The first thing you notice about the card is the obviously non-reference MSI Twin Frozr II cooling solution. This is definitely a selling point on its own, but far from being at the top of the list of what makes this card so special. With five heat pipes, copper base, numerous tightly-grouped fins, dual 80mm fans, and an attractive fan shroud, this cooler definitely looks the part.

We can also see here that the card has connections for DVI, HDMI, and VGA cables, so with a single display setup, no adapters are needed. 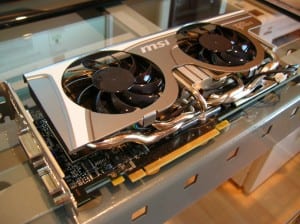 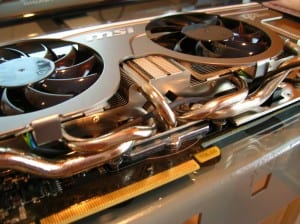 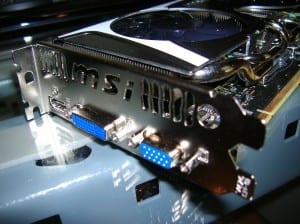 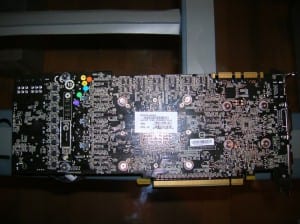 On removal of the heatsink and fan (HSF) assembly, we see that MSI did not overlook anything in keeping the remaining vital components cool. On the naked card, see the cooling plate was, in fact, making good contact with the components under it, as shown by the deep impressions in the thermal pad. Also, we cannot forget about the 1792MB of memory packed onto this card. I love the fact that the ram is all on the front of the card; this makes it easy to cool, and without the need for a backplate. 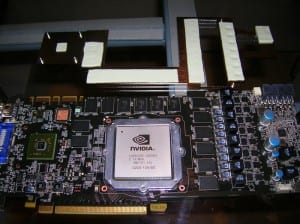 This card also features a 10 phase PWM, which when coupled with MSI’s APS (Active Phase Switching) combines stability and power saving by allowing the card to switch between 3 phases, 6 phases, and 10 phases. There are phase indicators on the back of the card, showing the APS current state. 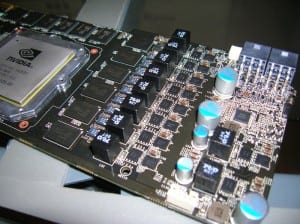 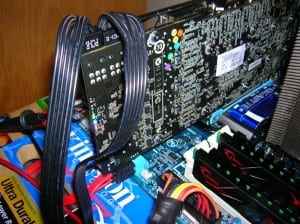 We all know the importance of a smooth, or at least flat, heatsink mating surface. This has hardly that. There are actually deep round grooves throughout the Twin Frozr II’s base. How much does this affect performance? I plan on finding out exactly when I eventually sand it flat. Hopefully the thermal paste will do its job and fill in the gaps between the cooler’s base and the GPU’s IHS. 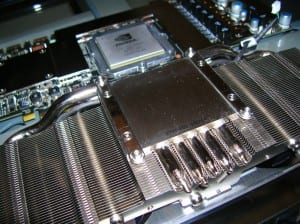 Want to adjust your card’s voltage but don’t want to take a soldering iron to it? No problem! Through MSI’s Lightning Afterburner software (and other 3rd party applications) you can adjust the vGPU to practically any value you could desire. MSI has even included read points on this card for both vGPU and vMEM, in the form of jumpers with meter probe sockets on the end. Though I have no reservations about hard-modding a card, I find these features invaluable. 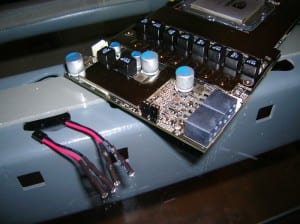 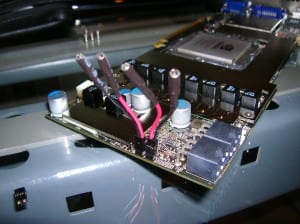 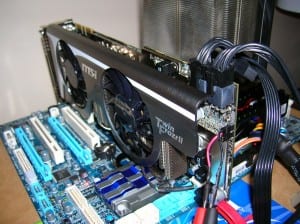 The Lightning Afterburner software allows you to adjust the voltage (as previously mentioned), GPU core clock, memory clock, and fan speed, has pre-defined settings for game mode and power saving mode, as well as slots for 3 overclocking profiles. 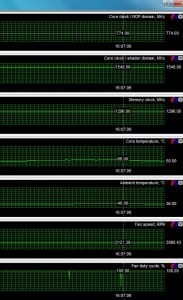 The following testing was done at what I would consider effortless 24/7 overclocked settings. 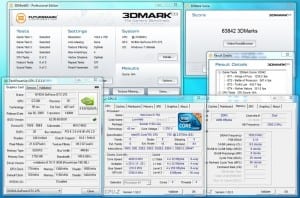 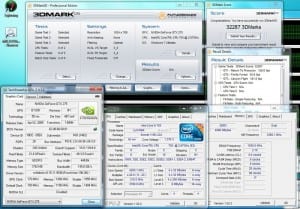 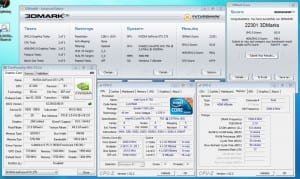 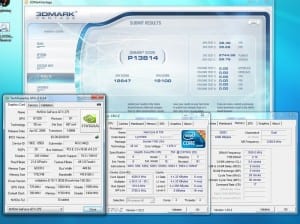 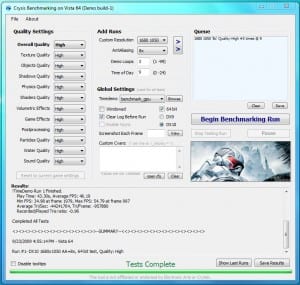 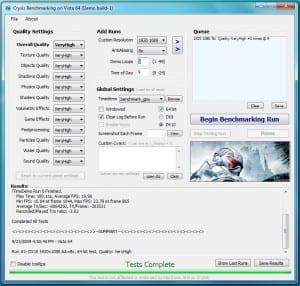 MSI clearly had the enthusiast in mind when designing this card. With a great aftermarket cooling solution and built in tools for easy voltage adjustment and measuring, the GTX 275 Lightning is quite an impressive card. So far, I have had the card’s core clocked up to 850mhz on air cooling, with seemingly limitless possibilities for liquid nitrogen testing. I’m saving that for an upcoming online overclocking competition, but I know this card won’t disappoint.

At a higher price point than most non-reference GTX 275 models, I would not say this is the card for everyone. However, it is the ideal card for anyone looking for a fun and easy GPU overclocking experience. I would also say it is the top contender for the extreme overclocker on the NVIDIA side of things.

I would like to thank MSI for letting me test this product. I’m having a great time with it, and have yet to unleash its full potential.

I see bright flashes in the distance. What could it be? Wait… listen. What is that noise following it? Sounds like thunder. So, I guess that means the flashes are lightning. Could it be? Is it really? That’s right ladies and gentlemen, since this is obviously a computer enthusiast based website that has nothing to do with meteorology – this HAS to be the long awaited MSI N780 Lightning that has rumbled its way into my reviewer’s den of torture! MSI surely took its sweet time bringing this card to market with a teaser or two along the way. From the looks of those teasers and leaked shots we saw recently, this video card loos to be a beast! At least hardware wise. Let’s see if my attempt at ‘wordsmithing’ is backed up by the hardware and performance of MSI’s top tier GTX 780.

MSI has given us the opportunity to review one of their high end boards for Sandy Bridge, the Z68A GD65 (G3). This board has MSI’s revamped Click Bios II, Overclock Genie II for one second overclocking, the “World’s first PCIe Gen 3 Mainboard brand”, Military Class II capacitors and chokes, support for the upcoming 22 nm Ivy Bridge CPUs, and a 5 year warranty.