When I had intentions of buying myself an mp3 player, the MSI Mega Stick1 was a best buy for the money I had. The great surprise was that it was very stable – no restarts, shutdowns and other stuff that other “el cheapo” players had problems with. The software was fast and precise; it was a real pleasure to use it. The conclusion was that MSI gave its best to make a good mp3 player.

That was the beginning, but after couple of months of use a problem appeared. Some of you that own Mega Stick1 probably think that I had problems with sound that was breaking up while I was on the move. Well you are right, that was exactly what happened. You could always hear one earphone, but the other was breaking up when I was moving. I checked it out on the internet and found out that there were other cases of this that were similar. People were complaining that the wires were bad in the earphones, right next to the 3.5 mm STEREO MALE connector.

I thought it was the solution but I destroyed my earphones that way. I decided to find out if the connection was broken, but all I found was a good wire. After buying new earphones, the problem was still there, so I definitely knew that earphones were not the problem.

Next step was opening the player. This is when I found the real solution. You will need the following tools for the repair:

Disassembling the Mega Stick1 is quite easy. You remove the USB cap where you will see two screws. Remove the battery lid, and battery. The third screw is located on the opposite side of the stick under a rubber cover, as shown on the picture:

You will remove this cover and put it at a safe place so you can put it back when you start to reassemble the player. Unscrew these three screws by using an adequately precise screwdriver. After this you are ready to remove the back cover of the player. In any case be gentle, even though there are very little chances that you break something. Once you have removed the back cover you will notice the PCB: 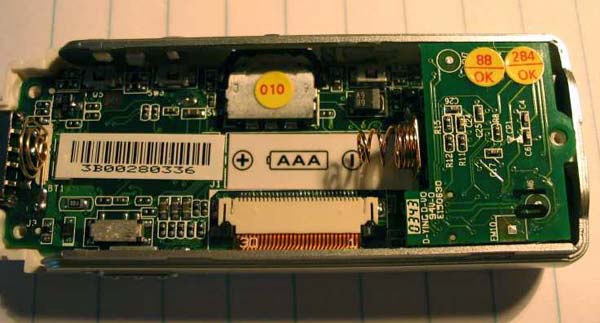 There is one smaller PCB that is plugged into the “big one”; you remove it by gently pulling up, as shown on the picture: 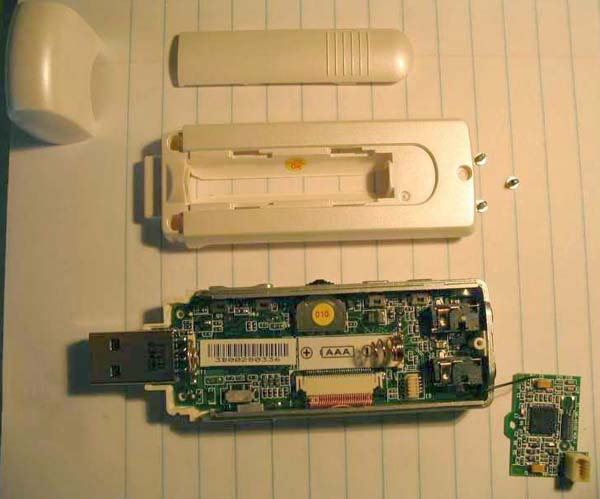 Be careful as there is a wire there that you don’t want to tear off. Now you can see the 3.5 mm Stereo female connector (position 2). That is the cause of the problem. 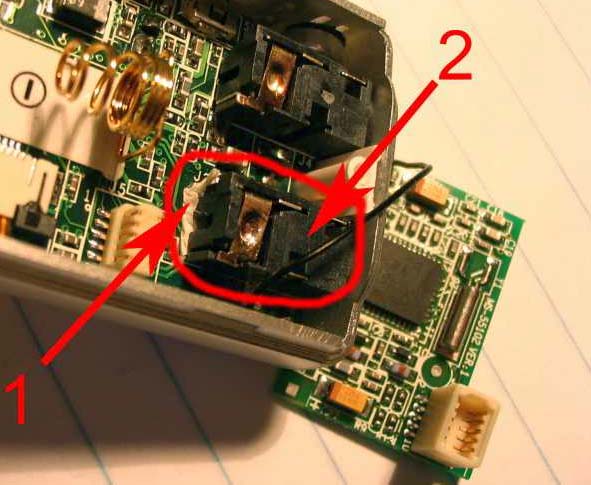 The thing that is wrong with it is that the plastic part of the connector has gotten loose and it allowed the contact to break up from time to time. To fix it, use the piece of cardboard (position 1) (I used cardboard of a cookie box.) A very small piece is enough (estimate how big it is by looking at the picture).

Use your tweezers to put the piece of cardboard (position 1) under the plastic part of the 3.5 mm Stereo female connector. You can put a drop of crazy glue on the cardboard just to make a good bond if you want to. I did not do that, it is optional.

So there is no need to destroy your headphones. Disassemble your Mega Stick1 and see if headphones connector is loose. If the plastic part can be moved 1 mm up and down than that is what the real problem is.

By the way I take no responsibility for damage that you cause to your goods if you try this.

I read with interest the story of how to get a broken lip on a socket not to matter and be able to use the socket just the same. I’ve been doing a similar mod having broken off many slockets

Network Security 101: How to read an E-Mail Header

September 21, 2009 dark_15 How-tos 0
E-Mail is one of the most common way to send messages on the Internet, but not many people know how e-mail gets from your PC to your friend.

There’s no way to get around it: An Overclocker’s life, be it frugal or expensive, inventive or acquisitive, will always center around buying new parts. The following is intended as a Beginner’s Guide to the selection and purchase of the