Before I get into details, here’s –

Well, after doing a lot of research on the web and on the forums, I decided to take the plunge and buy a Prometeia/Tower combo. I did look at the Vapochill units but did not like them. To me, the cases appeared very ugly. I did not like how the cooler was in the top of the case, making it top heavy. I also plan to use my Prometeia with other cases in the future.

The Prometeia was a huge step for me – I had never before attempted such extreme cooling before. My previous setup was a Athlon XP 2400 @ 2324 GHz with an FSB of 333 MHz. I used the SLK-800 heat sink with the Vantec 80mm Tornado fan. This was a very effective setup, but was way too loud and I wanted to go further with my overclocking, and air would not allow me to go any further. 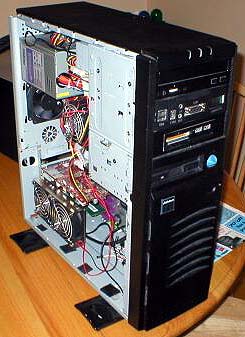 I placed a pre-order for the Prometeia in November and received the unit on December 4th. The system came in two boxes, one for the Prometeia and one for the case. Both were well packed and came undamaged. The Prometeia came with every thing that it was supposed to come with. I was very pleased that nothing was missing and was in great shape. 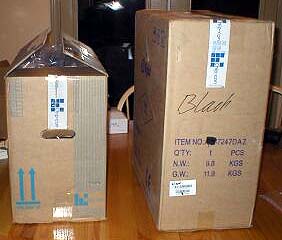 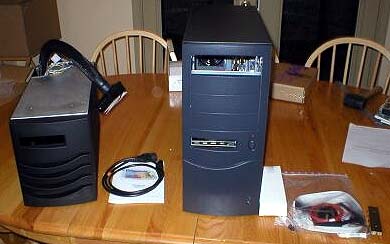 Now I must stress that pages 10 and 11 (Pentium 4 users: pages 12 and 13) are very important and must be read through carefully.

Following the first step, I mounted the foam gasket, after putting some seal string around the perimeter of the gasket, which I found they changed with my system. The cover is now a plastic cover that looks like the gasket but has a heater pad inside it. This is what the new gasket looks like: 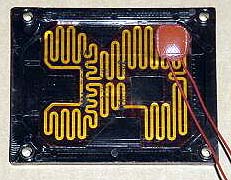 Once I got the gasket lifted a bit, it wasn’t really a problem after that. I remounted, whipped the sweat off my head and moved on to step two.

With the motherboard mounted to the tray, they wanted me to place the CPU in the socket and place the shim on top. The shim does not fit the T-Breds and requires modding to get it to fit correctly, but I’ll get to that in just a second.

Before I put my CPU in the socket, I put Luberex in the CPU socket. Luberex is a non conductive silicon grease which prevents rust. I squeezed out small amounts of the grease onto the socket and rubbed the grease into the pin holes with my finger.

After filling the pin holes, I installed the CPU. Next came the part I found particular annoying above anything else: The shims provided do not fit the T-Bred CPUs correctly and need cutting to get them to fit. As you can see with the picture below, I had to mod the shim used or it would conflict with the components on top of the CPU: 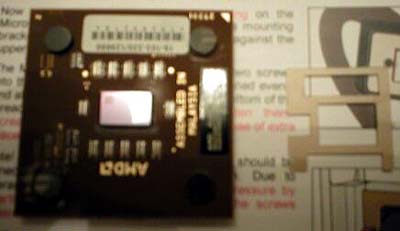 Next I had to mount the mounting clip that the freezer head would mount on later. Mounting the clip was very straight forward – I just had to squeeze the stands towards each other, then slowly release the stands and it clipped right onto the socket.

Next I had to mount the upper bracket which the freezer head rests upon, also forming a air-tight seal. I had to cut two of the legs off the upper mounting bracket. There were two small components that prevented the bracket from resting level, so off they had to come off. This was very easy to do – I just used a X-acto knife for this. 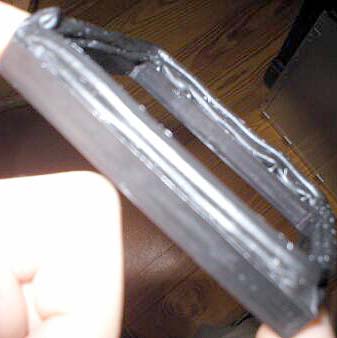 The next step was straight forward too – I just mounted the motherboard plate back in the case: 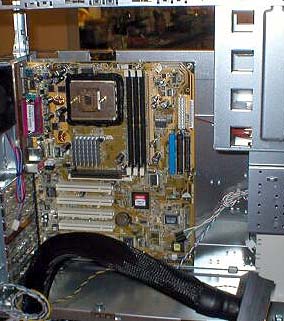 Now for the fun part – mounting the chiller head.

I put a small amount of Arctic Silver III on the chiller head and used a zip-lock bag on my finger to spread a thin layer across the whole head. Next as a test, I mounted and then removed the head. This was to make sure I was making good contact with the CPU Core.

I then placed 1 layer of seal string on the upper mounting bracket and mounted the head. I then placed the two tension screws in the holes on the freezer head and tightened them until the screw heads were level, or just a tiny bit below the surface of the head. 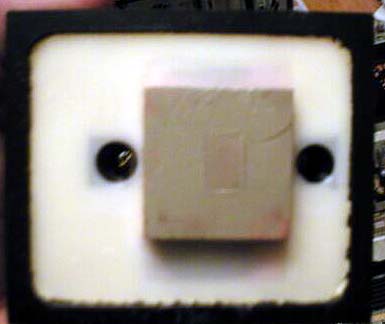 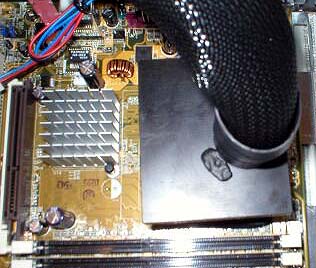 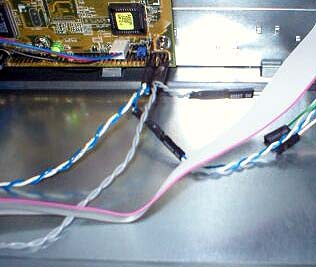 Now with the system wired up, I was ready to fire up the system. Now this part scared me.

I turned on the system and expected the system to drop to -33C and boot up. Well the system started up and nearly got to 30C, so I powered the system down. I removed the head and I found that my contact with the core was not as good as I thought. So I redid the seal string on the upper mounting bracket and remounted the freezer head.

While screwing the screws down, I made sure to apply pressure to the area were there was bad contact with the CPU core. I then fired the system up and the temp rose to around 15C and then rapidly dropped down to -33C and the system came up. Success!

I then ran the motherboard with all BIOS settings on default and then loaded Windows 2000. The setup process went smoothly. 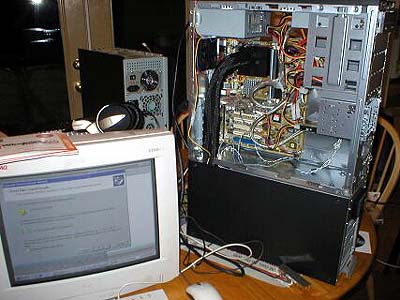 Once Windows was installed, I loaded all the necessary drivers, 3D Mark2001Se and SiSoft Sandra. I benched the stock system with 3D Mark and scored in the high 11,000 area. I then set my FSB at 170 and set my memory to the most aggressive options available.

This raised my CPU to 2.55 GHz. I had my Radeon running higher then this in my old system, but I had better cooling on it at the time. After upping the FSB and the speed of my Radeon, my 3D Mark increased to 16428 (HERE).

Over all, I must say I am very happy with my results, but I’m a bit perplexed as to why I can not run my FSB above 170. I tried backing off the timings but this made no difference, and neither did upping the voltages for the mem. 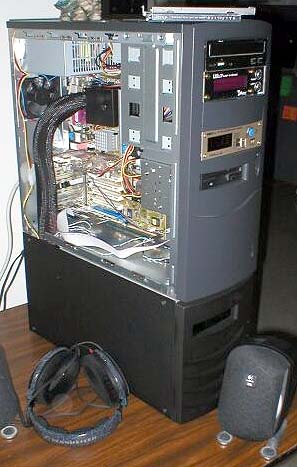 One other thing to note is that the on die-sensor does not seem to work right at these temps. It reports my core at 5000 C¹ and I highly doubt it is that high or other wise I’m probably dead by now >). MBM5 reports the CPU temp at 26F.

Thanks to every one on the forum, Joe, and Kunaak for the reviews and the help!

SUMMARY: A high-performance waterblock for socketed CPUs. Cool-Computers was nice enough to send a bunch of waterblocks to test out – I am going to report first on the socket version pictured below: This block is of the “traditional” design