Here comes the diary of a long, tiring journey to achieve the result shown below: 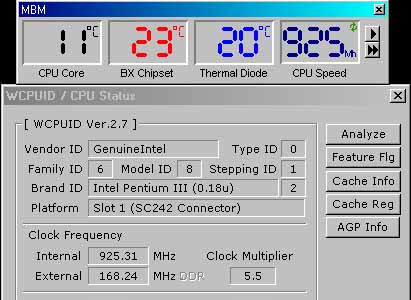 My power supply went crazy (I assume it went down first). I don’t know why or how, but the last voltage readings on my BF6, before it completely burnt down, was normal except the “-64V” at the “-12V” value. I am not sure which went nuts first (the board or the PSU) but I had to exchange both.

I made a ridiculous decision and exchanged my burnt BF6 with a BE6II. I have a Seagate Barracuda. I am an idiot – it took me 3 days to get a non self-destructing setup. I had lost a lot, mainly all my mail archive (which I had never felt the need to backup). You have to update everything about UDMA66 to 1.22 version (bios & drivers) to get these two running together. But even this, is not a perfect solution. Some problems still remain.

All my PC life, I had only one saviour. Right, that’s him. It had always been his work, and it still is. I found the most valuable piece of software an overclocker can have; it’s cheap and it is holy. It is called Norton Ghost. It weighs 600kb, runs on DOS, so you can run it from a floppy.

Basically it is a HDD cloning software. What it does is unbelievable. You first set your system up (windows and everything). Than you use Ghost to make an image of your system on an other HDD. It can create images at 200 Mb/min with 50% compression on my system. So this takes only a few minutes and roughly half the size of your installed files.

Then you start overclocking. When you screw up and loose your setup, it takes just 1-2 minutes to format your drive and extract all your original system back up from the image generated. This is like magic…Trial version can be downloaded from Symantec.

I bought a Slot1, boxed CuMine 550 later on. These can be found easily with reasonable prices. Mine could do 825 MHz with default voltage and retail heatsink/fan. But people say not all of them are that good. Went up to 925mhz (1.80V core voltage) with my “good water cooling” setup (explained down below) but anything past 900mhz doesn’t seem to be stable enough.

At the moment, I have no extra cooling (no peltiers etc.) – I just put the water and pump outside my window, and it is cold down here. But I will arrange something, at least to cool the water, as summer is coming.

The first water cooling setup I tried is not one of the frequently
practiced ones. I call this “Encapsulated Partial Immersion” setup. The name may sound sophisticated, but the setup itself is not. What you do is, find a small capsule (I personally used one of my contact lens boxes), stick it on your CuMine and run water through it. This way, core of you CPU is in the water all the time. 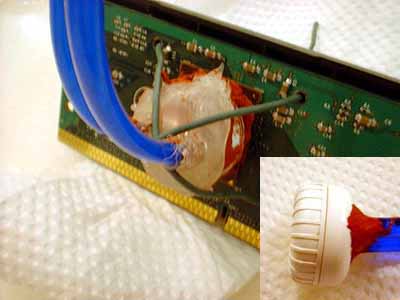 Good points; it is cheap (you don’t need a water jacket), it is extremely light, and it is easy to build. Bad points; it is not as effective as a jacket based setup (cooling power is extreme when the CPU is idle, but when it is not, this setup can not take away enough amount of heat), it is not clean (can be seen in pictures) or easily replaceable as you have to stick the capsule on cpu and keeping your cpu core in water all the time may not be so healthy…Pictures are included…

I used the conventional method. I asked a friend to make me a water jacket like the Senfu jacket. It is small, light, but effective. There is only one difference; mine is made of copper. This setup seems to be the winner. First of all it is a perfect replacement for air cooling as it is neat, easy to install and silent. It is not like those huge, heavy “trouble-maker” jackets. Only one word is enough to describe this jacket: “Elegant” :-))))) 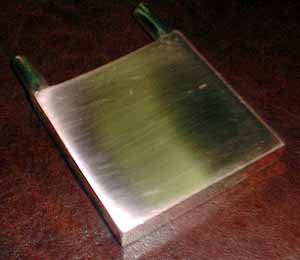 The original drawing I sent to my friend and pics of the jacket are included. The jacket was built according to the drawing, making it very light – actually lighter than most heatsink/fan combos – as it
is quite hollow inside. After that a lid was molded on top to make it the compact box you see. 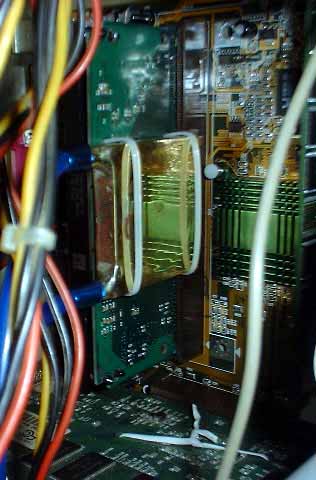 I accidentally discovered an extremely useful substance for water cooling setups. It is called “Liquid Gasket” (sorry, I translated it from Turkish). I bought a tube with “Sista” brand (from Henkel) for $2. Initially this stuff is like the thermal paste we use. It is a bit more sticky though. In one hour time, this stuff freezes to form an extremely elastic, heat resistant (white version can handle 250 degrees C, red version can stand up to 300 C) rubber.

This stuff is used on car parts for water sealing. It can resist many chemicals. I used it on my first water cooling setup (can be seen on pictures). With this stuff, you can build a perfect “soft rubber” gasket in the form you desire. But beware, although it can easily be removed from plastic any time you like, once it sets, it can not be cleanly removed from PCB surfaces (at least I couldn’t). So if you spill it on your board/CPU most probably you will have some traces left. (I had)

If you plan using thin hoses, or a small water jacket (like I do), you definitely need a pump that can create pressure. Most aquarium pumps (that’s what a lot of people like me use) can pump enormous amount of water (high gph value) if thick hoses are used and a water jacket is not attached.

But when you put some resistance in the system (like thin hoses, radiator or a jacket with thin channels) water flow decreases unbelievably as these kind of pumps can not create enough pressure to maintain the flow through resistance.

In a circulatory system, the maximum height water travels through is not important. It can only be a problem at the circulation start. But after that, even the worst pump can send the water as high as you want, because when the water is circulating, it also travels down as much as it travels up.

But the “head” value is important as is shows the pumps ability to create pressure (thus maintain high water flow) under resistance. The system is same with an electrical one. Hoses are like your wires, when they are longer, they have more resistance and when they are wider, they have less resistance. When you put a Jacket or a radiator in between, you add more resistance to the system. The amount of water flow (like the current in an electrical system) depends on the power of your source, the pump in our case.

Thanks! First, let me thank all of you who wrote AMD when I asked, and who sent me copies of their “answer.” It sure took them long enough, but AMD finally came up with an “answer.” Does it answer the