Netbooks have almost overnight carved out a strong and growing market segment. One key question : What will the dominant OS will be for these diminutive laptops?

Impressive numbers but let’s put these in perspective:

IDC forecasts 2009 total PC shipments at about 324 million units worldwide with notebooks accounting for about 178 million units – netbooks then represent about 12% of notebook sales and 6.7% of total PC sales.

Longer term, Displaybank projects netbooks to account for about 19% of the notebook market by 2012, with shipments reaching about 45 million units. 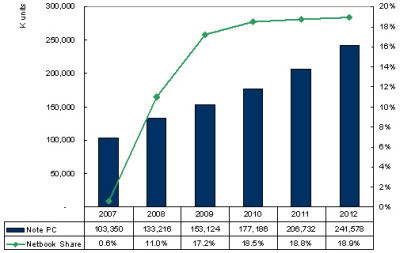 While seemingly a niche compared to the overall PC market, these are not chicken feed numbers – manufacturers are not going to let a power hungry, bloated OS deep-six this market with hardware requirements that are incompatible with the netbooks’ price point and power profile.

So a key question: Considering the low powered, relatively modest CPUs netbook manufacturers are using to power netbooks, an OS such as Vista/Windows 7 would seem to be a non-starter. In fact what is keeping XP around is the demand for a modest OS which fits the netbook’s modest power profile.

What then might this portend for Microsoft’s “bigger is better” OS strategy?

A few scenarios come to mind:

XP lives on: In one form or another, XP is resuscitated/repackaged for the netbook segment.

Windows 7 “Lite”: Bowing to demand, Microsoft steps back and slims down Windows 7 to conform to the netbooks’ power profile.

Netbooks beef up CPUs: Responding to an OS which requires more horsepower, netbooks move up the power curve and blur the line between notebooks and netbooks.

Linux steps up: Microsoft sticks to Windows 7 with its hefty power penalty and manufacturers turn to Linux as the OS of choice.

There’s no doubt that more horsepower will finds its way into netbooks; however, the design constraints are pretty severe – to keep costs down, more power is not the way to go. According to Gartner Research Director Annette Jump:

“The demand for mini-notebooks will be driven by several factors: by their small form factor and small screen, their light weight, their price, their ease of use and their basic, but sufficient, PC functionality [my emphasis].”

“Mini-notebooks are likely to attract a variety of users with different usage scenarios: content consumption, Internet browsing, e-mail, instant messaging (IM), keeping in touch with friends and family, storing and sharing pictures, and so on. Potential users are likely to include both first-time buyers seeking a low-cost introductory PC as well as experienced users seeking a low-cost second or third PC for themselves or a relative.”

Accepting that CPU power will increase modestly, a power hungry OS requiring more horsepower and upgraded graphics does not seem like a good match. So can Linux step up to the plate and finally play in the big leagues?

As much as I like and use Linux (Ubuntu), the fact remains that Linux netbooks are returned about four times more than XP powered versions. IMHO Ubuntu has the best shot at being the OS of choice, but it’s still funky sometimes and forget about adding any Windows software on a Linux netbook (with the exception of WINE or mounting a virtual machine) – probably a kiss of death for casual users.

This leaves Microsoft with a decision – how best to respond to this market?

I would not be surprised to see a Windows 7 “Lite” making a debut sometime next year – I can’t see how, from a marketing perspective, Microsoft allows XP to live on in the face of the “newer and better” Windows 7, although it could be something like an XP-Vista-Windows 7 blend, or maybe even a tricked-out XP skinned out to look like Windows 7.

I believe manufacturers are putting the heat on Microsoft, explicitly or implicitly, for a netbook friendly OS that’s not going to entail over-powering netbooks to accommodate a power-hungry OS. The specter of Linux actually making inroads into a popular product such as netbooks is enough of a thorn in the lion’s foot to prod Microsoft to respond.

Steve Ballmer trash-talks Apple and the PC vs Mac thing starts up again.

How many smartphones have 50,000 downloadable apps?