There’s a new challenger in the world of 3D benchmarking! It’s from a little (un?) known company called Allbenchmark. As the name suggests, it involves a cat. A rather large cat, at that. Want to know more? Keep reading!

What It Is, Where To Get It

First off there is an official trailer.

The basic theme is a deserted city ravaged by some sort of cat flu biohazard. If that doesn’t sound bad enough, it also seems to make cats rather….. big. And give them eye-lasers. And give them a bad attitude. (Though to be fair, I’ve yet to meet an entirely black cat that didn’t have a bad attitude and/or desire for eye-lasers).

Allbenchmark’s goal is said to be making a benchmark that tests your entire system from a gaming perspective. Not just the GPU, not just the CPU, not even just the GPU and the CPU, but the whole operation. This isn’t exactly a new concept, Futuremark’s “PCMark” benchmarks have been around for a long time. That said the PCMark series tests your system for a wide variety of not-at-all-related-to-gaming things (text editing benchmark, anybody?). CatZilla takes a different tact, including not just GPU rendering and a CPU test, but also some game-related GPU bits and a storage test that checks how long it takes the benchmark to load.

The controls are nice and simple. There are four presets labeled with various cat sizes representing the various resolutions, as well as a Custom selection if you want to set things up in non-standard ways.

I’m not going to go into a ton of detail as to what happens visually in CatZilla as I’d much prefer you download it and try it yourself by clicking this link. I will say that it has a refreshingly realistic CPU Physics test, a test that actually looks modern for a change!

I absolutely love the concept of a modern 3D benchmark that isn’t part of the 3DMark series. They’ve held the reigns on the entire market for so long, it’s refreshing to have another option. So refreshing that I couldn’t help myself and am throwing a competition based on it!

This competition is open to all Overclockers.com forum members, if you’re interested and are not a member it’s time to register and join us! The prizes are limited, but it will be good fun.

The rules are simple, run the benchmark on Tiger settings (1080p), when you get the completion window open up CPUz’s CPU and Memory tabs as well as GPUz, take a screenshot, and post it in the competition thread. Please use this background: Background Download Link.

Any number of GPUs, any CPU/GPU/Memory clocks, any cooling, this is a wide open free for all.

The prize for the highest score is a volt modded (by me) GeForce 7300 LE 128MB DDR2 GPU. If the competition gets more than ten submissions, I will add a random draw prize of some sort, that prize is as-yet unknown. Knowing me, probably another volt modded GPU. Maybe a pile of older CPUs. Who knows? Not me.

One important thing! This is a BETA benchmark, if you can find a way to cheat, lie, steal, hack, or anything else your way to a higher score please let me know how you did it (with a results screenshot) via PM. This information will be given to the benchmark authors to help prevent it in the future. If a few exploits are discovered, I’ll likely add a random draw prize for that too, so have at it.

This is what your screenshot should look like (you don’t have to use pink window borders): 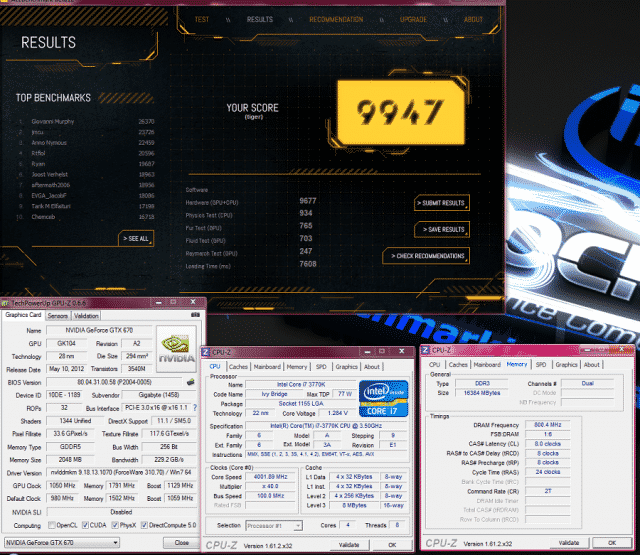 The discussion thread for this competition is here: Competition Thread.